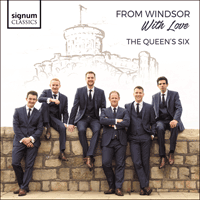 From Windsor with love

The Queen’s Six are serial offenders when it comes to the transgression of any musical taste, and this latest album—created under the watchful eye of legendary record producer T J Armand—revels in the genre-bending possibilities of love-themed 'pop'.

Historically, The Queen’s Six has always performed arrangements of pop songs. It was one of the main reasons for the group’s inception in 2008, also the 450th anniversary of the Accession of Queen Elizabeth I, from whom they take their name. This juxtaposition of old and new has always been a big part of Q6’s ethos: there are rich rewards to be gained from both the beautiful, sonorous church music they perform, and their fun, tongue-in-cheek pop and jazz arrangements. Coaxing the wit and charm out of these songs has been a main part of their raison d’être since day one.

So why make a pop album now, and why these songs? From Windsor with love was first conceived working with US Producer TJ Armand in 2019. Armand was at the time the Director of the Bermuda Festival, where the group performed in the same year. Their journey to Bermuda once again typified their mixture of styles: they flew directly from New York City where they had performed two programmes of church music at the Met Cloisters, to the wonderful island of Bermuda, where they were in the same festival brochure as Chaka Khan. After years of performing arrangements of pop songs, their meeting with Armand was the spark that lit the fuse for this album.

The curation of From Windsor with love was not entirely plain sailing. As part of their job as singers in the St George’s Chapel Choir, Windsor Castle, members of The Queen’s Six sang at the wedding of Prince Harry and Meghan Markle in 2018. The album was therefore initially intended to be mash-ups of US-style wedding songs. However, with the onset of the coronavirus pandemic, the originally intended romantic hue of these songs took on a new meaning, one not just of love, but of unity in the face of adversity. The symbolism of songs such as Heaven is a place on earth and Stand by me became especially poignant, and so the project took on a new dimension.

With their madcap on-stage antics, and their love of pushing the boundaries of what’s 'acceptable', The Queen’s Six couldn’t make such an album without choosing some unusual songs. Here you’ll find more traditional classics such as Bob Dylan’s Make you feel my love, and Young and Heyman’s When I fall in love, next to Huey Lewis and the News’ The power of love, and Limahl’s Never ending story (the fact that members of the group grew up with the films that made these two songs famous helped in the decision-making process). The first three of these were arranged by long-time Q6 collaborator Stephen Carleston, and they show his extraordinarily wide-ranging gifts. In the hands of arranger Ruairi Bowen, Never ending story becomes a sort of rhapsody on Giorgio Moroder’s original music.

Staying in the 1980s, Belinda Carlisle’s Heaven is a place on earth gets an early-Baroque-style treatment. Sometimes it can take a while for a cappella arrangements to take shape, but Miguel Esteban knew exactly what he wanted to do with it from the outset. Alternating sections of quasi-Baroque vocal writing and close harmony, Esteban creates something that is true to Q6’s roots, whilst retaining the beauty of the original song. Taking us a bit more towards 19th-century Germany, Simon Whiteley’s arrangement of Richard Marx’s Right here waiting is perhaps more of a Brahmsian lullaby, dream-like and hypnotic. Rock legend Van Morrison’s romantic ballad Have I told you lately gets more of a jazzy treatment in Tim Carleston’s arrangement, which is more akin to Rod Stewart’s version of the song.

Back a bit further to the 70s, and two R&B classics: Grover Washington Jr and Bill Withers’ Just the two of us has a slightly understated groove feel in Tom Lilburn’s arrangement; and in his arrangement of The O’Jays’ Now that we found love, Louis Marlowe carries on this slightly funkier style. Billy Joel’s Just the way you are completes a triptych of '70s gems, with the crooning tenor solo line interrupted only by a jazz bass section, and an alto 'instrumental' break.

Coming a bit more up to date, and a song not readily imaginable as an a cappella cover, Tom Lilburn’s version of The Proclaimers’ 90s hit, I’m Gonna be (500 miles), recaptures some of the song’s romantic heart, whilst retaining its inexorable vigour. And bringing us much closer to the present day is Ruairi Bowen’s arrangement of Sufjan Stevens’ Mystery of love. Another song made famous by a film (2017’s Call me by your name), Bowen coaxes all the laid-back rhythmic interest from Stevens’ original by way of intricate, almost bird-like vocal lines.

One song that has survived from the initial plans for an album of ‘wedding songs’ is Stand by me. The group first heard this arrangement of the Ben E King classic as they prepared for Prince Harry’s wedding back in 2018. As they sat in the choir stalls, the sound of this song suddenly began to drift up from the other end of the Chapel. Karen Gibson and The Kingdom Choir’s rendition in an arrangement by Mark De-Lisser touched them in the most extraordinary way. Understanding that imitation is the highest form of flattery, and with De-Lisser’s very kind permission, the group made their own, purely a cappella arrangement of this song.

There’s nothing Q6 likes more than singing these pop songs, and the celebratory interaction with the audience they afford. As the dust settles after the pandemic, and touring becomes a possibility again, the group is looking to the future, hoping to bring its signature blend of old and new, serious and fun, to an ever-wider following.