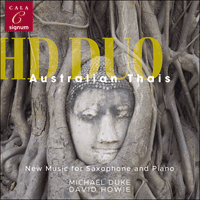 New music for saxophone and piano

First performing together in 2008, Michael Duke and David Howie have always put exciting and innovative chamber music at the heart of HD Duo’s repertoire. For this album they have commissioned new works from six composers, three Australian, three Thai.

The initial impetus of this project came from David Howie’s Thai family connections and the shared interest to explore the connections between the music and people of both countries. In 2009 Duke and Howie travelled to Bangkok to perform at the World Saxophone Congress. Since this initial trip they have been looking to return to share more music of Australia in addition to bringing the incredible but seldom heard Thai compositions back home.

For this Australian Thais project, HD Duo has collaborated with some of Thailand and Australia’s premiere composers to commission, workshop and produce new music for a cross-cultural exchange aimed at enhancing and strengthening links between the two countries, greatly increasing cultural awareness and understanding through music. This project was made possible by a Sydney University, Conservatorium of Music internal research grant.

Matthew Orlovich Hurly burly for B flat soprano saxophone and piano
This is the only work on this recording that wasn’t commissioned especially for this project. It was commissioned in 2015 by Australian saxophonist, Simon Watts who also gave its premiere performance alongside David Howie. This is the premiere recording.

Of the work Orlovich states: 'The score comprises three movements. The first and third movements are the more illustrative of the work’s title with urgent rhythms and highly chromatic melodic lines creating a highly energised mood. The middle movement, marked ‘Reverberant’, steals us away to a place of relative tranquility. Here, the saxophone and piano intermingle in an atmosphere of echoes and windchime-like figurations.'

Gerard Brophy Dervish for alto saxophone and piano
In 2015 the great Senegalese master drummer Doudou N’Diaye Rose died in Dakar, Senegal not long after celebrating his 85th birthday. He had been born into the griot, or storyteller, caste and as a consequence, he chose the path of a percussionist/composer/band leader and in turn he himself sired an entire generation of musicians. Of his over 50 children, I have had the honour and pleasure of working with more than half of them on various exciting projects both in Australia and abroad.

On learning of Doudou’s demise, I was moved to compose a tribute to this dynamic, engaging and irresistible human being, somebody who had brought so much joy and inspiration to the world.

Dervish was commissioned by Michael Duke and David Howie and it is a testament to their virtuosity and inspired musicianship.
© Gerard Brophy

Tim Dargaville Water has no equal for soprano saxophone and piano
'Under heaven nothing is more soft and yeilding than water, nothing is better, it has no equal' (Lao Tzu, Tao Te Ching, Book II)

Water has no equal is part of a collection of works inspired by the enigmatic writings of the ancient Chinese sage Lao Tzu, author of the Tao Te Ching. My father Doug gave me his copy of this mysterious and illuminating text when I was a teenager, and it has given much nourishment and insight over the years.

This work for soprano saxophone and piano was commissioned by Michael Duke and David Howie of HD Duo, and is at heart a contemplation on the influence and power of water, as phenomenon and metaphor, inspired by Lao Tzu’s poetic writing. I hesitate to say that this work is intended to be a deliberate depiction of water, as I feel that music can only really be about itself rather than something else. But curiously present are rippling patterns that flow gently outwards into larger wave forms, growing in intensity, which are then later on reflected back as if on water’s surface.
© Tim Dargaville

Narongrit Dhamabutra Three Spirits of ASEAN for alto saxophone and piano
The Chant of Rattanatri: Inspired by the temple sounds of small and large bells, vibrating through the air, merging with the peaceful Rattanatri chanting (the Buddhist chant of The Three Jewels, encompassing Buddha, Dharma, and Sangha).

Gala: The movement is constructed in a ternary form, in which the first section depicts the face of Gala, one of the Hindu Gods. The middle section is a modification of the Khamen Kruan melody played by the saxophone while the piano provides dissonant chords scattered in several registers to depict gong sounds. The return of the first section, this time enhanced with retrograde technique to represent that Gala finally has to devour himself.

Kakula: This movement is inspired by the Kakula, a folk instrument circulated in the group of islands in the southern region of the Philippines and the Sulawesi Island of Indonesia. Kakula comprised of 5-9 gongs laid in a wooden frame and played with 2 wooden mallets. The movement is constructed in a mosaic form, a form comprised of several melodic fragments similar to a picture created by several mosaic tiles. At the conclusion of the movement the tempo is accelerated with a rapid force, bringing the ending to an astonishing moment.

Denny Euprasert Isaan for alto saxophone and piano
Isaan is an original composition commissioned by the HD Duo. Isaan (or Isan) is the Northeastern region of Thailand where the composer’s grandparents lived. The work is inspired by the childhood memories of places and the music of the region. The impression of Khaen, a Northeastern free-reed instrument, can be heard in a few sections, though the composer did not use any specific quotations from the Northeast. The pentatonic scale, however, is used throughout the piece.