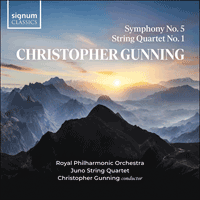 Symphony No 5 & String Quartet No 1

Two further works from Christopher Gunning, whose previous symphonic output has been welcomed by the BBC Music Magazine as revealing 'a substantial concert composer' producing distinctively 'personable and communicative music'.

Symphony No 5 was composed during 2009 and is my most ambitious to date. Unlike numbers 1, 3, 4, 6 and 7, which are continuous, it is in four extended movements. There is no strict programme, but the music moves through several phases which could be said to correspond to one’s journey from birth to death. The symphony is dedicated to the memory of my sister Rosemary, who grappled with illness throughout the composition of the work, and died as I was completing it.

The first movement is both lyrical and dramatic; it commences with motifs heard in woodwind flourishes, the notes of which will be used in various transformations during the course of the symphony. Otherwise, the movement is shaped roughly like a 'classical' first movement, with themes derived from the woodwind figures, a central development section, and a recapitulation complete with a return of the the opening motifs. The second movement is far gentler, and here I was pondering on my own childhood and the early years of my four beloved daughters. A soft flute theme gives way to grander sections, as well as more playful music.

The third movement is about vitality and adventure. It is very energetic, with some lighter sections and some progressively stormy or even warlike music; there’s a crash of thunder at the climax, after which things subside and the movement ends as it began. The last movement is the most extended. Some of it is turbulent, some fiercely dramatic, and some expressive. Finally, the music returns once again to the opening motif: 'dust to dust and ashes to ashes'. The Royal Philharmonic played their socks off during two exhilarating days at Air Lyndhurst Studios.

My string quartet was composed in 1999, and revised in 2006. Each of the four movements is based on on a three note motif, C-D-G, with its four possible transpositions. The first is an arch-shaped passacaglia, and the secondis a fast semi-fugal scherzo. The third is quietly expressive and the last is a bright rondo with ostinati based on the 3-note idea.

The Juno Quartet, Jacqueline Shave, Magnus Johnston, Claire Finnemore and Caroline Dearnely, gave their all and were absolutely lovely to work with.