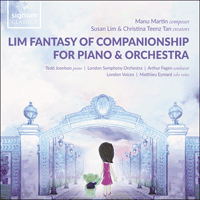 Brought together under the watchful eye of composer Manu Martin and others, this piano and orchestra suite takes the listener into a world of artificial intelligence and a toy lion called Alan.

For over a decade, my partner in the operating room has been a robot surgeon. Outside of surgeries, I have noticed the changing landscape of companionship driven by two forces facing us in society today: longevity and loneliness, on the one hand, and disruptive new technologies on the other.

This, coupled with a love for music, and a great partnership with composer and orchestrator Manu Martin, led me to imagine a futuristic companionship between Human and Inanimate, life and non-life, in this post modern classical work, the Lim Fantasy of Companionship for piano and orchestra.

Created and composed in 2019, it draws inspiration from the original songs composed by Joi Barua, Ron J Danziger and Matthieu Eymard, for the ALAN the Musical soundtrack. The Fantasy imagines—with compassion. sensitivity and with optimism—what possibilities may exist for a future companionship in this new world order of synthetic life forms and embodied artificially intelligent inanimates.

Who is ALAN? A plush inanimate baby lion with a soul, who craves the new science of synthetic DNA, and the new disruptive technologies to become an enabled companion. It pleads for some intelligence, perhaps a sprinkling of artificial neurons embedded in its cotton-filled head, that may enable it to communicate a little louder than the imaginary whispers which reach its partner's ears as an echo of her own thoughts. It demands respectability.

The lnanimate's journey unfolds through the six acts of the Fantasy, artfully delivering the storyline of ALAN the Musical. It culminates in a riveting musical climax of 'Teleportation' and an ultimate, shared existence through the phenomenon of quantum entanglement; two hearts, one soul.

It is after all a fantasy, and one Christina Teenz, co-creator and I, hope you will enjoy.

An idea
It started at an INK conference in Hyderabad 2017, with an invitation to speak at a session 'Giant Leaps: Thrilling potential of Al and Robotics'. I chose the topic 'The Future of Companionship', and partnered in a duet with an inanimate ALAN in the form of a hologram.

The ALAN hologram opened with an invitation to an audience of some 1200 delegates to 'spend a little time with me', and enthralled with a fascinating escapade into a world of artificially intelligent companions, blurring the line between human and inanimate.

INK musician Joi Barua then joined us on stage to perform our joyful ALAN song, the first musical composition for ALAN along the path to the Fantasy. In that moment, staring into a vast hall of attentive faces, it dawned upon me that music was the perfect medium to communicate and open up a discussion on the sensitive, controversial topic of what is life and what is non life, which I realised was no longer just confined to my profession.

Inspiration
And so the musical journey began, with Matthieu Eymard (France) and Ron Danziger (Australia) coming on board with Joi Barua (India), to compose 15 original ALAN songs, to lyrics penned by Christina Teenz and myself, co-authors of a script for a musical ALAN.

The trio of composers from three continents, coming together to produce just the right mix of contrasting moods, unfolded the musical journey of a soul from wild (animate), to captive (inanimate), and ultimately to being quantum entangled with its human companion.

The making of the Fantasy
In the spring of 2018, the brilliant young French composer, Manu Martin, together with project manager Matthieu Eymard, experimented with adding strings to our songs. Listening to the compositions, I was delighted by a newfound elegance to our music, and an eloquence in which to communicate what was otherwise perceived as a cold, intimidating topic of a future companionship with artificially intelligent inanimates.

Brainstorming together, I asked, 'what if we orchestrate all our ALAN songs and string them together to tell the story?'. Overnight, a Fantasy was conceptualised.

Seeking validation of this idea, I contacted the renowned, retired pianist Tedd Joselson in New York. The events that followed are best described in a transcript of a Scala Radio Interview hosted by Simon Mayo on the eve of the recording of the Fantasy:

Susan: The most thrilling thing to me about creating this Fantasy, was to be able to pull Tedd Joselson out of retirement, because he had been in retirement for some 15-20 years. I first approached Tedd when I was in Rye, a small historic town in upstate New York. And I remember sitting with him over lunch in a French restaurant La Planetiere , set in a very elegant and historic home. And I thought, 'oh, this is my only chance'. So I put my set of airpods next to his silver fork, and I said: 'Tedd, would you listen to some of my music from ALAN the Musical'. The look on his face … he was aghast at the thought of disrupting the elegance of the whole ambience, but subsequently …

Simon Mayo: So you're at dinner, and he's got his cutlery, and you've got your airbuds, and you put your airbuds in front of him, to try and persuade him to be a part of the project. And does he put your headphones in his ears?

Susan: And then, he came back to me a couple of weeks later. And he said 'Susan, I've decided to come out of retirement, I shall return to the studio, and record the Fantasy'.

It was what I needed; Tedd's validation and acceptance to be the pianist for the Fantasy.

… I hereby humbly commission you to compose me a piece, a Fantasy for Companionship for piano and orchestra. Let it be fresh, innocent; a free-flowing piece with underlying optimism (not dark), incorporating traits present in our repertoire of 15 songs … Do write a fantasy which unfolds as an endearing story . of hope for the future of companionship. It is a fantasy, because it is about synthetic life, it's central character an inanimate, ALAN. Through the inanimate's innocence, loyalty, indulgence in science fiction and enabling technologies, and it's epic struggle for immortality … Let it challenge concepts of companionship through a smattering of animate sensibility and inanimate madness.

Let the music begin as magical, and as it unfolds, do portray optimism and intrigue, command Respect, show indignation, with hints of inanimate madness, yet let it be also gentle, a lullaby, in parts … proposing a partnership between human and inanimate, the future of companionship.

Let the story of ALAN unfold, through our repertoire of songs … do create a magical intro … teasing a/most, inviting … as a wild becomes a captive.

Capture the WILD with a bit of African ('Jungle Song') let the audience feel a gentle breeze, the law of the jungle, and a playful lion cub ('Alan Song').

Transition to a SOUL set free—spiritual, daring, a broken heart, sobbing sounds as it is windblown over jungles, as it lays it's eyes on it's land one last time, and sets out on an epic adventure to new beginnings, a brave wanderer, crossing timezones, alone, (ORIGINS) then arriving in a new land …

Change of scene—a world of plush inanimate companions and LIFE ON THE SHELF Running in parallel, a world of human companionship (COMPANION FRIEND), and as the fantasy unfolds, let it … blossom into human-inanimate companionship—initially an exp'oration and first steps with (OFF TO COLLEGE), on to TIMELESS and climaxing with the beautiful ODE TO ALAN …

Let the realism of mortality … be portrayed first as playful exploration with SYNTHETIC DNA 'please let it be, that someone makes a brand new me'', to a bold indignant demand for enabling technologies in striving toward immortality … a powerful … challenge of the status quo in NEW WORLD ORDER.

Let the realism of science and its challenges be portrayed in EVIL PROFESSOR and BOY SCIENTIST—conveying the message 'nothing worthwhile is easy'. The story builds up to a transition from a fascination in future science … to an obsession. And when the lure of future science consumes an inanimate craving a lifetime of companionship with it's partner through immortality, let the plea of the inanimate for entanglement, a shared existence … be heard through the strings of violins in TELEPORTATION … the climax of the Fantasy, it is after all, a fantasy, TELEPORTATION.

Then a scene change … with a triumphant celebration … in TRIBAL BUSHMAN SONG—as the tribal bushman and tribe proudly lead the inanimotes down the aisles of an auditorium to the rhythm 'African rhythm to algorithm'. They celebrate a new day, 'from Jungle law it was before, heretofore the Quantum law' … a fait accompli, celebrating an entanglement of souls—human-inanimate partnership, a new culture of Companionship.

And so, faithfully adhering to the guidelines, the brilliant Manu Martin set about to compose the Fantasy in six Acts, comprising 21 tracks, each Act unfolding a different scene, with the DNA code of the inanimate, embedded in the music.

Susan Lim created this story and described it to me precisely, which allowed me, with her, to build a musical setting, a musical tale, while respecting the piano solo, which was to be the framework of this work for piano and orchestra. The addition of tribal percussions, such as Taikos, is not so common in classical writing, and this mix with new technologies prompted me to orchestrate with pop/ rock instruments, such as drums, bass, electric guitar—the crossroads of two worlds, classic and modern. The opportunity to work alangside and to share Susan's vision of companionship for the future and to compose the Fantasy of Companionship for piano and orchestra has been the most extraordinary and uplifting experience of a lifetime for me.

The recording at Abbey Road
What a magnificent day it was, 19th November 2019, as the ALAN team members arrived at Abbey Road Studios from around the world to record the Fantasy.

Proudly, on the floor, in the control room, viewing galleries, and from the balcony of Studio One, the ALAN team watched, spellbound. some with tears of joy, as the first sounds of the Fantasy Overture was played with grandeur and magnificence by a 78-strong London Symphony Orchestra, conducted by Arthur Fagen and with Tedd Joselson on piano.

A choral ensemble of 36 London Voices recorded the next day, directed by its charismatic founder Terry Edwards and co-director Ben Parry. There was a mix of emotions. intense and raw, that added to the celebrations, and to the colour, temperature, blood, sweat and tears of the two weeks from the recording to the mixing sessions.

In January 2020, the Fantasy journeyed across the Atlantic to be mastered by Greg Calbi, at Sterling Sound Studios, New Jersey, 'accompanied' by Christina Teenz, Matthieu Eymard and me. Shortly after. the world was engulfed in a Pandemic, and much of the music industry came to a deathly standstill.

Thankfully, as we enter 2021, there is light at the end of the tunnel, and it is with much pride and joy that we now get to share our Fantasy with the world.