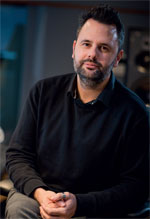 born: ?
country: France
Manu Martin graduated at the age of 16 from the Conservatory of Bordeaux with a jury 'Special Mention'. He then joined the Faculty of Musicology of Toulouse and Bordeaux, where he completed a Masters in Musicology. He moved to Paris to pursue a career as a pianist and composer, composing music for television and radio. Martin has worked alongside acclaimed French artists and more recently composed six of the tracks from Florent Pagny's chart-topping, platinum album 'Aime La Vie'. In 2017, Manu Martin joined Dr Susan Lim's ALAN project both as a musician and music arranger, together with Matthieu Eymard, Music Director, for the ALAN the Musical project. In November 2018, he was commissioned by Susan to compose the Lim Fantasy of Companionship for piano and orchestra. In addition to the glorious orchestration of all of the ALAN songs, Manu composed the opener to the Fantasy, the grand, suspenseful 'Overture', and the following transitions: the arresting, melancholic 'transition to Origins' in Act 1, the teasing, fairy-like 'transition to Companion Friend' in Act 2, the romantic duet of cello and piano in 'transition to Ode to ALAN' in Act 3, the poignant, theatrical piano solo in 'transition to New World Order' in Act 4, the delightful, teasing piano solo heralding the 'transition to Boy Scientist' in Act 5, and the bold, deterministic piano solo in the 'transition to Teleportation' in Act 6.