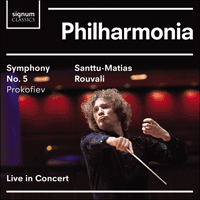 Prokofiev himself conducted the first performance of his fifth symphony, given in Moscow on 13 January 1945 with the sound of artillery famously in the background. It remains to this day one of the composer's most popular works.

Following the Russian Revolution, both Rachmaninov and Prokofiev emigrated to America, where Rachmaninov became the leading Russian pianist, stymying Prokofiev’s ambitions. He lamented: 'The public here is not used to listening to the works of a single composer for a whole evening. People want a varied programme as a showcase for popular pieces. Rachmaninov has accepted this compromise. I could not even dream of the overwhelming success he has with his concerts.' This rivalry may have coloured Prokofiev’s perception of Rachmaninov’s music: 'There were certain melodic turns typical of him that were extraordinarily beautiful. But all in all there weren’t many of them and once they had been found, they were repeated in other works.'

Rachmaninov’s dominance was one of the reasons that Prokofiev left America; he returned to Russia in 1936. Prokofiev’s Symphony No 5 followed in 1944, 14 years after his previous symphony. Prokofiev described his fifth symphony as a 'hymn to free and happy Man, to his mighty powers, his pure and noble spirit', explaining that, 'I cannot say that I deliberately chose this theme. It was born in me and clamoured for expression. The music matured within me. It filled my soul.' Prokofiev’s words echo the dogma of ‘Socialist Realism’ outlined by the Composers’ Union in 1933:

The main attention of the Soviet composer must be directed towards the victorious progressive principles of reality, towards all that is heroic, bright and beautiful. This distinguishes the spiritual world of Soviet Man and must be embodied in musical images full of beauty and strength …

Prokofiev stayed at a country retreat run by the Composers’ Union in the summer of 1944, when the symphony was composed. He wrote: 'I consider my work on this symphony very significant both because of the musical material put into it and because I returned to the symphonic form … The Fifth Symphony completes, as it were, a long period of my works.' Composer Dmitri Kabalevsky, who helped to establish the Composers’ Union, described the symphony as 'first of all humane, second of all symphonic, and third of all simple—though without a loss of character'.

The first movement shows the influence of Shostakovich in its steady pacing and dense scoring. There follows a crystalline ‘Scherzo’, including music originally intended for Prokofiev’s Romeo and Juliet. The ‘Adagio’ features a mournful waltz originally planned for Prokofiev’s film score, The Queen of Spades, and the finale begins with a gentle introduction before unfolding in a spirit of optimism. The work was premiered on 13 January 1945 in Moscow, with Prokofiev conducting. Pianist Sviatoslav Richter recalled that the symphony reflected a sense of imminent victory in the Second World War:

I will never forget the first performance of the fifth symphony in 1945, on the eve of victory … This was Prokofiev’s last performance as a conductor … when Prokofiev stood up, it seemed as if light poured directly on him from somewhere up above. He stood like a monument on a pedestal. And then when Prokofiev mounted the podium and silence set in, artillery salvos suddenly thundered. His baton was already raised. He waited, and until the cannon fire ceased, he didn’t begin. There was something very significant, very symbolic in this. A sort of common turning-point had come for everybody … for Prokofiev as well.