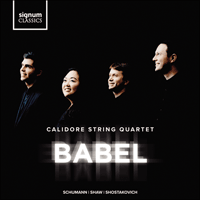 Praised by the New York Times for its 'deep reserves of virtuosity and irrepressible dramatic instinct', the Calidore String Quartet here presents a compilation of quartets by Schumann, Shostakovich and Caroline Shaw.

The year 2020 is the most unsettling of our quartet’s decade-long existence. The inestimable impact of Covid-19 brought the entire world to a near stand-still. On the exterior, traffic has diminished, the economy has slowed, and most public gatherings, including our concerts, are cancelled indefinitely. Thus, physical human interaction is at the lowest level of our lifetime. But within our homes and in the virtual realm, the world is buzzing with activity, evidence that the will to express and communicate with one another is perhaps our strongest inner force, second only to our will to live.

The desire to explore the innate human drive for communication is the focus of Babel. For this recording, our quartet gathered music which transmits ideas by imitating language; its rhythms, cadences and intentions. But it also explores what happens when music substitutes for language. When it fills the void of forbidden speech or even how it carries on when language has been exhausted.

The result, a compilation of quartets by Schumann, Shostakovich and Caroline Shaw, demonstrates the visceral forms of expression that exist at the intersection of music and language. Furthermore, it shows the evolution and resilience of this duality over three periods of human history.

The convergence of music and language is a phenomenon that fascinates Pulitzer Prize-winning American composer Caroline Shaw. In 2016, Shaw was deeply troubled by the national unrest leading to and resulting from that year's presidential election. Much like in the Covid-19 epidemic, she saw language being used to spread information about current events but also, and increasingly, to spread confusion and misinformation. This was the catalyst for a collection of Three Essays, which were written for and premiered by our quartet at the BBC Proms in 2018. Shaw’s Three Essays address language’s power to stir emotion and spread information and ideas through written, spoken and digital forms.

The ‘First Essay’ subtitled ‘Nimrod’ alludes to the biblical figure of Nimrod, overseer of the construction of the Tower of Babel. The story, which seeks to explain the origin of the world’s languages, takes place following the Great Flood, when all of mankind speaks in a common tongue. Led by Nimrod, the human race seeks to construct a tower tall enough to reach heaven. In response, God confounds their speech, making the builders unintelligible to one another and halting the construction.

Shaw takes the idea of language’s potential to communicate and miscommunicate and encodes it into a series of unrelated sections of material that imitate the lilt and flow of spoken language. Shaw then weaves these disparate parts and disintegrating material together with colorful and imaginative transitions. The music of these transitions picks up where the language-like fragments leave off in order to unite the work as a compelling and cohesive whole.

Shaw writes that the ‘Second Essay: Echo’ 'touches on a number of references: the concept of the ‘echo chamber’ that social media fosters in our political discourse; the ‘echo’ function in the Hypertext Preprocessor programming language; and of course the effect of an echo'. This slow movement follows a simple harmonic progression which over time picks up tempo until it reaches the climax, a loop ending in a frenzy of incoherence. The idea of our social media accounts as an echo chamber for our own opinions is a well-documented trend across the globe. The cacophonous climax of this movement demonstrates the potential disintegration that comes from hearing only the echo of our own opinions.

The ‘Third Essay: Ruby’ brings the philosophical and musical elements of the first two essays together. Continuing in the vein of fragmentation explored in the ‘First Essay’, the ‘Third Essay’ attempts to tame it into a logical order. According to Shaw, 'the title [Ruby] refers both to the programming language Ruby (developed in Japan in the mid-1990s), as well the simple beauty of the gemstone for which the language was named'. The music is dotted with repeated and insistent D’s which seem almost like a binary code surrounding the melodic fragments. The ‘Third Essay’ points to the increasing integration of language and technology in our society’s future.

While Caroline Shaw provides a commentary on our contemporary social dialogue, Dimitri Shostakovich illuminates music’s power to substitute for language as an act of defiance in Soviet Russia. In 1962, Shostakovich’s thirteenth symphony was condemned and censored for its setting of Yevgeny Yevtushenko’s poem entitled Babi Yar. The poem evokes the massacre of the Jews at Babi Yar (Ukraine) by the Nazis. The Soviet government’s authorities refused to recognize or allow remembrance of the atrocities committed at Babi Yar. Yevtushenko’s text was laden with references to Soviet and German anti-Semitism as well as the Holocaust and thus was interpreted as having anti-Soviet sentiment. Despite its well-received premiere, the text was revised under tremendous pressure from the government. Very few performances followed the premiere and Shostakovich’s masterpiece sunk into obscurity in the Eastern Bloc.

For two years, Shostakovich did not compose another concert work. But when he did, he began work on his ninth string quartet. Undeterred by the pressure of censorship surrounding the thirteenth symphony, he once again used his music as a way to communicate that which he could not say.

On the exterior, the ninth string quartet is one of the most uplifting and optimistic in the cycle of Shostakovich’s fifteen quartets. Such an aesthetic put it clearly within the strict guidelines of the Soviet ‘Pure Music’ regulations, making it immune to censorship. But beneath the music’s surface lies Shostakovich’s use of Jewish idioms, a symbol of his own defiance. Polish cultural journalist Marlena Wieczorek writes of Shostakovich’s Jewish themes: 'The Jews’ fate was for him a metaphor of humanity’s lot; a symbol beyond nationalism, an icon of the world’s meanness, a proof of how defenseless man is. This same defenselessness and hurt in man could in fact be found in Shostakovich himself. The suffering of Jews was for the composer a representation of his own situation, because many times he was also rejected and condemned—often as if an alien in his own country.'

The work is constructed in five movements which are connected without pause. The first two movements have a searching yet optimistic sentiment to them. The third unleashes a crazed polka which continually revolves around a nearly obsessive quotation of the famous theme from Rossini’s opera William Tell. Only in the fourth movement does the music become somber and desolate; the lower strings intone a chant-like hymn punctuated by violent outbursts. The final movement is the focal point of the entire work; filled with fireworks, an extended cadenza for the cello and ripe with the aforementioned Klezmer influence. It is a thrilling and explosive conclusion to one of Shostakovich’s most celebrated works.

Much like Shostakovich, Robert Schumann, during the period of 1835 to 1840, was stifled in communicating his true feelings. Schumann was in love with the young Clara Wieck, a piano prodigy and already famous concert artist. However, Clara was also the daughter of Schumann’s piano teacher, Frederich Weick. Frederich vehemently opposed their union. He made every effort to keep them physically apart and even involved them in a prolonged legal battle. During this tumultuous period much of Robert and Clara’s interaction was relegated to letter writing. It wasn’t until three years after his dispute with Clara’s father over their engagement, that they were married in 1840.

Fuelled by their love’s victory, the summer of 1841 was one of Schumann’s most prolific. The third string quartet was completed within a couple of months and presented to Clara on her 23rd birthday. Through his music, Schumann expressed the relief of finally being able to freely communicate his love for Clara. The third string quartet is saturated with a two-note descending motive, which opens the work, known as Schumann’s ‘Clara Theme’.

After a brief introduction, the first movement commences with a quicker version of the ‘Clara Theme’ that passes through all four voices. The theme then transforms into a soaring melody accompanied by syncopation. He continues to utilize syncopations in the opening of the second movement, a theme and variations. Schumann displays a wide scope of expression throughout the variations; from inward tender moments to wild raucous exclamations. The third movement provides a moment of reflection with its hymn-like opening. Eventually he underpins this tranquil atmosphere with a steady yet insistent rhythmic backbone in the second violin that at times disturbs and overwhelms the established peace. Perhaps this is a manifestation of some of his angst he felt as he realized he would perhaps be seen as a footnote in Clara’s illustrious career. The last movement dispels this uncertainty with a joyous off-beat dotted rhythm theme.

The music encapsulated in Babel is a manifestation of our human yearning to communicate with one another. These notes explore the crossroads of music and language, encapsulating moments of unity and divergence. Despite society’s physical withdrawal due to our current crisis, we hope to use these recorded performances to continue to connect with listeners through the persuasive and committed voices of Shaw, Shostakovich and Schumann.