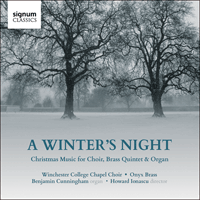 Bringing together a number of works for the specific forces of choir, brass quintet, organ and percussion (some arranged specially), this new album includes the first complete recording of Cecilia McDowall's 'Christmas cantata' in its original scoring, alongside popular favourites from the choir's Christmas repertoire.

The traditional carol I saw three ships come sailing in is believed to have come from Derbyshire, its first appearance in print dating from as long ago as the 17th century. This arrangement for SATB, organ and brass is by Philip Marshall (1921-2005). Marshall’s distinguished career included positions as Organist of Ripon and Lincoln Cathedrals.

Born in London in 1951, Cecilia McDowall read music at Edinburgh University before studying at Trinity College of Music, London. Her composition teachers included Joseph Horovitz and Robert Saxton. Short-listed many times for the British Composer Awards, she has also received diverse commissions. One such request from the Portsmouth Festival Choir resulted in The shipping forecast (2011), which gained wide circulation. One music journal remarked on 'a communicative gift that is very rare in modern music'. Her composition list includes works for orchestra and chamber orchestra, chamber music and choral works. In the five movements of her Christmas cantata A winter’s night McDowall incorporates several popular carol melodies—'In dulci jubilo', 'O little one sweet', 'Noël nouvelet' (originally a traditional French carol, known in English as 'Now the green blade rises'), 'Still, still, still' and 'Sussex carol'. McDowall’s re-creations of these carols, both harmonic and rhythmic, are preceded by, and interspersed with, an introduction and decorative 'commentary' for brass, organ and percussion. The peace and tenderness of 'O little one sweet' and 'Still, still, still' ideally offset the vigorous, extrovert character of movements 1, 3 and 5.

Adam lay ybounden, believed to date from c1400, originated as a macaronic text based on Genesis Chapter 3 and relating to the Fall of Man. The British Library speculated that the text may have belonged to a wandering minstrel. According to medieval theology, Adam remained in bonds with other patriarchs in the limbus patrum (or limbo) from the time of his death until released by Christ’s death four thousand years later. No musical settings from the 15th century have survived, but several 20th-century composers have written choral versions. The one recorded here is by Philip Ledger (1937-2012), who was Director of Music at King’s College Cambridge from 1974 to 1982.

The text of O little town of Bethlehem was written by Phillips Brooks, a Philadelphia rector who was inspired by a visit to Bethlehem in 1865. He wrote the poem for his church three years later and the melody was added by his organist Lewis Redner. However, the best-known setting in the UK is the English hymn-tune known as Forest Green, adapted by Vaughan Williams from an English folk ballad called The ploughboy’s dream.

Puer natus in Bethlehem by Samuel Scheidt (1587-1654) was first published in 1620 as number 15a in the collection of 31 pieces entitled Cantiones sacrae. The text is a hymn for Christmas morning. With its attractive rhythmic swing, Scheidt’s setting conveys the joy of Christ’s birth. The melody itself originates in the 13th century.

See amid the winter’s snow has words by Edward Caswall and music by John Goss. The text of the original hymn was first published in 1858 in The masque of mary and other poems. Caswell wrote these verses soon after converting from the Church of England to the Roman Catholic Church. Goss’s melody dates from 1871. Entitled 'Hymn for Christmas Day', it was included in the 1871 Christmas carols old and new by Henry Ramsden Bramley and John Stainer.

In the bleak midwinter, based on the celebrated poem by Christina Rossetti (published 1872 in the January issue of Scribner’s Monthly) was first set to music by Holst, appearing in The English Hymnal in 1906. (Harold Darke’s setting of five years later is widely popular, even preferred to the Holst setting by many choirs). This instrumental arrangement is by Timothy Jackson, composer, arranger and principal horn in the Royal Liverpool Philharmonic Orchestra.

The text of Away in a manger, derived from passages in St Luke’s Gospel, was believed to be the work of Martin Luther, but later scholarship has found it to be probably of American origin. One of the two most frequently performed musical settings is by the Irish-born William James Kirkpatrick, whose family settled in America when he was still an infant. The carol is generally considered to be among the two or three most popular ever composed. The arrangement recorded here is by Robert Quinney, Organist of New College Oxford.

What sweeter music? by John Rutter (born 1945) was composed for the Festival of Nine Lessons and Carols at King’s College Cambridge in response to a commission by Stephen Cleobury. It was premiered during the 1987 service. The text is adapted from a poem (published in 1648) by the poet Robert Herrick, while Rutter’s setting—the first piece which he composed for this choir—is typically engaging. As it followed the reading about the wise men, it provided an opportunity, he recalled, to emphasise the idea of the gifts we can all bring.

The carol Tomorrow shall be my dancing day is usually described as 'traditional'. It first appeared in print in 1833, included in William B Sandys’ Carols ancient and modern, though the archaic language suggest a much earlier origin—possibly a medieval mystery play. In addition to the David Willcocks arrangement recorded here, there are alternative versions by many other composers including Stravinsky and Holst.

The music of Adeste fideles ('O come, all ye faithful') was long attributed to John Francis Wade, but an earlier manuscript version appeared in 1946, suggesting that Wade may have been merely the copyist. Among the various other composers to whom the tune has been speculatively attributed is King John IV of Portugal (1604-56)—'The Musician King', who amassed one of the largest musical libraries in the world—and anonymous Cistercian monks. The version recorded here is one of the numerous carol arrangements by David Willcocks (Director of Music at Kings College Cambridge 1957-74).

Past three o’clock is an English carol loosely derived from the traditional call of the town crier. With words by George Ratcliffe Woodward (who added some to the original refrain) combined with the traditional tune London Waits, it was published in 1924 in A Cambridge carol book: Being fifty-two songs for Christmas, easter and other seasons. Performed here is a brass instrumental version by Roger Harvey, trombonist with distinguished ensembles including the Hallé Orchestra, the Philip Jones Brass Ensemble and the Academy of St Martin in the Fields.

The holly and the ivy by Jonathan Willcocks (born 1953) dates from 1990. Willcocks, who has many vocal pieces to his name, composed this engaging setting, which bears only the slightest melodic resemblance to the universally familiar tune, for The Bach Choir in honour of the 70th birthday of his father David (1919-2015).

Originally an Irish folk-song, Mater ora filium was very successfully adapted as a carol by Charles Wood (1866-1926), using as a text some anonymous 15th-century words. It is not the only folk-song to have enjoyed a new life as a hymn or carol, a subject which Vaughan Williams covers in one of his essays. Indeed the distinctions between what we term folk-song, hymn and carol are often blurred. Born in Armagh, Wood taught both Vaughan Williams and Herbert Howells. Though best known for his church music, he also composed six string quartets, a piano concerto, a wind quintet, a violin sonata, secular cantatas, solo songs, secular SATB settings and many other instrumental and vocal works. The arrangement of Mater ora filium recorded here is by organist Harrison Oxley and is scored for 2-part treble voices (with optional solos) and organ.

Charles Wesley’s text of what we know as Hark! the herald angels sing first appeared in 1739 in the collection Hymns and sacred poems. Within the carol genre, this has one of the most complicated histories of all. Originally the first line had different words, while Wesley intended the tune to be the same as his Christ the Lord is risen today. The now-familiar music originated in a Mendelssohn cantata (celebrating Gutenburg’s invention of the printing press) but in 1815 it was adapted by William H Cummings to fit Wesley’s words.

The tune of Ding dong! merrily on high first appeared in Orchésographie, a dance-book by Jehan Tabourot (1519-95)—the pen-name (nearly a perfect anagram) of Thoinot Arbeau. George Ratcliffe Woodward’s lyrics were first published in 1924 in his Cambridge carol-book. Mack Wilberg, music director of the Mormon Tabernacle Choir since 2008, arranged the version sung here, with its brilliant organ part, and additional brass parts by Mark Jordan.

The addition of a brass ensemble to Christmas concerts and carol services, combining with the more traditional sounds of choir and organ, has become increasingly popular in recent years. This recording brings together a number of works for the specific forces of choir, brass quintet, organ and percussion, some of which have been arranged specially for this release.

As I began exploring repertoire for this combination, Cecilia McDowall’s wonderful Christmas cantata (the title track of this album) became an obvious central work to record. This contemporary take on five well-loved Christmas carols receives its first complete recording with the original scoring.

Winchester College is very fortunate to have on its staff composer Oliver Tarney. His two arrangements of popular Christmas hymns use the full forces to great and novel effect, and serve to compliment the much-loved David Willcocks arrangement of O come, all ye faithful. Two works already in circulation have been especially arranged for our forces and premiered on this disc: Jonathan Willcocks’s The holly and the ivy and Mack Wilberg’s Ding dong! merrily on high.

Interspersed amongst these works are a selection of popular Christmas carols which have formed an integral part of Winchester College Chapel Choir’s core repertoire for many years. I hope you will enjoy listening to the album as much as we enjoyed making it.