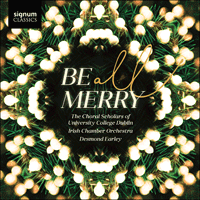 Fourteen gloriously over-the-top arrangements from this most versatile of choirs, some with effervescent accompaniment from the Irish Chamber Orchestra.

In dulci jubilo
The original melody with its macaronic German and Latin text originated in Leipzig in the fourteenth century. The English translation of the German portions (retaining the Latin) was made by Robert Lucas de Pearsall in 1837. In Matthew Culloton’s recent a cappella adaptation (2012), we hear the original melody sung four times, twice by the sopranos and once by the tenors and altos. It is woven through a continuously varied texture in which the 'sweet joy' expressed in the ancient text is happily sustained.

Be all merry
This setting by the Cork composer Eoghan Desmond was commissioned in 2018. A distinctive feature of its fifteenth-century macaronic text is the combination of English and Latin lines in six rhyming quatrains. In the final line of the concluding rhyming couplet, the opening words of another carol are heard: 'Christe redemptor omnium'. The English and Latin words are often heard simultaneously as the choral texture is enriched while the solo violin soars ever higher above the singers’ expressions of joy in celebration of the Christmas message.

God rest ye merry, gentlemen
Dating from the eighteenth century, this traditional English Christmas carol needs no introduction. The Danish composer, John Høybye, also a distinguished choral conductor, captures the joyful spirit underlying its three verses by framing his setting with a lively evocation of bells and he instructs the singers to sing with a smile!

Curoo curoo
An eighteenth-century traditional Irish poem forms the basis of this carol. It is also known as the Carol of the birds, because three of its four verses refer to the lark, the dove, the redbird and the owl who visit the manger to sing 'on Christmas day in the morning' while its refrain concludes with onomatopoeic curoos. In the final verse, the song of the birds is replaced by that of the angels to accompany the arrival of the shepherds. The Irish composer Elaine Agnew wrote this setting in response to a commission by RTÉ (the Irish national broadcaster) in 2008. It is an expressive arrangement for female choir with harp, string orchestra and vibraphone accompaniment, but the wide-eyed owl at Mary’s side in the third verse is singled out for more exciting treatment.

The Adoration of the Magi
W B Yeats’ The Adoration of the Magi (1897) is a short prose essay that concludes with the prayer, written in Gaelic with which Timothy Stephens opens his choral composition. Yeats introduces the prayer thus: '[…] when I pray against the demons I repeat a prayer, which was made I know not how many centuries ago to help some poor Gaelic man or woman who had suffered with a suffering like mine.' Although Yeats’ prose text makes no explicit reference to the visit of the Magi to the stable at Bethlehem, it does relate a dream in which three old men 'in armour studded with rubies', 'under the roof of a manger', 'bowed very low in front of the woman and the child'. Stephens follows his setting of the prayer, with Yeats’ poem The Magi (1914). This echoes some of the imagery found in his earlier prose text and refers more explicitly to Christ’s second coming, Calvary’s turbulence and 'the uncontrollable mystery / On the bestial floor'. For the Paidir, Timothy Stephens captures the style of an old traditional Irish melody and writes for upper voices in unison supported by a solo violin. This leads directly into his beautiful choral setting of Yeats’ poem, underpinned by strings and pianoforte with occasional reminiscent flourishes on the solo violin.

Suantraí
Although its lyrics make no direct reference to the Nativity scene, this traditional Scottish lullaby is perfectly suited to the events of Christmas night. For his arrangement of the rocking traditional Scottish tune, the Wexford choral composer, Fionntán O Cearbhaill, set the Irish translation by Seán Óg Ó Tuama of the original Scots-Gaelic text. Introduced and supported by the chamber choir, a solo soprano sings the tune. On its repetition, this time by the choir, it is beautifully adorned by a soaring descant sung by the soloist before the lullaby subsides in an appropriately hushed coda.

Wexford Carol
Also known as the Enniscorthy Carol, referring to the provincial Wexford town where it was collected by W H Grattan Flood (d1928), this native Irish piece dates back to the twelfth century. Its short verses focus on the scenes surrounding the birth of the Messiah heralded by the prophets as a gift from God 'to end all strife'.

The traditional Irish melody shines forth in this atmospheric setting scored for solo tenor, choir, strings and continuo. Its beguiling beauty is simply expressed throughout by the solo tenor but with the evocation of the apparition of the angel to the shepherds, the choir weaves its lines in a free rendition.

O magnum mysterium
Perhaps the earliest musical setting of this brief Latin text was heard as the Gregorian chant that forms the fourth responsory in the Office preceding the Mass for Christmas Day. It focuses on the awesome mystery of the birth of the Saviour to the Virgin Mary in a stable surrounded by animals. The Slovenian composer Andrej Makor set this text in 2014 for mixed choir. The music wonderfully sustains the sense of awe and mystery throughout, culminating in a series of Alleluias before subsiding into a final recall of the 'magnum mysterium' with which it began.

Christe redemptor omnium
This work by its Swiss composer was commissioned by the Choral Scholars and first performed in 2018. An ancient plainsong version of the hymn beginning 'Jesu redemptor omnium', is part of the church’s official liturgical music for Christmas Vespers. Antognini’s text is often substantially different and his original thematic material merely evokes the distinctive character of plainsong. The hymn is set for tenor solo, six-part choir, solo violin and violoncello. The alternation of the melodic lines between the soloist and the choir’s soprano serves to articulate clearly each of the seven verses and the music of the final verse recalls that of the opening, masterfully rescored to provide a tutti conclusion.

Cró na Nollag
With this Irish carol, composed in 2007 we are brought once more into the stable in Bethlehem to welcome the sleeping infant, the King of Kings. A solo soprano sings a gentle, peaceful rocking melody supported throughout by the choir’s sustained, hushed chords.

Carol of the bells
The origins of this popular carol lie in an old Ukrainian folk chant. Since it was set in 1919 by Mykola Leontovych, the tune has been heard in over 150 arrangements worldwide. Desmond Earley’s setting for choir and orchestra highlights its repeated four-note figure in the vibraphone’s introductory measures. This distinctive rhythmic pattern is maintained throughout the piece in order to depict Christmas bells as 'On, on they sound […] their joyful tone to every home' and 'Tell all the world Jesus is King'.

Have yourself a merry little Christmas
This song, composed by Hugh Martin and Ralph Blaine was first heard in the 1944 musical Meet me in St Louis sung by Judy Garland. In Desmond Earley’s warm arrangement, a baritone solo carries the melody richly supported by the choir.

We toast the days
The music and text of this gentle secular carol setting by the Minnesota composer and arranger was written in 2016 to toast the arrival of the New Year 'when the clock strikes twelve and another year is gone'. Its three verses are sung unaccompanied by the male voices of the choir to a traditional Celtic melody introduced by a solo tenor while the refrain, introduced with distinctive alternating duple and triple rhythm, begins by toasting 'the days both good and bad while the night is long and the bitter cold is come'.

Auld lang syne
For decades, on these islands, the passage from the old to the new year at midnight has been celebrated by singing Robert Burns’ poem. This was first printed in 1788 although the author himself acknowledged that its origins lie in an earlier Scots-language ballad printed in 1711 by James Wilson. In this graceful arrangement, we hear the standard English version of the text set to a traditional Scottish melody. Sopranos and altos predominate in the four verses, sometimes in unison and, at times, underpinned by a Scottish-sounding drone. In contrast, the chorus is richly sung by the full complement of voices.

As we stand on the edge of another bright new year I take your hand in mine With assurance of the courage we will find and the hope that leads us on.
(Linda Kachelmeier)

The post-production phase of this recording project took place as the world grappled with the outbreak of COVID-19. American composer Linda Kachelmeier’s piece—We toast the days—serves as a reminder of the strength, love and hope that resonates throughout the world not simply at Christmastide but also during periods of hardship.

Christmas is a time to connect with family, friends and loved ones to enjoy the magic of the holiday season: this we can all do through the shared gift of music. Be all merry is one of three new pieces especially composed for the Choral Scholars. This lively carol for choir, orchestra and violin by Irish composer Eoghan Desmond evokes the joyful play of Christmas in the lines ‘Be all merry in this house/Exultet celum laudibus!’. The album contains a remarkable setting of the Advent plainsong hymn Christe redemptor omnium for tenor solo, chorus, violin and violoncello by Ivo Antognini, crafted for Choral Scholars with the kind support of the Swiss Embassy in Dublin. The Adoration of the Magi by American composer Timothy Stephens is a breathtaking setting of W B Yeats’ poetry.

A beautiful Irish-language lullaby—Cró na Nollag—set by father and son, Adhamhnán and Uinseann Mac Domhnaill, and the much-loved Scottish tune simply titled Suantraí, are also included in our selection for you. We join forces with the Irish Chamber Orchestra for a number of tracks including the Wexford Carol and Carol of the bells. The choir closes the album with the song most associated with friendship, hope and the promise of a new year, Auld lang syne.

May the beauty of this music—our Christmas gift to you—stay with you throughout the season and bring you joy for years to come.