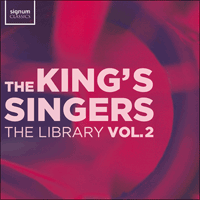 The King's Singers – The Library, Vol. 2

Eight more numbers from the masters of all things close-harmony, once again including brand new recordings of old favourites as well as glittering arrangements not previously committed to disc.

This is the second volume in our EP series ‘The Library’. The idea behind this series is to explore both the history, and the new horizons, of our close-harmony repertoire. Close-harmony is arguably the part of our work for which we are best known, and our library of thousands of arrangements is one we’re determined always to explore, maintain and develop. The track listing is designed to celebrate some old favourites from the library alongside brand new arrangements and adaptations, created especially for these recordings, which may perhaps become ‘old favourites’ of the future. Volume 2 was recorded in the beautiful surroundings of Snape Maltings, Suffolk (UK)—a place most famous for its association with Benjamin Britten—and it proved to be a relaxing and inspiring place to work for two beautiful wintry days.

Get happy was written by the American songwriter Harold Arlen (1905-1986) in 1930, in collaboration with the lyricist Ted Koehler. It is in the tradition of Christian evangelical meeting songs. Our arrangement, by Paul Hart, has been in the library for many years and was first recorded in a version with George Shearing playing piano, on the album Get happy from 1991. Robert Rice took this arrangement by Paul Hart with instruments and adapted and extended it to work a cappella, and it has since sat proudly in our bank of songs by the great Harold Arlen.

Of the brand new songs on this release, Meet you in the maze is perhaps the most unusual inclusion for us. The decision to cover a song by James Blake (b1988) was inspired partly by seeing the British singer/producer perform at the Grammy Awards in 2019. This is the final track on his 2016 album ‘The Colour in Anything’, and its simplicity struck us. Much of James Blake’s music comprises layers of complex electronic sampling and drum loops; but in this track, he simply layers his own voice into 6 parts (making it an ideal song for us to cover). Each of us took one of his vocal lines and we were able to recreate the song live, with its moody, dark textures and reflective silences.

For some people, The King’s Singers are inextricably linked to the music of The Beatles. In our concerts, iconic songs by that ‘other British boyband’ go down a treat with audiences all over the world. This is partially thanks to the 1986 King’s Singers album ‘The Beatles Connection’, which featured 19 arrangements of their songs, the opening track of which is Bob Chilcott’s (b1955) arrangement of Penny Lane. This is Lennon and McCartney’s great hit from 1967, which tells about the weird goings-on in that Liverpool street, and which features an eccentric but thrilling key-change between verse and chorus.

From many thousand miles away, but equally full of nostalgia, is Takeda lullaby—a Japanese folksong which Julian has known since his childhood, and which we have enjoyed performing on recent tours of Japan. The song originally comes from the city of Kyoto, and is a lament for home, sung by a woman who has been forced to travel to the other side of the mountains to work for a rich family. This arrangement was written by our former tenor in The King’s Singers, Grayston (Bill) Ives (b1948) as part of a larger set of folksong arrangements.

Slow train is a nostalgic song, written by the British musical comedy duo Flanders and Swann, who were much-loved figures in the entertainment world of the 1950s and 60s. It was written in response to a 1963 report by the chairman of British Railways, Dr Richard Beeching, who made vast cuts to Britain’s railways. The song laments the closure of thousands of small stations and lines, which were deemed unprofitable in the age of cars, but which had connected rural communities for decades. The song captured a general spirit of national disappointment at the closures. It was arranged for The King’s Singers in their early years by Gordon Langford (1930-2017), who added a charming handwritten note at the end of the score which reads: ‘Effigies of Dr Beeching (complete with box of pins) available upon request’.

When we were selecting material for this recording in 2019, the Freddie Mercury biopic ‘Bohemian Rhapsody’ was talk of the town. With all six of us having seen it on various plane journeys and been inspired, we decided to include a song by Freddie Mercury, and Nick volunteered to adapt for us Good old-fashioned lover boy from the 1976 Queen album ‘A Day At The Races’. Lacking, as we do, electric guitars and drums, he employed the full extent of our instrumental forces: 6 kazoos and a dusty old tin whistle.

Sir James MacMillan (b1959) is one of the UK’s greatest living composers; he lives and works in Scotland and his music is strongly influenced by the sounds of Scottish folksong and often inspired by the beautiful landscapes of his homeland. He wrote Scots song for us in 2019, for the wedding of our countertenor Patrick and his wife Ellie, by adapting an existing version for piano and voice which he wrote in 1991. The words are in the Scots language, by William Soutar (1898-1946), a Perthshire poet of the early 20th century. MacMillan’s melody for Scots song is something of a musical ‘signature’ and is used in several other choral and orchestral works.

The year 2020 marks 70 years since the release of the original Walt Disney film ‘Cinderella’, and 5 years since the release of its newest version, starring Lily James. One of the enduring songs from these films is A dream is a wish your heart makes, which is sung by Cinderella to encourage her animal friends always to dream of a better life. The melody is taken from Franz Liszt’s Etude No 9, 'Ricordanza', but the sparkling, colourful harmony of the Disney song—alongside its optimistic lyrics—made it an attractive prospect to adapt for our forces and record.

For the lyrics and translations of each piece please visit kingssingers.com/the-library