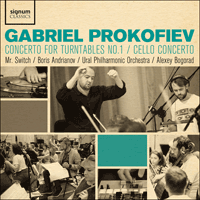 Concerto for turntables No 1 & Cello Concerto

Boris Andrianov performs Gabriel Prokofiev's Cello Concerto, a work drawing its inspiration from the Stalin-era deprivations faced by so many in the 1940s and 1950s, the composer's family among them. Concerto for turntables No 1 (two concepts there to ruffle Tunbridge Wellsian feathers …) is rather less conventional.

Concerto for turntables No 1
Sometimes composers write a piece that takes on a life of its own, and that’s what has happened to this concerto. Much credit is due to the phenomenal skills of Mr Switch who has become the unofficial lead soloist of this work. His performance with the National Youth Orchestra conducted by Vladimir Jurowski at the BBC Proms in 2011 was the turning point for the concerto; the video had soon reached audiences and orchestras all over the world, and since then there have been over 55 performances of the concerto worldwide, and 20 performances of the 5th movement as part of the BBC’s Ten Pieces project.

Here’s my original programme note from 2006, explaining how it all began:
Back in 2005, pianist and events producer, Will Dutta excitedly approached me with the idea of composing a ‘concerto’ for ‘DJ’. My immediate reaction was negative. Although I had just composed a classical piece which incorporated a DJ (Three Dances for Bass Clarinet, String Trio & DJ, 2004), the idea of an actual ‘DJ concerto’ sounded too gimmicky to me: I was concerned it would seem like another PR exercise to get classical music ‘down with the kids’, but Mr Dutta insisted that there was serious potential to the project and as it was inevitable that a concerto for turntables would emerge sooner or later; why not let us be the team to do it right. Will explained that we would have top turntablist, DJ Yoda, as the soloist, and once I properly considered the musical possibilities I soon started sketching out different concepts for each of the movements, and then I was hooked.

What makes the turntable different to any other instrument is that it uses pre-recorded sounds; this is actually nothing new in classical music. From the Musique concrète of Pierre Schaeffer’s studios, Poème électronique of Varèse in the 1950s, and John Cage’s Imaginary Landscape No 1 (from 1939, the first composition with turntables), through to the current digital world of electroacoustic music, classical composers were manipulating recorded sounds long before Grandmaster Flash made his first scratch using a record. However, once hip-hop culture discovered that a DJ can do so much more than just ‘play records’ with a turntable, their DIY approach led to the evolution of a very exciting new instrument.

That instrument has somehow stayed within the world of hip-hop and dance, never venturing into the classical world, despite the incredible expressive potential it has. Having previously composed and studied electroacoustic music, I am aware of the search for more expressive ways of performing electronic compositions, as unfortunately many concerts just consist of the playback of digital files. So could it be possible that this instrument, that first came to life at block parties in the Bronx, could bring that expressivity?

But, seeing as it was developed for hip-hop music, would it work in the context of a classical form such as a concerto? Hip-hop music has frequently sampled orchestral sounds and textures with great success, so why not the other way round? Plus, an experienced DJ can produce such a wide range of sounds that it must be possible for them to sit within the orchestra in some way. Furthermore, as a composer I have a genuine interest and experience in contemporary urban music styles such as hip-hop, so I knew that I could incorporate certain rhythms and musical ideas into the work that brought the worlds of the DJ and the orchestra closer together. (In this concerto you can hear traces of hip-hop drum patterns, a reggaeton beat, grime, and house.)

The central inspiration guiding the composition of this work was the instrument itself, the turntable. After a meeting with DJ Yoda, where he demonstrated the range of techniques on offer, I decided that the concerto would aim to explore all the main DJing techniques, with each movement focusing on a certain technique. The concerto explores:

1. The most basic DJ technique of all: playing a phrase of music, and the progressions from that; stopping the record, interrupting it, reversing it, slowing it down, and cutting it up.

2. The earliest DJ technique: ‘mixing’. One of the most interesting mixing techniques is beat juggling. It is when a DJ ‘juggles’ with two identical records to create loops or putting them out of sync with each other, to create interesting new rhythms. In the concerto this is done with two records in the cadenzas, and with just one record against an orchestra.

3. Scratching: the most famous DJ technique and in the right hands it can be extremely expressive and musical. The concerto features a wide range of scratch techniques: scribbling, planing, hydroplaning, the transformer, echoes, the crab and the baby.

4. Playing a melody with the turntable. Perhaps surprisingly, melodic playing is possible, as the Technics 1200 (the Steinway of turntables) has a slider and button for altering the playback speed (and therefore pitch) of a record. There is a DJ from San Francisco who often plays nursery rhymes using a test-tone in his DJ-sets. There are 6 notes that can quite easily be played on the turntable (3 positions of the pitch control, in 33 or 45 rpm), and it turns out these pitches make up the first 6 notes of a minor scale. But some of the notes are very tricky to play one after another, so the turntable is not very flexible as a melody instrument.

The final and most defining choice for the piece was the subject of what sounds the DJ should use. Through the evolution of turntablism there are certain classic samples that have become the main tools of most scratch-DJs, such as a gasping “ahhhh” sampled from Change The Beat by Fab Freddy Five, and funk breaks and drum hits that are good for scratching. However, if we put these classic ‘DJ sounds’ over a live orchestra I had a feeling that the concerto would sound forced and not the organic composition I was striving for. What seemed the most natural solution was that the DJ should scratch and play with sounds that were generated by the orchestra themselves, so that no foreign sounds would ever enter the piece. For the necessary gasping sounds I could record the woodwind players and for the drum sounds record the orchestral percussion section playing passages from the concerto itself. Instead of the test-tone we would sample a flute note for the melodic section.

Apart from the composing of the score, the final challenge was how to notate the DJ part. I found that simplicity was the key, as DJs are not used to following scores. So I made a simple score that marks all the entries, the main rhythms and the sounds to use, but much of the details and ornamentation is open for improvisation, and is discussed in rehearsals. This characteristic gives a nod to the early days of the concerto when soloists were given more freedom to improvise. So in one way, this new instrument is bringing the concerto form back to its roots.

Commissioned by Will Dutta, Chimera Productions in 2006. Version for expanded orchestra was commissioned by the National Youth Orchestra of Great Britain in 2011.

The first performance of the symphonic orchestra version was given on 3 August 2011 in Symphony Hall, Birmingham by the National Youth Orchestra of Great Britain featuring DJ Switch (turntables), conducted by Vladimir Jurowski. The first performance of the original version was given on 26 September 2007 at The Scala, King’s Cross, London, by The Heritage Orchestra featuring DJ Yoda (turntables), conducted by Jules Buckley.

Cello Concerto
Back in 2012, the Cello Concerto was the third concerto that I had composed, and was perhaps my most traditional, considering that the two previous concertos had the unconventional soloists of turntables and bass drum. However, I continued my interest in taking influences from electronic and contemporary dance music styles, as well as from classical and modern classical forms; so that this concerto explores both the more traditional and lyrical aspects of the cello as well as syncopated, percussive and minimal approaches.

Three years earlier I had composed Cello Multitracks, a suite for cello nonet, which gave me the chance to explore and enjoy the huge variety of sounds that this instrument can create, and reaffirmed my belief that the cello is one of the most versatile classical instruments. I was impatient to compose a concerto for cello, so when Sasha Ivashkin approached me with the chance to compose a concerto for him and the St Petersburg Philharmonia I was already full of ideas.

Because the premiere of this concerto was in St Petersburg, and in the very concert hall where so many inspirational Russian compositions had been premiered (including works by my grandfather), I instinctively started to write music that connected to my Russian heritage, albeit with a contemporary twist. My father grew up in Russia, but I was born in London and this premiere was my Russian orchestral debut. So I allowed those aspects that connect to my Russian side to sing out louder in this work. This is particularly the case in the second movement which I subtitled ‘in memoriam’, as it is inspired by the memory of my father, uncle, grandmother and grandfather, and it remembers in particular the difficult times they faced in the 1940s and 1950s in Russia. My grandmother was sent to a gulag for eight years, and there is a striking photo of my young father (taken by my uncle) looking at their ransacked apartment just after she was taken by the KGB. Experiences like theirs were shared by many during the Stalinist era.

The first movement is lighter, a Scherzo, with some humour, sarcasm, but also a tougher edge at times. It ends with a surprise end section created from a one and half beat loop of the main theme which changes the mood into a light, almost pastoral, setting.

As already explained, the second movement is more introspective and it connects with lyrical styles of the mid-20th century. There are some glimmers of hope and peace, but there is a feeling of despair that will not go away. The middle section (marked ‘scuro’ in the score) has a darkness that cannot be escaped, and the ending repeats the heavy closing phrase inexorably; a dark impending force that feels like it may never end.

The final movement opens with a humorous, quasi-classical introduction (marked ‘curioso’ in the score) but then launches into head-nodding hip-hop stabs set in triple time which are occasionally looped, stuttered mechanically and then slowed right down as if manipulated by a DJ. This movement originally had working title of ‘Bang Waltz’, referring to the bastardisation of the old classical form it hints at. However, the ornamental cello theme has a more classical shape, but without strictly adhering to classical harmony, and it really tests the technique of the soloist.

Very sadly the cellist Alexander Ivashkin, who commissioned this work, died suddenly of cancer less that 8 months after the premiere of this concerto (on 31st Jan 2014), and I would like to dedicate this recording to his memory.

Commissioned by Alexander Ivashkin with kind support from the Ralph Vaughan Williams Trust.