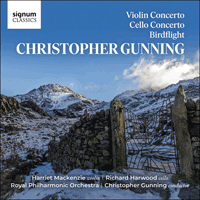 Christopher Gunning's ability to conjure atmosphere is second to none. Two of the works here, the Violin Concerto and Birdflight, are ostensibly responses to the vitality of the natural world, but both—in common with the Cello Concerto—remain tinged with the composer's inimitable melancholy.

Although I have often thought of writing a Violin Concerto, it was 2011 when I first felt the time was right. Then in 2012 I climbed the beautiful Sugarloaf Mountain near Abergavenny, full of ideas for the piece; it would be predominantly lyrical and melodic but also quite florid, with the violin ducking and weaving, rather like the insects and birds of the Welsh hills and valleys. However while I wanted to express my feelings of joy at being in this incredible place there would also be room for sadness and melancholy, emotions never far from the surface of my music. So it was that the concerto now grew and grew, and before long it became apparent that this was to be a major opus.

The first movement is about peace but also exhilaration; the violin part is expressive and there is much interplay between soloist and orchestra. The music returns frequently to a chord derived from the opening phrase, a series of rising thirds; this chord, almost static, brings to mind the ancient and immovable mountains of Wales The second, slow, movement is quiet and nocturnal; you may imagine a town or village where moonlight catches wisps of smoke rising from chimneys and behind their curtains restless people toss and turn.

The third movement is full of life, and would be a moto perpetuo were it not for some more romantic music in the middle. Towards the very end the opening theme from the first movement is recalled, albeit in a far more spirited mode. The concerto is dedicated to Catherine Handley, superb musician, great friend, and lover of all things Welsh.

The Cello Concerto is quite different. Although composed hard on the heels of the Violin Concerto, it is generally darker though equally expressive.

The first movement, subtitled 'Waltz memories', was inspired by a visit to a care home. The residents sat in a semicircle around the room, mostly half asleep. Then some musicians arrived and after a while the residents sprang to life and danced, just like they had done 40 years ago. It was astonishing to witness the power of music!

The second movement, 'Racing', is fast and energetic; whether it’s the same residents of the care home remembering how they raced their bicycles through the mountains or if it’s some other kind of race, I will leave to you.

The third movement 'Lament with variations' begins with a slow lament, and if the variations are much faster and brighter in character, the lament is never far away. In fact it recurs after the cadenza and after some more variations, it finishes the movement.

The third piece, Birdflight, is for the orchestra alone; a kind of tone poem. At the opening and close we have some quiet night music with spacious strings. Our birds take flight but encounter a problem; a hawk is on their tail. Our birds manage to hide and there is a pause. Then, when danger has passed, they take off and once again enjoy the sheer pleasure of flying.

The music was all recorded over two days and as is always the case, the fabulous players of the Royal Philharmonic acquitted themselves brilliantly. Richard Harwood tackled the Cello Concerto with characteristic dedication, and Harriet Mackenzie brought my Violin Concerto to life in a way I could only have dreamed of.

Thanks also to Mike Hatch, our brilliant recording engineer, Robin Hawkins for superb editing, and George Collins and Claire Baughan for helping magnificently during the recording sessions.