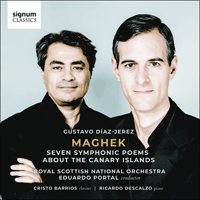 Gustavo Díaz-Jerez is one of the leading composers and pianists in Spain. Here he deploys his unique brand of naturalistic tonal painting over the course of seven extended symphonic poems to evoke the very being of the Canary Islands: tapestries of 'emergent' harmony—albeit harmony not always immediately apparent—of which Caliban would doubtless have approved.

The compositional language of this cycle, and of my music in general, rests on three main pillars. The first is the spectralist movement, where timbre and timbre-harmony duality are essential elements. The second is the use of mathematical and computational processes as generators of musical material. This material is later modeled in a much more practical and intuitive way, without losing the essence of the underlying processes. Finally, the scientific-philosophical concept of 'emergence'. Emergence is a characteristic of complex systems where the whole is richer than the mere sum of its constituent parts. Most natural processes and, in particular, the genesis of life, are emergent processes. In this sense, the intelligent combination of apparently simple musical elements generates a whole of greater richness and complexity than the sum of those elements.

With this cycle I wanted to create a set of works with musical coherence and a sense of aesthetic unity, but at the same time give a unique personality to each one.

Ymarxa, a Guanche word meaning 'brilliant', 'new', is also a place in Tenerife in what is now Monte de la Esperanza. Once covered by the dense laurel forest, there was a lagoon in this location that served as a place of worship for the Guanches. The idea of light, with its innumerable modulations, constitutes the central element of inspiration of Ymarxa. This is achieved musically through the use of carefully crafted orchestral textures. Ymarxa, too, obtains its musical material ‘mining’ the computational universe. It is both contemplative and dynamic, creating its musical discourse from the interaction of these opposing elements. The concept of emergence is also an essential idea in the compositional process of Ymarxa, as is in the rest of the pieces of the cycle. Ymarxa was commissioned by the XXVII Festival de Música de Canarias and received its premiere performance by the Royal Philharmonic Orchestra under the baton of maestro Charles Dutoit.

Ayssuragan—'the place where they froze' in the extinct language of the Guanches—refers to a location where, in the last moments of the European conquest of the island of La Palma, the non-combatant population took refuge and died. Written for my friend Cristo Barrios, it is a clarinet concerto conceived as a symphonic poem, in which the orchestral part is as important as the solo part. The work begins with a clarinet cadenza of desolate character, subtly accompanied by the percussion section. This cadenza introduces much of the thematic material that will be used throughout the work. The rest of the orchestra gradually becomes more and more present, culminating in a climax that gives way to a faster, more vigorous section. This passage is developmental in character and concludes in a very powerful tutti. A second, longer cadenza for the clarinet follows, occasionally interrupted by orchestral interludes, leading to a cold and desolate passage accompanied by string harmonics and solos in the woodwinds. A modified reprise of the rhythmical section previously introduced is heard again, concluding in an energetic climax that dissolves gradually and ascends to the extreme high register, ending with the painful chant of the clarinet.

Guanapay, a location in the municipality of Teguise in Lanzarote, is an ancient extinct volcanic cone. The word Guanapay is undoubtedly of Guanche origin, although nothing is really known about its possible meaning. This location also houses the Santa Bárbara Castle (also known as Guanapay Castle), which dates back to the 16th century and is the oldest in the Canary Islands archipelago. The volcanic element is a fundamental idea in the musical construction of Guanapay. This is achieved through the use of elaborated orchestral textures, often employing extended playing techniques. Guanapay was written for my friend Ricardo Descalzo, champion of the contemporary piano repertoire in Spain. Although Guanapay is a fully fledged piano concerto, the orchestral part is of utmost importance, not just a mere accompaniment. We must think of Guanapay in terms of a duo, in which the soloist and orchestra sometimes oppose, and sometimes complement each other. The timbral complexity of the orchestra is paralleled by the piano through to the use of inside-the-piano extended techniques and electronics. As in the other works of the cycle, the original material is of mathematical-algorithmic origin but has been subsequently ‘filtered’ in order to adapt it to the possibilities of the instruments. Volcanism as well as evocations of natural sounds are depicted through precise use of orchestral combinations. Despite the complexity involved in the compositional process, Guanapay has been written from the perspective of the performer, as I am mindful that the survival of a work of these characteristics depends on this balance.

Chigaday is a Guanche word referring to a rocky formation on the island of La Gomera. The writer and historian Benito Pérez Armas states in his work La baja del secreto that: 'On a Sunday in January 1488, the last islanders who resisted on the cliffs of Chigaday decided to kill themselves before surrendering to the enemy soldiers.' However, this event is not the only motivation for this work, but also the beautiful natural landscapes that this island possesses: its intricate laurel forests; the extraordinary rocky formation of Los Órganos; its wild marine landscapes to name but a few. Numerous sonorities in Chigaday are constructed from natural harmonics (especially the 5th, 7th, and 11th prime harmonics, significantly deviated from equal-tempered tuning). Their use is especially abundant in the strings and brass. The computational universe has served as a source of inspiration and as a starting point to generate melodic, rhythmic, textural, and formal material, which has subsequently been modified and developed throughout the work. The concept of 'emergence' is a fundamental part of the construction of Chigaday. Complexity arises, indeed 'emerges', from the entanglement and interaction of many small, apparently simpler parts, which together make up a whole of greater richness and significance. Chigaday was commissioned by the Foundation Autor-AEOS, and premiered by the Tenerife Symphony Orchestra under the baton of maestro Perry So.

Azaenegue, a place in the island of Gran Canaria known today as Montaña de Altavista, owes its name to its height and the spectacular view that is contemplated from it. Some sources argue that this mountain lost its original aboriginal name, Azaenegue, given by the Guanches. According to the philologist and historian Ignacio Reyes García, it comes from the words 'Assa-enneg', which means 'arrival of dawn'. Azaenegue begins precisely with this idea: a play of pointillist dialogue between the percussion section and the harp, enveloped by the sonority of string harmonics, which symbolizes the night. The mountain, colossal and rugged, is evoked by powerful orchestral tutti. A crescendo in the brass and woodwinds gives way to the sunrise, with its innumerable changes of light and color, realized musically through changes in orchestral timbre. This section is followed by a much faster and rhythmic one that gradually collapses to a single note. This is a musical evocation of the collapse of matter towards a singularity, as if it were a black hole. The opposite also occurs: from a single note, as if it were an embryo, the musical matter grows in complexity and branches out. Azaenegue ends with a musical recreation of one of the possible endings of the universe: the 'Big Rip'. This concept is realized musically through a continuous accelerando where the musical matter evaporates towards the extreme high register. As with the other pieces in the cycle, Azaenegue draws its musical raw material from the computational universe.

Erbane was the name given by the first settlers to the Canary Island of Fuerteventura, before its conquest in the 15th century. It literally means 'stone border', in clear allusion to the wall that crossed its two socio-territorial tribal demarcations. Erbane employs orchestral textures with frequent use of extended techniques to evoke the sound of the natural elements that characterize the island: the whispering of the wind, the sound of sea waves, the song of seabirds, etc. The orchestral textures evoke the smooth, broad landscape, which is characteristic of the island. Once again, the musical raw material is obtained from mathematical-algorithmic structures. These procedures subsequently involve an elaborate process of adaptation to the musical idea and the instrumental possibilities of each orchestral family.

Aranfaybo is a Guanche word associated with the island of El Hierro. It literally means 'the one that provokes rain'. Aranfaybo was a male divinity invoked by the Bimbaches (aborigines from El Hierro) when rain was scarce. It was the first work of the cycle to be composed under a commission by Alberto Roque, chief conductor of the Hungarian Chamber Symphony Orchestra. Much of the musical material in Aranfaybo is derived from an algorithmic process involving the digits of the square root of 2. Formally, Aranfaybo is framed in a quasi-symmetric structure. Most of the natural forms and, certainly, most of the living beings exhibit clearly recognizable symmetries, in particular the bilateral morphology. Aranfaybo uses this concept to generate its temporal structure. In this way, the listener rediscovers the work from another perspective, where the balance between anticipation and surprise is kept alive, making the work speak about itself.

This album represents the culmination of more than ten years of compositional work. A unique endeavour in the history of music in the Canary Islands, it comprises seven symphonic poems—almost two and a half hours of music—which evoke the landscapes and natural beauty of the Canaries. The cycle takes its name, Maghek ('the one who creates brightness'), from the sun-goddess of the Guanches, the aboriginal inhabitants of the Canary Islands. Each piece is inspired by a specific locale on a different island; some resurrect forgotten stories. Naturalistic tonal painting (the sea, the wind, the rugged scenery) is a constant feature throughout the cycle.

I wish to thank the BBVA Foundation, the Gobierno de Canarias, and the Cabildos of Tenerife and Gran Canaria for their generous support, without which this project could not have been made possible.
www.maghek.com