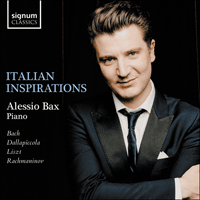 Alessio Bax performs a personal selection of piano works inspired by Italian composers through the centuries, from Bach's re-imagining of a Baroque oboe concerto, through works by Rachmaninov and Dallapiccola, and ending with two of Liszt's most creative responses to the country's mythology.

‘This Italian's salute to his home country is inspired indeed’ (Gramophone)

Marcello/Bach Oboe Concerto in D minor
The influence of JS Bach’s contemporaries on his compositional output is in ample evidence throughout his vast oeuvre. The composer’s son, Carl Philipp Emanuel, lists a number of these in his correspondence with Johann Nikolaus Forkel, Sebastian’s biographer, in 1775: Caldara, Fux, Handel, Hasse, Telemann, Zelenka, among many others.

Strangely missing from CPE Bach’s list are Antonio Vivaldi and both Marcellos, the brothers Alessandro and Benedetto: Italian masters in whose music Bach undoubtedly took keen interest. Yet Bach (the elder) himself made explicit his penchant for the music of these composers through his arrangements of their concerti for solo keyboard: a set of sixteen concertos (BWV 972-987) composed between 1713 and 1714 exclusively comprises arrangements of other composers’ work, including six by Vivaldi; one, in C minor, after Benedetto Marcello’s Violin Concerto in E minor, Op 1 No 2; and the Concerto in D minor after Alessandro Marcello’s Oboe Concerto (frequently misattributed to Benedetto).

While presumably drawn to the expressive character of his Italian counterparts’ music (one surmises that the Brandenburg Concerti, in their dramatic power and instrumental panache, owe a debt to L’estro armonico), Bach’s keyboard arrangements are more than mere homage. The consummate keyboard virtuoso, Bach demonstrates in these transcriptions great imagination and originality in writing for his instrument. From the Marcello Oboe Concerto’s Andante e spiccato first movement, Bach unlocks a kaleidoscopic variety of keyboard textures, from razor-sharp two-part counterpoint to the dense fusillade of seven- and eight-voice chords that precedes its final cadence. Marcello’s luxuriously mournful Adagio is transfigured into an introspective soliloquy; notably, where Marcello provides melodic scaffolding for the oboist’s ornamentation, Bach notates his trills, turns, and flourishes, offering a lens into his art as a keyboard player. The Concerto’s Presto finale blazes with the Italianate fire that so entranced Bach: an element exquisitely translated in his Bach’s version.

Rachmaninov Variations on a theme of Corelli Op 42
In the years following his death, with manifold strains of modernism animating an increasingly contentious musical landscape, the unabashed Romanticism of Rachmaninov’s compositional language did his legacy no favors. Writing in the 1954 edition of Grove’s Dictionary of Music and Musicians, Eric Blom infamously asserted that Rachmaninov, belying the celebrity he achieved in his lifetime as composer, pianist, and conductor, 'did not have the individuality of Taneyev or Medtner'. Blom went on to predict: 'The enormous popular success some few of Rakhmaninov’s works had in his lifetime is not likely to last, and musicians never regarded it with much favour.'

Hindsight half a century hence has reinforced the music critic Harold C Schonberg’s acute dismissal of Blom’s assessment as 'one of the most outrageously snobbish and even stupid statements in a work that is supposed to be an objective reference'. (Schonberg did acknowledge that Blom was only articulating the day’s prevailing critical thought.) The early twenty-first century finds Rachmaninov’s image rehabilitated, and, indeed, his artistic legacy more compelling than ever before. While the pop-star sheen of his performing career has long since faded, Rachmaninov endures as one of the repertoire’s most cherished, and most performed, composers. His catalogue of solo works for his own instrument rests at the center of that legacy, and likewise occupies a place of distinction in the piano literature, representing a benchmark of pianistic technique and virtuosity.

In his Variations on a theme of Corelli, Op 42—which would be his final work for solo piano, despite being completed in 1931, twelve years before the composer’s death—Rachmaninov seems indeed to eschew the early twentieth century’s modernist impulses, drawing from historical material. The variations are not actually based on an original Corelli theme, but on La folia, a traditional tune adopted by Corelli in his Sonata, Op 5 No 12, as well as by numerous other composers throughout history (including Vivaldi; Brahms, in his Sextet in B flat Major, Op 18; et al.).

Yet Rachmaninov’s variations nevertheless are distinctly of their time. While reflecting his essentially neo-Romantic language, their textural clarity, piquant rhythmic character, and chromatic harmonies are strikingly modern. (In these respects, and also in their unforgiving virtuosic demands, the variations prefigure the famous Rhapsody on a theme of Paganini, Op 43, for piano and orchestra, composed three years later.)

Crystalline textures reflect Rachmaninov’s incisive understanding of his instrument, whether in the dreamlike haze of the Andante fourth variation and the Adagio misterioso eighth variation; in quick marcato, staccato passagework, as in Variations 5, 6, and 12; or in the lithe Mendelssohnian runs of Variation 10 Allegro scherzando.

Indeed, it is primarily via textural, rather than harmonic, contrast that Rachmaninov achieves variety of character throughout. The music remains in stern D minor almost exclusively. One of the work’s most remarkable moments comes with the cadenza-like Intermezzo between Variations 13 and 14—after which a gentle chorale, piano, cantabile (Variation 14) and a dolcissimo lullaby (Variation 15) appear in D flat major. Following the unrelenting D- minor severity of the previous thirteen variations, these feel like a warm embrace.

Variation 16 (Allegro vivace) marks a jarring reentry into D minor, and the work remains in that wintry key through the increasingly adrenalized subsequent variations culminating in the twentieth variation’s thunderous cannon fire. The set ends with an introspective Andante coda, colored by evocative harmonies en route to a haunting, pianissimo conclusion.

Dallapiccola Quaderno musicale di Annalibera
More than two centuries after Johann Sebastian Bach based his 16 Concertos, BWV 972-987, on his Italian contemporaries Vivaldi, Torelli, and Alessandro and Benedetto Marcello, a leading voice in Italian music would return the salute. In 1952, Luigi Dallapiccola, Italy’s leading proponent of twelve-note serialism, composed Quaderno musicale di Annalibera (Annalibera’s musical notebook), a collection of eleven miniatures for solo piano, dedicated to his daughter Annalibera on her eighth birthday. While its title page immediately evokes the Notenbüchlein für Anna Magdalena Bach, the Baroque master’s gift to his second wife, the music of Quaderno musicale does not immediately evoke the composer’s familial affection. Here is music representative of Dallapiccola’s most uncompromising dodecaphonic technique. Likewise does it pay explicit homage to Bach: the first movement, 'Simbolo' ('Symbol'), begins with a statement of Bach’s musical cipher—the notes B-A-C-H (the German notational spelling for B flat-A-C-B natural)—over an oscillating staccatissimo bass line. That motif recurs throughout the haunting movement.

Upon cursory listening, the Quaderno musicale di Annalibera appears severe in character, yet time spent within its pages reveals lyricism and tenderness beneath its macho veneer. Moreover, as with Bach’s music, the Quaderno musicale makes a virtue of marrying technical rigor with expressive depth. In this, Dallapiccola has fashioned a work as reverent of his artistic ancestry as it is affectionate towards his own progeny.

Liszt Après une lecture du Dante 'Fantasia quasi Sonata' S161 No 7
Few composer-virtuosi have influenced the literature for their instrument as consequentially as Franz Liszt. For while, certainly, the sonatas and concerti of Mozart and Beethoven endure as the foundation of the Western piano literature, the startling originality demonstrated in Liszt’s extensive oeuvre of piano music utterly transformed composers’ approach to the instrument for subsequent generations. Liszt’s music for solo piano not only redefined the standard of keyboard virtuosity; it equally demonstrates a bold compositional imagination, serving as a laboratory for Liszt’s radical new methods of thematic development and experiments with harmony and form—innovations that made Liszt the most influential composer of the New German School, the progressive vanguard of Western music in the latter half of the nineteenth century that included Wagner and Berlioz.

It was Liszt’s and the New German School’s conviction that 'new wine demands new bottles'—that the traditional forms of sonata, string quartet, and symphony were no longer sufficient to contain the sweep of their musical vision. In place of symphonies, Liszt created 'symphonic poems': single-movement orchestral works based on narrative programs (eg, Tasso, Hamlet, Orpheus, Prometheus—heroic figures with whom, nota bene, Liszt surely identified). His piano music, likewise, responded to extramusical prompts. Between 1838 and 1861, Liszt created a cycle of seven works that would constitute the second volume of his Années de pèlerinage (Years of pilgrimage). These were inspired by artworks of Michelangelo and Raphael, the sonnets of Petrarch, and, in the case of the volume’s final work, Aprés une lecture du Dante: Fantasia quasi Sonata, Dante’s Divine Comedy. Liszt completed the 'Dante' sonata (as it is commonly known) in 1849, taking its formal title from a poem by Victor Hugo. It is essentially a single-movement piano sonata, comprising two main subjects: first, a slithering chromatic theme in D minor, a key rich with infernal associations (cf. Mozart’s Don Giovanni and Requiem, Schubert’s Der Tod und das Mädchen, Liszt’s own Totentanz, et al.), and built on a descending tritone, the dreaded diabolus in musica. Here, in no uncertain terms, is Liszt’s depiction of damnation. The proceedings feature devilish virtuosity indeed. The counterbalance of Paradise comes in the form of the second theme, a chorale in F sharp major—according to biographer Alan Walker, Liszt’s 'beatific' key, shared with his Bénédiction de Dieu dans la solitude and Les jeux d’eaux à la Villa d’Este.

Liszt St François d'Assise – La prédication aux oiseaux S175 No 1
The seraphic serenity of the 'Dante' sonata’s Paradise theme surfaces again in the first of Liszt’s Deux légendes, composed in 1863. St François d’Assise: Le prédication aux oiseaux is based on the story of St Francis of Assisi (subsequently recognized as the patron saint of animals) delivering a sermon to a mass of birds, who remained in rapt attention. Liszt was moved to create a work on this tale after witnessing thousands of sparrows ascend over a hill in the Italian countryside. His music captures the scene’s tranquil air, belying the considerable technical prowess required: the faithful twittering of Francis’s audience of birds requires constant changes between right and left hand to facilitate the trills in the piano’s upper register. A benevolent recitative, the voice of Francis, punctuates the birds’ cacophonous rapture.

As a pianist, one has to be very creative when thinking of an Italian program. There is almost a total dearth of Romantic piano music from Italy, most likely because of the prominence of opera during that period.

However, Italy has always had great music and has always inspired people. I open my program with a transcription—by none other than Johann Sebastian Bach—of an oboe concerto by the Venetian composer Alessandro Marcello, which not only showcases this wonderful music but also reveals deep insight into Bach’s mind. I follow it with Rachmaninov’s last solo piano piece, a set of amazing variations on Corelli’s La folia. This very simple theme (originally of Portuguese origins) becomes the vehicle for an incredible exploration of the piano’s dramatic potential. As Rachmaninov’s last solo work, it is perhaps his most eloquent, introspective and personal. The Dallapiccola is a beautifully crafted work. While strictly abiding to the rules of dodecaphonism, it manages to create a stunning sound world, made of subtle gestures, pauses, colors and highly expressive harmonies which draw in the listener. I complete my program with two works connected to Italy by the subject matter that inspired them: St François d’Assise: La prédication aux oiseaux is at once stunning and elusive, while—in only around 15 minutes—Après une lecture du Dante: Fantasia quasi Sonata takes both listener and pianist on a multi-legged journey through hell, purgatory and heaven, with so much beauty and drama along the way. It’s always a thrilling ride!