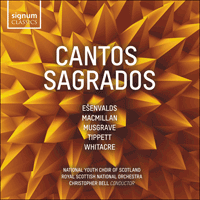 This is not the first recording of Sir James MacMillan's Cantos sagrados, but with thumping accompaniment from the RSNO and the serried ranks of the NYCoS it must be one of the most dramatic. The programme also contains a new a cappella cycle by Thea Musgrave and choral favourites from around the world.

Cantos sagrados (1989)
Notes by Sir James MacMillan
In writing this work I wanted to compose something which was both timeless and contemporary, both sacred and secular. The title ('Sacred songs') is therefore slightly misleading as the three poems are concerned with political repression in Latin America and are deliberately coupled with traditional religious texts to emphasise a deeper solidarity with the poor of that subcontinent.

It was my interest in liberation theology which made me combine the poems of the Mothers of the Plaza de Mayo in Argentina with the texts of the Latin mass in Busqueda (an earlier music theatre work) and has now led me to attempt a similar synthesis of ideas in Cantos sagrados.

The voices in Ariel Dorfman’s poems belong to those who suffer a particular type of political repression: the disappearance’ of political prisoners. Ana Maria Mendoza’s poem about the Virgin of Guadalupe tackles the same problem by asking a more fundamental cultural and historical question.

Leonardo dreams of his flying machine (2001)
Notes by Eric Whitacre
Charles Anthony Silvestri is not only a brilliant poet, teacher and historian, he is a consummate choral singer blessed with a beautiful tenor voice. When Dr Gene Brooks called and asked me to write the 2001 Raymond C Brock Commission, I could think of no other author whose words I would rather set.

We started with a simple concept: what would it sound like if Leonardo Da Vinci were dreaming? And more specifically, what kind of music would fill the mind of such a genius? The drama would tell the story of Leonardo being tormented by the calling of the air, tortured to such degree that his only recourse was to solve the riddle and figure out how to fly.

We approached the piece as if we were writing an opera brève. Charles (Tony to his friends) would supply me with draft after draft of revised ‘libretti’, and I in turn would show him the musical fragments I had written. Tony would then begin to mold the texts into beautiful phrases and gestures as if he were a Renaissance poet, and I constantly refined my music to match the ancient, elegant style of his words. I think in the end we achieved a fascinating balance, an exotic hybrid of old and new.

Leonardo dreams of his flying machine is the second in a planned cycle of element works (the first, Cloudburst, coincidentally, was completed nine years earlier to the day). It is dedicated with much love and respect to my publisher, the radiant and elegant Ms Gunilla Luboff.

When David heard (1999)
Notes by Eric Whitacre
Dr Ronald Staheli, more than any other conductor I have ever worked with, understands my music. He is that rare musician who discovers more music in the music than the composer even realized was there. So when I received the Barlow Commission to write a work for his amazing choir, I knew it had to be something special. The previous year Ron had recorded my Water Night, and his recording is, in my opinion, the quintessential performance of that piece. He seemed to find such powerful beauty in the rests, empty moments that became electric in his hands, so as I set out to write When David heard I decided that my first and most principal musical motive would be silence.

The text, one single, devastating sentence, is from the King James Bible; II Samuel, 18:33:

When David heard that Absalom was slain he went up into his chamber over the gate and wept, my son, my son, O Absalom my son, would God I had died for thee!

Setting this text was such a lonely experience, and even now just writing these words I am moved to tears. I wrote maybe 200 pages of sketches, trying to find the perfect balance between sound and silence, always simplifying, and by the time I finished a year later I was profoundly changed. Older, I think, and quieted a little. I still have a hard time listening to the recording.

When David heard was commissioned by the Barlow Endowment for the Arts for the Brigham Young Singers, and is dedicated with love and silence to Dr Ronald Staheli. It received its premiere on 26 March 1999.

On the Underground Set 2 'The strange and the exotic' (1994)
Notes by Thea Musgrave
There is one unexpected pleasure taking the London Underground (and, more recently, also the New York City subway): one’s eye may alight on a poem placed amongst the pervasive and numbing advertisements, and, for a moment, the imagination takes wing.

The poems selected for this work are all to be found in 100 Poems on the Underground. The first by Robert Herrick describes the dream world, the setting where the 'wondrous sights' of the anonymous 17th-century poem can be found. Fortunately the subway piranhas of Edwin Morgan’s contemporary poem exist only in the imagination. However this poem, commissioned for the inauguration of Glasgow’s refurbished underground, so alarmed the transport executive that it was never used!

Amazing grace
Notes by Ēriks Ešenvalds
I was a budding 11-year-old composer when I heard my first true muse Whitney Houston. During the Soviet occupation of Latvia, we couldn’t get the sheet music of her songs. But I loved watching her on TV and collecting her cassette tapes. Houston’s songs surprised, intrigued, and inspired me on my own musical journey for which I owe her a great posthumous thank you. The natural flow of harmonies in her songs impressed me very deeply. In 2004, when I was a student of composition at the Latvian Academy of Music, I decided to create an arrangement of Amazing grace for Kamēr…and its artistic director Māris Sirmais. In the score I included a solo part that I imagined one day might be performed by Whitney Houston with an American choir. Professor Sirmais was extremely busy at the time, so he soon forgot about my score. Two years later, when I became a singer under Māris in the State Choir Latvija, I shyly reminded him about the song. He found it in a drawer in his desk, played it through on the piano, and immediately gave it to the choir Kamēr…. A month later the song had its premiere in Riga and soon enough it was performed around the globe. By now it has reached all continents except Antarctica.

Five Negro Spirituals from 'A child of our time'
Notes by Anthony Burton
Tippett’s major wartime achievement was his oratorio A child of our time, written between 1939 and 1943, and first performed in London in March 1944. The composer’s text was based on recent events, the murder of a Nazi diplomat in 1938 by a Polish Jewish refugee, and the savage Nazi reprisals of 'Kristallnacht'. But it comments on them not from a Christian or patriotic point of view, but from that of a Jungian pacifist, arguing for every individual’s need to come to terms with the 'dark side' of his or her personality, rather than project hatred on to an enemy. Musically, Tippett modelled the work on Handel’s Messiah and the Passions of Bach; but in place of the Lutheran chorales which punctuate the Passions, he used Afro-American spirituals.

These spirituals, powerful and universally familiar expressions of the sufferings of the victims of oppression, make a profoundly moving effect, both in their original context, and in the a cappella arrangement which Tippett made of them in 1958 at the request of his German publisher. Of these Five Spirituals from A child of our time, the first two are essentially as in the oratorio, while the last three are reworked to incorporate, or replace, independent orchestral parts; the original solo parts are retained for 'leaders' of each section.

Ave Maria
Notes by Robert Jordan
Bavarian-born Franz Xaver Biebl eventually settled in Munich where he became the first head of choral programming for the Bavarian Radio. He had a huge influence on choral music in Germany even though, with typical modesty, he described himself as 'a little composer of little songs'. One of those 'little songs' was his Ave Maria, composed in 1964, when Biebl was choirmaster at the Fürstenfeldbruck Church near Munich. It was requested by one of his choir members, a fireman, who also sang in a firemen’s choir—which is why Biebl’s original scoring was for double men’s chorus. Regarded superciliously for years in Germany, the piece remained virtually unknown in North America until the recording thirty years later by the San Francisco-based men’s choir, Chanticleer, became enormously popular. In response, Biebl arranged it for other vocal and orchestral combinations. His lush, consonant harmonies are conservative but acutely poignant.