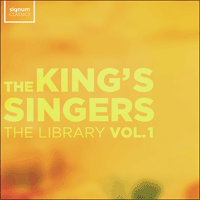 The King's Singers – The Library, Vol. 1

There can be few vocal ensembles equally adept in so many genres as The King’s Singers. Here they present the first in a series devoted to their trademark close-harmony arrangements of favourites old (Gershwin and Lennon/McCartney) and new (Kacey Musgraves and BTS).

'The Library' is the name of a series of EP releases that celebrates our close-harmony library, both historically and as it grows each year. Close-harmony is the phrase we have always used to describe its lighter repertoire, and we see 'The Library' as our chance to make sure this rich vein of great song-writing and arranging gets the place of prominence it deserves. The Library recording series will involve regular releases which will come out alongside other touring and recording projects, giving us an output for revisiting some of these old favourites and commissioning brand new close harmony from recent releases. Every volume in 'The Library' series will capture a variety of songs, celebrating the wonderful diversity of music in our world today.

This first volume of 'The Library' sets the tone for the series. Its seven tracks encompass some of the many styles within our close-harmony library. Four of the tracks are brand new arrangements, written especially for this project and never before recorded; the other three of them are gems from the group’s existing library, loved by audiences around the world and recorded on albums by previous incarnations of The King’s Singers. With all of the tracks on Volume 1 however, we believe that the quality of the songwriting is so high that the songs stand the test of time, no matter when they were released, and could become classics of our library for decades to come.

The three existing arrangements (Oh! I can’t sit down, The rose, and Yesterday) have become iconic items within our library. Oh! I can’t sit down is a song taken from George Gershwin’s opera Porgy and Bess, which was written in 1935, and was the first opera written for an entirely African-American cast. This particular song comes at a high point in the narrative, as the cast prepare to go for a picnic. Bob Chilcott’s arrangement of the song—written during his time as a member of The King’s Singers—builds up complicated overlapping rhythmics patterns, with the melody moving between parts as the song progresses, leading to a technicolor harmonic ending. The rose is a song written by the American songwriter Amanda McBroom, and made famous in its recording by Bette Midler for the 1979 film also called The rose. This arrangement was created by Nic Raine for The King’s Singers’ Emmy Award-winning album Circle of Life in 1996. It was originally designed to be performed with orchestra, but when the group recorded their a cappella parts, it was decided that the track should be purely vocal, and it was left in this a cappella version. Yesterday is one of the most iconic songs to have been written by The Beatles’ songwriting partnership John Lennon and Paul McCartney. This arrangement—another by Bob Chilcott—is beloved of King’s Singers audiences around the world, and we felt that Volume 1 of 'The Library' had to reflect the special place that The Beatles have in our history, and within our close harmony repertoire.

Of the brand new songs on this recording, probably the most unusual is Kieran Brunt’s arrangement of The Ballad of Nornagest, which is a folksong from the Faroe Islands—the remote island grouping in the North Sea, roughly equidistant between Scotland, Iceland and Norway. We were invited to sing in the Faroe Islands for the first time in 2017, and when we arrived we instantly fell in love with its magical atmosphere and decided to commission a new folksong from the islands, in the rarely-spoken Faroese language, from Kieran Brunt—a composer and producer who has personal connections to the islands. The text of The Ballad of Nornagest comes from an epic saga poem, Nornagests Rima, which tells the story of Nornagest—a squire to the mythical knight Sigurth—who proves his courage in this tale. Another of the new arrangements in 'The Library' Vol. 1 is of a song by the British songwriter Beth Orton, who is known for mixing folk styles and electronica. Call me the breeze is from her 2012 album Sugaring Season, and was played whilst Christopher Bruerton’s wife walked down the aisle at their wedding in 2017. Chris’s arrangement was an anniversary gift to her two years later. The truth untold was released in 2018 by the Korean Pop group BTS, in collaboration with the American DJ and producer Steve Aoki, on BTS’s album Love Yourself: Tear, and is sung with phrases interspersing Korean and English (designed to reflect BTS’s huge popularity in both Asia and the West). The arrangement is by Ed Rex, a music technology entrepreneur who sung as a choral scholar in King’s College Choir whilst studying Music at Cambridge University. The final of the new arrangements on the album, Rainbow was written after the group heard its songwriter, Kacey Musgraves, perform it at the Grammy awards ceremony in Los Angeles in February 2019. The message of positivity and comfort in the lyrics, as well as its beautiful melody, made it a song we wanted to arrange and champion, so Patrick Dunachie arranged it shortly after we heard Kacey Musgraves’ performance.