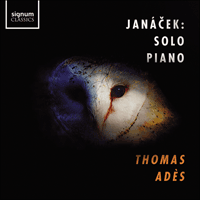 Janáček’s major solo piano works—On the overgrown path (1900-1911), the piano sonata (1905/6) and In the mists (1912/13)—date from the earlier part of his career and contain music that is both profoundly individual and also integral to the composer's stature as one the most original voices of early twentieth-century music. 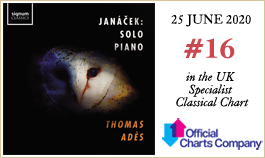 Nearly all of the music for solo piano written by Leoš Janáček (1854-1928) dates from before the First World War and thus belongs to the period before the composer’s remarkable late creative surge, which was triggered by the hugely successful 1916 production in Prague of his third opera, Jenůfa (1894-1903; rev. 1907/8), and facilitated by his retirement from his teaching position at the Brno Organ School. Nevertheless, all three of Janáček’s major solo piano works—On the overgrown path (1900/11), 1.X.1905, From the street (1905/6) and In the mists (1912/13)—contain music that is both profoundly individual and also integral to the now widespread view of the composer as one the most original musical voices of early twentieth-century music.

The genesis of On the overgrown path was somewhat convoluted. There are fifteen pieces divided into two series in modern editions. Book 1 comprises ten piano ‘miniatures’ with individual titles (first published all together in December 1911), and the posthumously published Book 2 (1942) contains five more pieces without individual titles that were not actually composed as a set. In 1900, Janáček initially wrote seven short pieces for harmonium, five of which (now Nos 1, 2, 4, 7 and 10 of Book 1) were published as part of a series of works for harmonium entitled Slavonic Melodies in 1901 (Nos 1, 2 and 10) and 1902 (Nos 4 and 7). The other two pieces (later published as Nos 3 and 5 of Book 2) seem to have been put aside because they were less obviously suitable for harmonium. In mid-1908, after a gap of six years, Janáček wrote Nos 3, 6 and 9 of Book 1, also refashioning the whole collection as a piano work. By 1911, Nos 5 and 8 of Book 1 had been added, and what are now Nos 1 and 2 of Book 2 had been composed. The piece published as No 4 of Book 2 (not recorded here) is actually unfinished: its manuscript comprises a sketchy initial ink draft with incomplete pencil revisions. The only piece from Book 2 published in the composer’s lifetime was the first one, which appeared without a title and billed as No 1 of a new Book of On the overgrown path in the literary supplement of the Brno daily newspaper Lidové noviny on 30 September 1911.

Although Janáček had arrived at the collective title for On the overgrown path by 1901, the individual titles for the ‘miniatures’ in Book 1 were devised and revised gradually in the period 1908-11, some of them undergoing radical change: No 2, for example, was first ‘A declaration of love’ then ‘A love song’ before the composer settled on the enigmatic ‘A blown-away leaf’. What eventually emerged was an over-arching narrative with a double trajectory embracing what Janáček described as ‘distant reminiscences’ of both his childhood in rural north-eastern Moravia and the more recent death in 1903 of his beloved daughter Olga. Janáček’s biographer, John Tyrrell, posits a gradual progression into grief and anguish across Book 1, although there is actually a clear overlying arrangement of two groups of five mainly devoted respectively to the composer’s childhood and to Olga’s death. The titles of the first group of five allude to episodes such as evenings by the fireside (No 1), children’s games (No 3) and an annual religious procession near the village where Janáček lived as a child (No 4). Three of the titles in the second group of five allude specifically to anguished emotions (Nos 6, 8 and 9) and Janáček revealed in a 1908 letter to his friend the critic Jan Branberger that the ‘Good night!’ of No 7 was a metaphor for Olga’s death, also fleshing out the reasons for the tears of No 9: ‘The premonition of certain death. During the hot summer nights that angelic being lay in such mortal anguish’. He continues: ‘In the last number the ominous motif the barn owl is heard’. The descending-third motif to which the composer refers actually more resembles the call of a tawny owl than that of a barn owl, but the eerie sense of impending catastrophe created in this remarkable piece aligns precisely with the barn owl’s folkloric status as a harbinger of doom.

An obvious influence on Book 1 of On the overgrown path is Musorgsky: several commentators have noted allusions to the ‘Promenade’ from Pictures at an Exhibition in ‘Our evenings’ (No 1) and to ‘Baba Yaga’ from the same work in ‘The barn owl has not flown away’ (No 10). Book 1 also owes much to Schumann’s Scenes of childhood in terms of overall conception and connections between individual pieces: for example, there are clear programmatic, thematic and textural parallels between ‘Our evenings’ and Schumann’s ‘At the fireside’ (No 8 of Scenes of childhood), between ‘Come with us!’ and ‘Blindman’s buff’ (No 3), and between ‘Unutterable anguish’ and ‘Almost too serious’ (No 10). Perhaps the two most intimately connected pieces are ‘In tears’ and ‘Child falling asleep’ (No 12), which share a musical fabric constructed from short, repeated circular figures deployed in imitation and an ABA form whose middle section allegorises progression into a different realm: serene slumber in Schumann’s piece, death in Janáček’s. Ultimately, though, such threads of dialogue with existing repertoire are secondary; the sound world of Book 1 of On the overgrown path stands out as a highly original and haunting expression of grief and loss.

The looser assemblage of pieces that form Book 2 of On the overgrown path contains music that is, if lacking an extra-musical narrative, no less compelling. The two later pieces (Nos 1 and 2 in the published ordering) incorporate a striking range of expression within their deceptively slender ABA frames and exhibit an intense gestural concentration that foreshadows In the mists. The pair of pieces dating from 1900/1 (Nos 3 and 5)—bizarrely dismissed by Tyrrell as not sounding ‘remotely like Janáček’—are notable for their ingenious fusion of the piano miniature with key components of grander sonata-form processes.

During the six-year break in the composition of On the overgrown path, Janáček wrote the extraordinary 1. X. 1905 From the street, usually classified as a Piano Sonata but apparently never named as such by the composer. The work was inspired by the death of a 20-year-old joiner’s apprentice, František Pavlík, as the result of the police and army breaking up a rally supporting the Czech population of Brno’s request for the setting up of a Czech University in this bilingual city. It was composed between 2 October 1905 and 27 January 1906 (the date of the premiere). Originally, there were three movements entitled ‘Foreboding’, ‘Elegy’ and ‘Funeral March’. During a rehearsal for the first performance, Janáček expressed dissatisfaction with the third movement, and the following day during the final run-through, in what now seems an inexplicable act of self-criticism, he snatched away the music from the pianist, Ludmila Tučková, tore out this third movement and burnt it in the stove. The unfortunate Tučková was thus forced to perform only the remaining torso of two movements. Later that year after a further informal performance of the remaining two movements in Prague the composer allegedly threw the manuscript into the river Vltava. Tučková hung on to her copy, however, and in 1924 as part of the celebrations for his seventieth birthday Janáček relented and sanctioned publication of the two movements, the second of which now had the title ‘Death’.

A century on from these events, it seems unimaginable that this remarkable work came close to disappearing from the repertoire altogether, even if it is also difficult to visualise how a third equally uncompromising and gloomy movement (presumably in E flat minor like the other two) might have followed the rhetorically definitive final bars of ‘Death’. Both surviving movements achieve maximum expressive power from the minimum of means—indeed, the persistent first-beat semiquaver rests in ‘Death’ function as a quasi-motif in their own right and, as Thomas Adès persuasively argues, at the moment where the opening music returns the semiquaver rest is elevated ‘to the status of a sort of secondary tonic’. Both movements also engage with, and transform, late-nineteenth-century sonata-form procedures in a wholly original way. In ‘Foreboding’, for example, what were by 1900 commonplace sonata-form ‘deformations’ such as the recapitulation of the opening theme over a dominant pedal and a non-tonic return of the second theme are breathtakingly defamiliarised by small enharmonic reinterpretations that prove to be seismic in their implications, and by subtle modal modifications and refinements of texture.

The last of Janáček’s major piano works, the four-movement cycle In the mists, dates from a time when the composer was at a low ebb, psychologically because of his unsuccessful attempts to have his operas performed, and physically due to rheumatism and other ailments. The immediate catalyst for the cycle may well have been a performance in January 1928 at the Brno Organ School of Debussy’s ‘Reflets dans l’eau’ (first published in 1905); certainly, In the mists bears faint traces of contact with Debussy’s piano style. Janáček was also buoyed by a favourable critical response to the publication in December 1911 of Book 1 of On the overgrown path. The first version of In the mists (initially entitled Mhy—'Mists') was completed by 21 April 1912, and it was revised probably in early 1913. The premiere and publication of the first edition was in late 1913. Ten years later a new edition was commissioned in honour of Janáček’s seventieth birthday. The pianist and composer Václav Štěpán, who had given what seems to have been the first Prague performance of the work in December 1922, was entrusted with revising the score. Unfortunately, he exceeded his brief of correcting errors, adding heavy-handed dynamic markings and rewriting the finale’s climax with some virtuoso figuration that is entirely out of keeping with the understated character of the work. (The original 1913 versions of all the relevant passages are performed here.)

All four movements of In the mists involve the alternation and incremental modification of two contrasting groups of material, although the overlying structure of each movement is different from that of the others and none conforms to an established pattern. The work is unquestionably Janáček’s masterpiece in terms of its achievement of an astonishing expressive power through maximum economy of materials. As Thomas Adès puts it, ‘The greatness of In the mists lies in its very claustrophobia, and austerity of means affecting every aspect of the music. The solo piano becomes a narrow space with four solid walls’.

'Nothing but pranks and puns'? There’s obviously more to this infinitely multifaceted music than Janáček’s dismissive description in a letter to Max Brod; but it is true that we find there phrases, notes, whole sections that repeat, or recur with tiny but vital changes, like memories turned over and viewed in the lights of different eras. It is telling that the earliest piece on this record is an 'In Memoriam', and the latest is 'Remembrance'. For this is music which obsessively seeks to recreate, to remember the past: it creates a memory of a memory of a memory, gradually building, with each reiteration, each repetition, whether exact or angled slightly away, every revisiting of a melody or a tonality, the outline of a path which has been walked down before—an overgrown path—leading to the place, the actual event, the hooting owl, the traces of a face, the vanished human voices which miraculously sound once again in this most intensely nostalgic music.