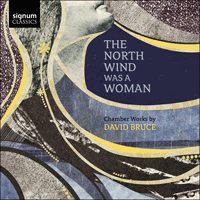 The north wind was a woman & other chamber music

David Bruce has achieved global recognition as a composer, rightly celebrated for his richly colourful, poetic, and joyful music. For this collection of his smaller-scale works, his long-time collaborators Avi Avital, the Dover Quartet and Camerata Pacifica are joined by the mesmerizing soprano of Nora Fischer.

Cymbeline
Cymbeline is a new work for mandolin and string quartet, written specially for mandolin virtuoso Avi Avital. The title is an old Celtic word meaning ‘Lord of the Sun’. I think the idea of the piece being about the sun emerged out of the colours of the string quartet and the mandolin together. Although I don’t think of myself as a synaesthetic person I kept having a strong sense of the colour gold in the early sketches for the piece. The mandolin itself has always seemed to me to create a ‘golden’ sound, and when combined with the warmth of the strings it seems now obvious that I should be drawn towards something warm and golden.

The sun was one of the first objects of worship and it has been surmised that the idea of a holy trinity (found not just in Christianity, but in numerous earlier religions) relates to the three distinct positions of the sun—sunrise (= father), noon (= son), and sunset (= spirit). Sunrise is ‘the father of the day’; midday represents the fullness of energy, the son; and sunset is a time for contemplation and reflection—the spirit. To me, these three states represent not just 'father, son and spirit' but also perhaps, the reflection upon an action about to happen (sunrise), the action itself (noon), and the reflection on the action that happened (sunset).

Cymbeline accordingly is in three movements, with two contemplative outer movements surrounding an energetic central movement. I see the piece as a contemplation of our relationship with this fiery giver of life, whose significance to us is often overlooked in the modern world, but who still really does rule over us all.

The north wind was a woman
I have been lucky enough to spend some time recently collaborating with the writer Aimee Bender. By chance I came across Aimee’s extraordinary collection of short stories ‘Willful Creatures’ and I instantly felt we shared many artistic goals and ideals. Aimee’s stories are often described as ‘modern fairytales’, they have something of the tone of a fairytale (a generalised sense of place and time, a willingness to incorporate the magical or supernatural, and often, a rather savage streak), but are unmistakably modern in tone, and a million miles from the Victorian sensibilities and morals of Hans Andersen or the Brothers Grimm. Aimee creates unique and extraordinary worlds, full of color and magic, tangential to our own, but somehow, in an often witty and understated way, reflecting back on our own world, returning us to it with fresh eyes. It is an approach to art which I find highly invigorating and inspiring.

Aimee showed me the libretto to an opera she had written for the composer John B Hedges and I was captivated as soon as I realized it was the sea itself singing the opening lines—it was saying sorry to all the ships it had to let sink because its shoulders were too heavy and not meant for carrying boats. I loved the idea of an ‘element’ singing, and some time later the idea occurred to me that it could make for an interesting song-cycle to have a series of different elements, each singing in the first person. I approached Alasdair Middleton (the librettist for my opera A bird in your ear) with this idea. Alasdair latched on to the concept immediately—the first poem he produced was Wind who, marvellously, was in unrequited love; followed by a rather melancholy and mysterious Night, and a crazed Moon who ‘wants to kill’. I later added two of my own poems to the collection, a rather bleak Snow that sees itself as ‘frozen tears’, and a Mountain that contemplates its only friendship over the years—with the night sky.

The consolation of rain
We all take consolation from different things, and without wanting to be overly morbid, I would like to think that after I die, my loved ones could take consolation from the sense that I was quite literally all around them, in the air, water and earth as part of the natural cycle of things. There are numerous poems on this theme, including the famous 'Do not stand at my grave and weep' by Mary Elizabeth Frye in which, rather than being dead, the deceased speaks directly to us: 'I am a thousand winds that blow, I am the diamond glints on snow, I am the sunlight on ripened grain, I am the gentle autumn rain.' Clearly I am not alone in my way of thinking there is something very moving about the idea that you can reconnect with someone you’ve lost simply by looking at nature.

Perhaps an inevitable topic for an Englishman, the focus in this piece is rain. Taking Debussy’s method of portraying the sea in La mer as something of a model, the piece is primarily an abstract musical construction, but one that constantly and variously evokes different aural images of rain, whether it be rippling, glistening, dripping, rumbling, swooshing or showering; gathering pace or subsiding; distantly echoing or vigorously present. But throughout, the impression is of rain not as dark and depressing, but as something positive, consoling, life-affirming and renewing—the ‘gentle autumn rain’ mentioned in the Frye poem.

The consolation of rain is in five short movements, each in a way, a kind of ‘song without words’.

The three pieces on this disc represent David Bruce’s highly personal musical and spiritual responses to nature. Cymbeline (an old Celtic word meaning ‘Lord of the Sun’) draws on ancient religious attitudes to the sun, and is framed as a trinity of birth, life and death, as represented by sunrise, noon and sunset.

The north wind was a woman song cycle treats various aspects of nature as human characters, as if they were manifestations of human emotions. So the north wind for example, is a jilted lover who ‘rattles your windows, bangs at your doors’. Scored for a folk-imbued ensemble, featuring prominent parts for mandolin and harp, the cycle ranges from the wild rage of the ‘lunatic moon’ to the sombre and tender loneliness of the mountain contemplating her only friend throughout the years—the night sky.

The consolation of rain is a moving reflection on loss and the restorative power of nature. When a loved one passes away the atoms of their body literally become part of the natural world, which means that just by observing nature, rain, weather, you are in a very real sense ‘with your loved one’; a fact which is immensely consoling.

Bruce has a close relationship with many of the featured artists, he has collaborated with Avi Avital on five pieces, most recently a commission from NDR in Germany. Avital has toured Cymbeline (commissioned by San Diego Symphony) around the world including a recent North American tour with Dover Quartet. Camerata Pacifica have also worked frequently with Bruce and commissioned The consolation of rain from him in 2017. The north wind was a woman was commissioned by Chamber Music Society of Lincoln Center and features many of the same players involved in the 2009 premiere, including harpist Bridget Kibbey (another close collaborator, who also features on the Camerata Pacifica recording).