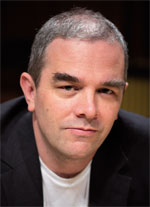 born: 1970
country: USA
David Bruce has achieved recognition as a composer on both sides of the Atlantic for music that is richly colourful, poetic and joyful. Recent commissions include from the BBC Proms, Carnegie Hall, Covent Garden and Glyndebourne.

Born in Stamford, Connecticut in 1970 David Bruce grew up in England and now enjoys a growing reputation on both sides of the Atlantic.

In the 2013/14 season David was Associate Composer of the San Diego Symphony, for whom he wrote three pieces, including Night parade for the orchestra’s highly successful Carnegie Hall debut in October 2013; and the violin concerto Fragile light for Gil Shaham for 2014.

His fourth Carnegie Hall commission That time with you (2013) for mezzo-soprano Kelley O’Connor follows Steampunk (2011), Gumboots (2008) and Piosenki (2006), which have all gone on to be widely performed by leading ensembles around the world.

In the UK, David’s piece Sidechaining was featured in the 2018 BBC Proms, and he was 2012-13 Composer-in-Residence with the Royal Opera House, who co-commissioned with Glyndebourne the opera Nothing (after the book by Janne Teller), which premiered in Glyndebourne in February 2016. Bruce’s chamber opera The firework maker’s daughter (after the Philip Pullman story) toured the UK and New York in 2013 and was shortlisted for both the British Composer Awards, and the 2014 Olivier Awards for Best New Opera Production. Alongside composing, David runs both the sheet music website 8notes. com and the popular YouTube channel ‘David Bruce Composer’.