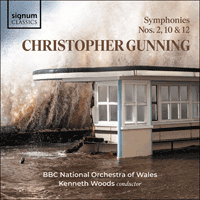 A chance to enjoy a taste of the symphonic output of a composer more usually feted for his television work.

‘The three symphonies here definitely reveal a substantial concert composer whose stylistic influences and allegiances—Sibelius, Malcolm Arnold and Walton come easily to mind—never prevent him writing very individual music … there's no doubt that Kenneth Woods and the BBC National Orchestra of Wales really enjoy themselves performing such personable and communicative music. The recorded sound is excellent too’ (BBC Music Magazine)

The obvious question is why did No 2 have to wait so long for a performance or recording? I was somehow not happy with it and yet didn’t immediately know exactly what to do. Was the form at fault? Or was it the content? Should I scrap the whole thing? I put it away and it remained lurking in a drawer until early 2018, when I felt able to tackle it with renewed determination. Writing symphonies can be like that—a process of composing and re-composing, sometimes over a period of several years. Just look at the agonising processes through which other composers went—Beethoven, or more recently Sibelius for example. The various versions of the latter’s 5th Symphony or Violin Concerto are testament to the composer’s constant desire to get things ‘just right’.

When the opportunity to record three new symphonies with the BBC National Orchestra of Wales arose, I knew that No 10 would be a hot contender, and No 12 too, and now I thought I could finally get No 2 ready, complete with a good many changes resulting from my revisions. Actually, it was rather like a teacher working on the younger composer’s music, educating as he went. I cut out some bars, tightened the structure here and there, and rationalised the orchestration. It was not a painful process, but an enjoyable one, for I felt the alterations to be positive improvements.

I had no such difficulties with Symphony No 10, and composed it in a fairly natural way, the material stated at the beginning constantly leading me from one section to the next. The result could be likened to a series of variations, each contrasting with the last. There is no longer a ‘standard’ format for a symphony; in classical formats there would usually be four movements, but Sibelius changed all that with his mighty seventh symphony which has but one movement in the space of little more than twenty minutes. My tenth symphony also plays for some 20 minutes non-stop, and follows a dramatic narrative which to me is vitally important; I have always looked on my symphonies as novels, with characters in the form of themes or motifs which return and develop.

One also chooses a form to suit the emotional range of the music one wishes to compose—or perhaps the form emerges from the material one has. I suppose that was how No 10 came into being. I knew the piece had to have a wide emotional range but I also knew it had to be relatively concise and straightforward for a listener to follow. If all this sounds excessively technical, I would counter such suggestions by saying that for me the emotional content is everything; if music doesn’t move us, it really is of no value at all.

Symphony No 2 is in three movements; in the first, following some ‘tick-tock’ pizziccato notes, the bass clarinet plays a prominent role, with its darkly chromatic scalic passages, but it is not long before a second theme, akin to an announcement, takes centre stage. There is an extensive development of the first few themes, until the piccolo announces a complete change of tempo and mood. Everything now takes on a more dramatic character, building to a climax and a big statement of the second idea. Finally there is a return to the very opening, and some more ‘tick-tock’ pizziccati and the bass clarinet returns with more of those scalic passages.

The second movement is slow, mainly quiet, and thoughtful, although it has moments of greater intensity.

The third movement is medium-fast and mainly buoyant, but sometimes quite strident. At the very end, the opening theme from the first movement returns in the horns and strings, this time forceful or even triumphant.

Symphony No 12 has two movements. It is far more overtly tonal than Nos 2 or 10. I needed to write something more direct, even melodic, and the textures are mostly clear and uncomplicated.

The first movement begins with a rhythmic figure and a feeling of uncertainty. Things gradually open up, and the movement contains lyrical sections as well as more stormy music which eventually leads to a climax. But we return to a mood more like the opening, ending on a note of quiet mystery.

Movement two was inspired by the funeral of a friend. A bell calls everyone to the chapel and the strings intone elegiac music which is gradually taken up by the rest of the orchestra. We are reminded of events and personalities from my friend’s life, including his love of English music and the English countryside. This subsides into quiet, sombre music leaving the bell tolling as people wander off thoughtfully into the evening’s fading light.

I am grateful to Kenneth Woods for his support and for conducting the recording sessions so sympathetically and expertly. The members of the BBC National Orchestra of Wales also fully deserve my thanks for their consummate musicianship and professionalism and for making the sessions so enjoyable. Last but not least, Mike Hatch and Mike Cox must be congratulated for their sensitivity and expertise in the recording booth. A project like this depends on the input of a great many people and I am deeply appreciative of all those who helped along the way.