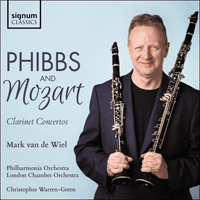 Joseph Phibbs’ concerto—a stunning and virtuosic new work, and the fruit of a long collaboration between composer and clarinettist—is here paired with a scintillating live concert-recording of Mozart’s timeless work for basset clarinet.

‘The Mozart (with concluding applause) is never less than pleasant; the Phibbs, however, is essential’ (Gramophone)
‘Christopher Warren-Green secures crisp rhythms and vivid detail from the Philharmonia in lifelike sound. In choosing the Mozart as companion piece, van de Wiel faces the stiffest recording competition. But he also has an angle: treating this last of Mozart's concertos less with the nostalgic languor of a composer already foreseeing the end than with the straight-toned vigour of a still-young creator who thinks life is going to go on. It is a valid approach’ (BBC Music Magazine)

‘Phibbs (born 1974), writing especially for van de Wiel, has created a four-movement work of considerable appeal. A lyrical opening might be heard as dawn breaking, with some enchanted chords suggesting glints of sunrise, before a slinky dance emerges (as if Malcolm Arnold had visited America wearing a blue suit) … once again Warren-Green conducts with attention to detail (he is a former concertmaster of the Philharmonia Orchestra) and van de Wiel’s colleagues offer complete support to the unflagging clarinettist, Hatch again capturing the distinction of the music and this performance’ (Classical Source)» More

Phibbs Clarinet Concerto (composer’s introduction)
This 24-minute work is the result of a long and creative friendship with Mark van de Wiel, whose extraordinary expressive and technical scope—ranging from standard classical repertoire to the most demanding contemporary works—in large part shaped the work’s form and character.

Comprising four movements, the work opens with a slow introduction, the unfolding of the clarinet’s opening theme supported by soft, sustained strings. A type of rondo emerges, signalled by a soft pizzicato ostinato in the lower strings, over which the clarinet’s earlier theme is transformed into a solitary, blues-inspired refrain. The mood here is urban, snatches of dance rhythms accompanying the soloist’s ever-expanding melodic gestures, while elsewhere a myriad of orchestral figuration (first in the woodwind, and later the strings) is suggestive of city lights.

A more lyrical theme appears towards the end of the movement, before giving way to a fast coda. A cadenza serves as a bridge to the second movement, a fast and unsettled type of nocturne-fantasy whose principal thematic material is defined by a short recurring scalic figure in the clarinet which expands and transforms as the movement progresses. A number of contrasting episodes allude to various non-classical traditions to which the clarinet is often linked, including Eastern European folk music, before the movement closes abruptly.

The third movement, a slow and at times mournful vocalise, is reminiscent of the work’s opening by way of its pared-down orchestral scoring, and features a simple repeated harmonic pattern over which the soloist ‘sings’ in an often impassioned and at times strident manner.

Following without a break, the fourth movement harks back to the urban-inspired world of the first, though here with greater abandon. Ever denser, rising chords in the orchestra punctuate florid gestures in the clarinet, before leading to a faster coda. A syncopated passacaglia emerges, inspired by its literal meaning (‘street walk’), the soloist’s at times wild, quasi-improvisatory lines weaving through a constantly shifting orchestral backdrop, underpinned by the repeated bass line which characterises this form. This in turn accelerates towards the end of the movement to form a faster ‘walking bass’, before a final ascending flourish brings the work to a close.

My thanks to Mark, the work’s dedicatee; the Philharmonia, at the suggestion of former Managing Director David Whelton; and Malmö Live Konserthus, at the suggestion of Per Hedberg, Head of Programming, for their generous support. The world and London premieres were given by Mark van de Wiel and the Philharmonia under Edward Gardner on 4 and 5 November 2017 in the Anvil, Basingstoke, and the Royal Festival Hall, followed by the premiere by a non-professional orchestra with the Oxford Symphony Orchestra under Robert Max on 18 November. Mark also gave the Nordic premiere with the Malmö Symphony Orchestra under Alexander Shelley in March 2019.

Mozart Clarinet Concerto in A major K622
Often, throughout musical history, the supreme artistry of a particular performer has inspired a composer to create some of his most distinctive works. Thus Mozart wrote his horn concertos for the cheese-monger Joseph Leutgeb, Weber and Brahms composed glorious clarinet works for Heinrich Baermann and Richard Mühlfeld respectively, and Britten wrote numerous operatic roles and song-cycles especially for the tenor voice of Peter Pears.

The last and greatest of Mozart’s several wind concertos is the clarinet concerto, completed only weeks before his premature death. At this time he was inspired by the outstanding musicianship of the clarinettist Anton Stadler, composing this concerto—as well as a trio with viola and piano, a quintet and obbligato parts in two operatic arias—especially for him. Stadler, a close friend of Mozart and fellow-member of the Masonic Lodge to which he belonged, had recently developed a new type of clarinet with an extension of four extra semitones to the register which particularly fascinated him—the lowest. This basset-clarinet was the instrument for which Mozart originally composed both the concerto and the quintet, but it soon became obsolete. Also the manuscripts of both works were lost, so the concerto was published in an adaptation (by an unknown editor) for orthodox clarinet. Here Mark van de Wiel plays a reconstruction of the original basset-clarinet version.

Mozart was the absolute professional in his treatment of every orchestral instrument, showing deep understanding of the special character and technique of each one. For instance, in this concerto he exploits the clarinet’s easy agility of movement from one extreme of its range to the other, often requiring the soloist to leap between high and low registers even on successive notes in a melody. Elsewhere alternating high and low phrases occasionally suggest an operatic dialogue between soprano (or mezzo-soprano) and baritone (or bass). In common with other works of Mozart’s last year—including The Magic Flute and the final piano concerto in B flat, K595—the clarinet concerto combines a new degree of simplicity with limpid grace and transparency of texture. The omission of oboes contributes to the mellower orchestral sound, while the key of A major—as in the K488 piano concerto—seems, for Mozart, to have been associated with a certain characteristic tone-colour. Many composers favoured a more classical purity of language in their late music, and of course one may wonder how Mozart would have continued had he lived beyond the age of thirty-five. However, we should guard against the notion that Mozart was aware of impending death when he completed works such as the K595 piano concerto or this clarinet concerto in 1791, because sketched material for the first movement of each work actually dates from about three years earlier. Anton Stadler gave the premiere in Prague on 16 October 1791.

The wonderful gift of Mozart’s concerto permeates our lives as clarinettists, both as performers and teachers. Its emotional range, elegance, technical challenges and operatic exploration of a wide range of voices and colours constantly inspire us. Throughout the first movement we can hear Mozart celebrating his admiration for Stadler and his instrument with a constantly developing melodic line moving from tenderness and yearning to passages of considerable virtuoso display. The clarinet is established as a lyric soprano from the outset, but soon starts to explore its range in duet with itself as soprano and tenor or even soprano and baritone. The extra range of the basset clarinet allows for dramatic contrasts of register, with frequent plunges from the upper register down to the lowest notes, particularly in the central section which explores the world of Don Giovanni. The adagio’s theme offers a serenity which the clarinet can portray perhaps better than any other wind instrument, and its middle section presents a succession of operatic voices—perhaps Donna Anna, Fiordiligi, Don Ottavio and Leporello all appear together here. The bubbling rondo theme of the finale, with its characteristic three repeated notes (a reference to a Masonic knock, perhaps?) launches a wide ranging movement of high spirits and drama with many shadows and moments of melancholy on the way.

The significance of Mozart writing for Stadler as his fellow Mason, is considerable. The concerto began life as a concerto for in G major for basset horn, but once Stadler finished work on his basset clarinet in A, it found its true home in the key of three sharps, a bright counterpart to the three flats of The Magic Flute. Thea King has pointed out the coded threes within this concerto—towards the end of the first movement the same music, in three sharps and using intervals of a third, is played in three successive bars in three octaves. The landing of the third repetition at bar 333 can only be a code between the two friends, adding yet another level to this sublime concerto. But even with Mozart’s wonderful advertisements in the concerto, quintet and La Clemenza di Tito, the basset clarinet did not come into general use, probably because of the technical difficulties caused by the extra keywork and the extra weight. A concerto fragment of 1792 intended for Stadler by Mozart’s pupil Süssmayr uses an even wider full four octave range, but it took another 176 years before Sir Harrison Birtwistle expanded it one semitone further in his Linoi of 1968, written for Alan Hacker, one of the pioneers of playing the Mozart concerto in the original version.