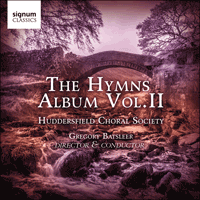 A new collection of hymns from the internationally renowned Huddersfield Choral Society, including modern 'classics' and ranging back through the Vaughan Williams revival to tunes having their origins in the German Baroque.

Hymns are part of our national culture, available to believers and non-believers alike. Some of the most popular hymn-tunes—such as O sacred head, sore wounded or Good Christians all—are over four hundred years old, while others date from the latter half of the twentieth century. Many composers, including such diverse figures as Bach and Charles Ives, have incorporated hymn-tunes in their major works, while Vaughan Williams became enthused while occupied as editor of The English Hymnal of 1906. The high quality of this collection is largely due to his absorption in, and growing passion for, the subject. The time and energy he devoted to the task greatly exceeded his original remit.

The melody of Thy hand, O God, has guided, known as 'Thornbury', was written by the Gloucestershire-born composer and organist Basil Harwood (1859-1949). Drawn from Ephesians, the words by Edward Hayes Plumptre were first published in 1864.

All things bright and beautiful has words by Mrs Cecil F Alexander, while the most familiar tune is by William Henry Monk (1823-1889). Monk was appointed editor of Hymns Ancient and Modern, first published in 1861 and subsequently one of the best-selling books of its kind. Drawing upon verses from the Apostles’ Creed and a particular verse from Coleridge’s The Rime of the Ancient Mariner, the text of All things bright and beautiful first appeared in 1848 in Mrs Cecil Alexander’s Hymns for Little Children.

The hymn-tune for Guide me, O thou great Jehovah—'Cwm Rhondda'—was written by the Welsh composer John Hughes (1873-1932) to a text by William Williams. Hughes worked down a mine from the age of twelve and later was engaged as a clerk for the Great Western Colliery, Pontypridd for over forty years. Though he played the organ, composing hymns was purely a hobby.

How firm a foundation was first published in 1787 in A Selection of Hymns from the Best Authors. The melody (known as 'Montgomery') is believed to have been composed by Samuel Jarvis (d1785), though other sources cite Joseph Funk or John Stanley. It has been sung at the funerals of several US politicians and was the favourite hymn of General Robert E Lee.

Praise, my soul, the King of Heaven ('Lauda anima'), drawing on Psalm 103, has a text by Henry Francis Lyte and music by John Goss (1800-1880). Goss, who was a boy chorister of the Chapel Royal, later organist at St Pauls, was one of the most distinguished of early Victorian church composers. His other widely popular hymn-melody is the carol See, amid the winter’s snow.

Amazing grace has words by John Newton, published as long ago as 1779, while the tune known as 'New Britain' is traditional. Newton’s personal experience in being saved from a storm at sea inspired in him a spiritual conversion. He was ordained as a clergyman in 1764. Published in 1829, the familiar melody 'New Britain' is an amalgam of two previously existing tunes.

Now among the most popular of twentieth-century hymns, Be still, for the presence of the Lord has words—including many Bible references—and music by David Evans (b1957). Evans composed this hymn in his twenties.

Born in 1940 in Louisville, Kentucky, into a family of travelling gospel singers, Donna Adkins wrote the words and music of Father, we love you in 1976. The words are derived from John, Psalm 108 and Isaiah. This hymn first appeared inconspicuously in a little booklet used at a pastors’ conference, before its publication in 1981 in the collection Praise 5.

The hymn Make me a channel of your peace is based on words wrongly attributed to St Francis of Assisi. In fact the prayer’s first appearance, in 1912, seems to have been in the Paris magazine La Clochette. The South African-born Sebastian Temple (1928-1997) composed the well-known melody.

The chorale melody O sacred head, sore wounded (often known as the 'Passion Chorale') was written by Hans Leo Hassler (1564-1612), and harmonized by J S Bach (five times in his St Matthew Passion, but also in several other works). The text is by Paul Gerhardt. Originally Hassler composed the melody for a love-song, but it was subsequently adapted—firstly in 1613, to the words Herzlich tut mich verlangen ('I do desire dearly a blessed end') and then, in 1656, to Gerhardt’s O Haupt voll Blut und Wunden ('O sacred head, sore wounded').

The tune of Lift high the cross, known as 'Crucifer', was composed by Sidney Hugo Nicholson (1875-1947). The words, written by George Kitchen in 1887, while he was Dean of Winchester, and revised nearly thirty years later by Michael R Newbolt, are derived from many biblical sources.

The music and text of Lord Jesus Christ ('Living Lord') were written by the Anglican priest Patrick Appleford (1924-2018), who spent five years (1961-66) in Lusaka, Zambia as Dean and Rector of the Holy Cross Cathedral. In collaboration with Geoffrey Beaumont, Appleford intended accessibility above all, an aim which was often derided. 'Living Lord' has become one of the most universally popular of modern hymns.

The tune of Good Christians all ('Vulpius') is named after the composer Melchior Vulpius (c1570-1615). The text, written by Cyril A Alington while he was Headmaster of Eton College, was published in 1931 in Songs of Praise.

The original words of The God of Abraham praise are attributed to the fourteenth-century poet Daniel ben Judah. After hearing Cantor Meyer Lyon sing these verses to the Hebrew melody 'Yigdal' in The Great Synagogue in London, the Welsh Methodist preacher Thomas Olivers (who worked with John Wesley) paraphrased the text for Christian use in 1770. He named the tune 'Leoni' after Lyon.

John Ellerton’s hymn The day thou gavest, Lord, is ended was set to music—the tune known as 'St Clement'—by the Reverend Clement Scholefield (1839-1904), or so it is believed. However, as the melody is far superior to Scholefield’s other forty-one hymn-tunes, it has been claimed that his good friend Sir Arthur Sullivan must have helped significantly.

Abide with me has words by Henry Francis Lyte and a tune ('Eventide') by William Henry Monk. It is among the most widely known of all hymns, being sung at grand sporting events including the FA and Rugby League Cup Finals, the 2012 Summer Olympics opening ceremony, as well as featuring in numerous films, TV series and books.

Dorothy F Gurney wrote the hymn text O perfect love for her sister’s wedding in 1883. A few years later the words were set to music in an anthem by Joseph Barnby (1838-96), but this was shortened into a hymn-tune for publication in 1890.

Scored for children’s voices, the setting of The Lord is my shepherd recorded here is the fourth movement of the Te Deum (2009) by Will Todd (b1970), a work commissioned by the Vivace Chorus. Among Todd’s most popular compositions is his Mass in Blue, which is influenced by his work as a jazz pianist.

When I survey the wondrous cross has words by the great hymn-writer Isaac Watts. The well-known tune 'Rockingham' was composed by Edward Miller (1731-1807). The prolific Watts (1664-1748) is credited with seven-hundred-and-fifty hymn texts, many of which are regarded as classics today. Perhaps less well known is Watts’s book on logic, which became the standard textbook at Oxford, Cambridge, Harvard and Yale, being used at Oxford for well over a hundred years.

Alleluya, sing to Jesus has a text by W Chatterton Dix, while the tune known as 'Hyfrydol' was composed by Rowland H Prichard (1811-1887) when he was only nineteen years old.

The text and music of I am the bread of life were written by Sister Suzanne Toolan, born in Lansing, Michigan in 1927. She wrote this hymn in 1964 during her high-school teaching career. Having torn it up, she was encouraged by a girl pupil to rescue it from the wastepaper basket.

Best known for his setting of Blake’s Jerusalem, the Bournemouth-born Hubert Parry (1848-1918) wrote a substantial amount of church music. O praise ye the Lord ('Laudate Dominum') comes from his anthem: Hear my words, ye people, for chorus and orchestra. Adapted from Psalms 148 and 150, the words are by Henry Williams Baker.

Based on a prayer of St Francis of Assisi, the words of All creatures of our God and King were written by William Henry Draper early in the twentieth century, but the popular melody 'Lasst uns erfreuen' is much older. This German Easter hymn-tune dates from 1623, when it was published by Friedrich Spee as part of a collection of church music. The tune became widespread in English hymn books when Vaughan Williams made his arrangement in 1906.