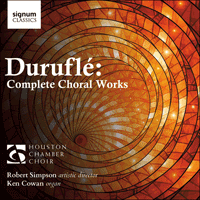 A debut Signum recording from the Houston Chamber Choir presents the complete choral output of Maurice Duruflé, compositions as carefully crafted as they are infused with the Gregorian traditions of the distant French past to which their composer aspired.

Maurice Duruflé’s worldwide fame rests upon his reputation as a brilliant organist and the composer of a handful of finely crafted works, notably his widely performed setting of the Requiem. In his methods, he followed the habits of his teacher, Paul Dukas, constantly refining and polishing what little music he wrote.

The choral ensemble is streamlined to very simple dimensions: a unison ensemble of baritone voices, with a baritone soloist featured in various sections of the work. In that solo/choral arrangement, it simulates the monastic practice of alternately singing phrases or verses of Gregorian chant antiphonally in two groups, or responsorially by a cantor alternating with a larger chorus.

The three-part 'Kyrie eleison' is sung quietly by the full chorus, with a running figure in the organ part that periodically imitates the beginnings or endings of vocal phrases during interludes between them. The 'Gloria' is a much bolder piece, beginning with a forceful introduction by the organ and full-throated singing by the male chorus throughout the divine praises. After a quiet moment during the 'Gratias agimus tibi', the first section rises to a climactic ending, then quickly gives way to a quiet set of running notes that introduce the central petitions sung by the soloist. These pleas for mercy are underscored by subtle melodic imitations between the vocal line and the organ. An animated tempo accompanies the closing section, climaxed by a much-repeated choral 'Amen'.

The final three movements gently lead the listener deeper and deeper into complex tonal implications. Given the bright Lydian-mode scale patterns of the 'Sanctus' and 'Agnus Dei' plainchants, it is surprising to find Duruflé moving its melodic phrases to higher or lower tonal areas, while harmonizing them with unrelated chordal sequences in the organ part. The jubilant text of the 'Sanctus' movement is also delivered at a subdued volume level, rising to its loudest choral singing only in the climactic 'Hosanna's toward the end.

The 'Benedictus' is sung by the soloist, and the complex harmonies of the thrice-repeated 'Agnus Dei' are gently intoned by the chorus in the midst of ever-softer, ever-more-relaxed organ interludes, ultimately resolving themselves in the final chord.

Quatre motets sur des thèmes grégoriens Op 10 (1960)
Duruflé dedicated these four short motets to Auguste Le Guennant, the director of the Gregorian Institute in Paris. All four of them are based on melodies from the Benedictine monastery of Solesmes, which issued the official, most widely recognized edition of Gregorian chant. The texts for the first three motets are antiphons taken from the liturgies of the mass or Vesper services, while the closing 'Tantum ergo' is from the hymn, 'Pange lingua gloriosa', set to a text originally composed by St Thomas Aquinas for the Feast of Corpus Christi.

'Ubi caritas', an antiphon taken from the Mass for Maundy Thursday, begins and ends with only the darker choral sound of the altos, tenors and basses. Each phrase of the text is repeated and the altos alternate singing them in two separate choirs. The tenors are subdivided into two voice parts in order to maintain four-part chordal harmony. After the sopranos enter for the exultant central section, the harmonic structure increases to five parts.

'Tota pulchra es' employs the texts of three antiphons from the Second Vespers for the Feast of the Immaculate Conception. The opening text alternates as a refrain between the other two verses, forming a five-section ABACA structure. It is set in three voice parts for subdivided sopranos and undivided altos, with an occasional expansion to four female voice parts. In contrast to the strict chordal harmony of 'Ubi caritas', this motet blends contrapuntal and chordal styles.

The short text for 'Tu es Petrus' is taken from the gospel of St Matthew, as used in the final antiphon of the First Vespers for the Feast of the Holy Apostles, Peter and Paul. The plainchant melody is set polyphonically for all four voice parts and the music rises to its most forceful climax at the very end of the motet.

Notre Père Op 14 (1978)
Duruflé’s unaccompanied four-voice setting of The Lord’s Prayer is his only sacred choral work in the vernacular French language. It was originally set in a simple chordal style, with a later arrangement by his wife for unison congregational singing, with an organ accompaniment.

Requiem Op 9 (1947)
Duruflé completed his Requiem in 1947, issuing its original version for soloists, chorus, full orchestra and organ. Later, he reduced the instrumental part for organ alone, as heard on this recording. In 1961 he arranged a third version employing a small orchestra and organ.

The consoling spirit of the work and its Latin text closely follow the Requiem of Gabriel Fauré, omitting the tract and the terrifying sequence, 'Dies Irae'. Like Fauré, Duruflé also set the two prayers belonging to the burial service following the mass, 'Libera me, Domine' and 'In paradisum'.

Its nine movements begin with the traditional plainchant Introit melody, 'Requiem aeternum', sung quietly in unison by the men over a running organ accompaniment with intervening wordless vocalises from the women. Sopranos and altos alternate on the central psalm verse, then repeat the opening text in a free chorale setting, gradually supported by the tenors and basses. The plainchant 'Kyrie' melody is polyphonically adapted for the four voices over a long-note 'cantus firmus' version of the melody stated on the trumpet stop.

The Offertory prayer, 'Domine Jesu Christe', is given a more elaborate dramatic setting, with little organ meditations on the opening phrase of its chant surrounding the vocal verses. The chorus rises to urgent declamatory pleas for divine mercy; then the women and eventually the baritone soloist utter quieter, more lyrical prayers asking eternal life for the deceased. The 'Sanctus' and 'Benedictus' plainchants are harmonized quietly for a three-part women’s chorus over a running organ accompaniment, with the men joining in for an exultant 'Hosanna' at the center of the movement. The mezzo-soprano soloist utters a simple but quite heartfelt plea for eternal rest in the 'Pie Jesu', with an accompanying melody by a solo cello.

In contrast to most of the preceding movements, words or phrases in the text are repeated extensively during the 'Agnus Dei'. The sopranos and tenors alternate in unison statements of the first two invocations, with an instrumental melody accompanying the vocal chant, as in the preceding movement. Gradually, the other voices join in, bringing the movement to a rich four-part choral finale. The Communion prayer, 'Lux aeterna', makes use of instrumental preludes and interludes, and wordless vocal harmonies under the chant in the soprano line. Its concluding 'Requiem aeternam' verse is sung to a straight psalm tone by the altos and basses, and then the last three lines of the text are reiterated in a brief but peaceful codetta.

Momentary terror of divine punishment overwhelms the 'Libera me, Domine' as the chorus proceeds to the prayers at the burial service. But calm is restored as the sopranos intone its soft, consoling 'Requiem aeternam' text at the centre of the movement. The initial fear is modified by a quiet sense of hope as the chorus repeats the 'Libera me' antiphon in a four-part choral setting.

The entire work is laid gently to rest during the closing 'In Paradisum' intoned in a serene unison soprano melody over a diaphanous organ setting and completed by the choir, which gradually subdivides into seven voice parts as its settles upon the final cadence.