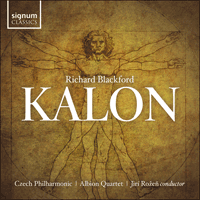 Kalon is a new work which explores the use of polytempo in the context of extended tonality and modality—at times surpassing the complexity posed by such serialist works as Stockhausen’s Gruppen or Carré.

Kalon is the Greek word for perfect physical and moral beauty, as conceived by the philosophers of Classical Greece. The three movements explore different aspects of kalon, also the context in which beauty can exist in ugliness and darkness.

I Lyra In 1994 I recorded an old man playing a three-stringed Cretan lyra in Athens during the filming of Tony Harrison’s Channel 4 film-poem A Maybe Day in Kazakhstan, for which I composed the score. In the first movement of Kalon I transcribed the simple ostinato pattern, changed the metre slightly and incorporated a fast, dance-like drone motif with its exuberant mordant decorations.

At the beginning of Kalon the string quartet thus becomes a four-part 'super-lyra', featuring open strings and fifths like its Cretan model. The overall structure is ternary, with two fast sections based on the lyra motif flanking a slower, more lyrical section. The entire movement is based around the lyra motif, but it undergoes melodic extensions, augmentation, intervallic and rhythmic changes in every section of the movement.

II Beklemmt The title 'Beklemmt' refers to the eight-bar passage in the Cavatina movement of Beethoven’s String Quartet No 13 Op 130. In that section the first violin becomes disassociated from the rest of the quartet, its line is disjointed, syncopated, almost as if the 'oppressed, stifled, anguished' melody of its title has become lost, almost in another world, another tempo. At eleven minutes duration, this movement is by far the longest and most dramatic of the three. I had heard from a Holocaust survivor that Jewish string quartets in Nazi concentration camps were forced to play some of the most sublime music ever conceived (Mozart, Haydn, Beethoven), whilst a few yards away the most barbaric atrocities were being perpetrated. In this context Kalon, the embodiment of beauty, becomes a fragile, flickering flame surrounded by unfathomable darkness. The attempts of the quartet to survive in a hostile environment lie at the heart of the music of this movement. The string quartet is consistently at variance with the string orchestra, the tempi are never synchronised and the two ensembles consistently either interrupt or obliterate each other. The progression of the string quartet is one of ever-decreasing tempi until it reaches the first of two quotations from the Beethoven Cavatina. The string orchestra material, by contrast, is constructed in symmetrical sections based on tempo relationships of duple to triple time. In contrast to the first movement, the two ensembles here present sustained sections individually, rather than in combination. Unlike the first movement, the opposing tempi are deployed to create conflict and dissonance.

III Stile concitato Claudio Monteverdi coined the term 'stile concitato' in the preface to his Eighth Book of Madrigals, published in 1638. He describes it as 'repeated sixteenth notes in the strings, basso continuo and voice', a practise also deployed by him in 1624 with the opera Il combatimento di Tancredi e Clorinda. The mood of concitato is of agitation, even warlike sentiment, and is contrasted with what Monteverdi termed 'molle', or music that is soft, gentle and soothing. At the climax of the movement the two groups appear to be united in tempo, the repeated sixteenth notes now dominating the whole texture with syncopations of increasing complexity. In the final bars the tempi are once again split and the string orchestra punctuates the concitato quartet with unrelated accented chords. Both groups come together in tempo and affirmative rhythmic unison for the final two bars.

When we recorded Kalon with the Czech Philharmonic and Albion String Quartet in 2018, both groups were rehearsed separately, so that when they came together each group would be confident with its own material. My fears that one group would be distracted by the alien tempo of the other were quickly allayed after Jiří Rožeň made it clear to the players in which sections they were to work as an ensemble in tempo unison and in which sections, those in multiple tempi, they must on no account listen to the other. In practise this unusual challenge for the performers gave their playing a thrilling edge that I hope is evident in the recording. I first heard Kalon played in its entirety at its premiere at the Cheltenham Music Festival on 7 July 2018 with string quartet and string orchestra from the BBC National Orchestra of Wales, conducted by Martyn Brabbins.

Kalon is one of the major outcomes of a recent period of intensive study by Richard Blackford for his doctorate at the University of Bristol that investigates aspects of polytempo and seeks to apply his findings in a range of musical contexts. What makes Kalon unusual is that polytempo is explored in the context of extended tonality and modality. This brings special challenges of harmonic and linear perception which, it may be argued, serially based works using polytempo (for example, works like Stockhausen’s Gruppen or Carré) do not fully address.

Aside from the sheer ingenuity and virtuosity of the technical construction, Kalon has considerable impact at the emotional level. This exploration of the concept of physical and moral beauty also embraces its opposite, as it must if it is to be a complete artistic statement that extends beyond the merely superficial. In its unflinching central reference to the perversion of great art in the extermination camps of the Holocaust, Blackford is also confronting his own family history, one side of his family having been almost completely wiped out during that abomination. It speaks to Blackford’s great musical integrity that he chose not to speak of his personal aspect to the work at the time of the premiere, preferring instead for the music to speak on its own terms.

Kalon is a work that deserves a regular place in the repertoire, for it combines intellectual rigour and innovation with direct emotional communication. In appealing to the mind, it speaks directly to the heart.