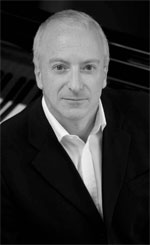 born: 13 January 1954
country: United Kingdom
Richard Blackford studied at the Royal College of Music London, where he was awarded the Tagore Gold Medal, then in Italy with Hans Werner Henze. He was subsequently first Composer-in-Residence at Balliol College Oxford and later Composer-in-Residence at the Brno Philharmonic. His music, which includes three operas, two ballets and many works for orchestra, chorus and chamber ensembles, has been performed and broadcast all over the world and has been recorded on Sony Classical, Warner Classics, Decca, Signum and Nimbus labels. His music has been performed and recorded by BBC Symphony Orchestra, Czech Philharmonic, Brno Philharmomic, BBC National Orchestra of Wales, Bournemouth Symphony Orchestra and Chorus, Munich Philharmonic, Philharmonia and the RPO. In 2000 his four-hour choral and orchestral score for CNN/BBC Millennium won an Emmy Award for Best Title Sequence and for which Richard was nominated for Outstanding Achievement in Music. His three critically acclaimed choral works Mirror of perfection, Voices of exile and Not in our time were all subjects of television documentaries and have been frequently broadcast and performed around the world. In July 2015 Richard was awarded Die Goldene Deutschland for services to music in Germany.