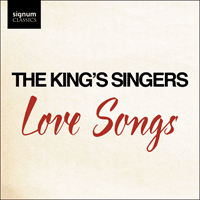 Nineteen classics from The King's Singers' more recent back catalogue, all of them devoted to the timeless theme of love.

‘This appealing collection of love songs is an apt celebration, plucking tracks from five different albums by the group recorded during the last ten years … beautifully performed and with an appealing blend of popular hits and more unusual fare, this disc makes for an uplifting listen’ (BBC Music Magazine)

Looking back from today to the very earliest records that we have of sung music, love has provided a more constant theme for composers and songwriters than any any other. From choruses in Greek tragedy to the oral traditions of folksongs from all over the world, from opera to musical theatre, from parlour music to cabaret, and from the recital stage all the way to the Top 40, love is everywhere and we can’t escape it.

So it’s no surprise that The King’s Singers have recorded a huge number of love songs on all kinds of albums over the last fifty years. Some of these were albums devoted to love songs, like Chanson d’amour and Romance du soir. Other albums couldn’t help but include music about love, although their theme was actually a different one: like Landscape & Time, How fair thou art, Good vibrations, and even Kid’s stuff. This album, Love Songs, is our chance to revisit some of our favourite tracks that we’ve recorded over the last two decades, compiled from across our back catalogue with Signum Records. The 19 tracks we’ve chosen come from five different albums: Simple Gifts (2008), Swimming over London (2010); Great American Songbook (2013); Postcards (2014); and our 50th anniversary three-disc album Gold (2017).

These were recorded over 10 years between 2007 and 2017, involving eleven different King’s Singers (David, Pat, Robin, Tim, Paul, Jules, Phil, Chris B, Chris G, Steve and Johnny) in four different line-ups. Rather than trying to take in any of the enormous number of classical love songs from our back catalogue, we wanted to focus on some of the best folk songs, jazz standards and pop songs that have featured in King’s Singers concerts throughout our history. This selection has been curated especially to celebrate some of our favourite recent albums, and to show how rich and varied the tapestry of love songs we have today is. We really hope these love songs speak to you as much with you as they do to us.