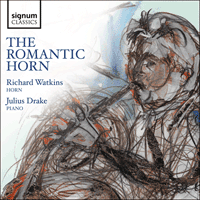 Richard Watkins is one of the most sought-after horn players of his generation. Here, with pianist Julius Drake, he curates and performs a programme highlighting the lyrical gems of the European repertoire.

This recording represents a selection of some of the most well-loved works for the horn. As our repertoire is relatively small, it seemed an ideal opportunity to select a programme of music from most European countries. The romantic horn was a fairly obvious title, given that all the works highlight the lyrical side of the horn—which is, essentially, what the instrument does best. I have always had a soft spot for Hunter’s moon—Gilbert Vinter being a leading figure in the light music movement, at its height in the 40s and 50s, but sadly now out of fashion. Finally, this project was the perfect opportunity to celebrate my collaboration over many years with Julius Drake, my friend and colleague with whom it has been the greatest privilege and honour to work.

Beethoven’s Sonata, Op 17, was first performed on 18 April 1800 in Vienna, with the virtuoso horn player Giovannni Punto and Beethoven as the pianist. This piece is typical of Beethoven’s sonatas in that it could easily be described as a piano sonata with a horn obligato. Allegedly Beethoven had first arrived in Vienna and was rather bemused to see a billboard for a concert the following day to include a new sonata for horn and piano. As he had no time, he quickly wrote out a horn part for Punto and improvised the piano part himself. At the performance the piece was rapturously received, so much so that the audience demanded a repeat performance!

Franz Strauss was a renowned horn player in the Bavarian Court Orchestra under the conductor Hans von Bülow. By all accounts, Franz Strauss was quite a character with von Bülow describing him as the ‘Joachim of the Horn’ and also commented ‘the fellow is intolerable but when he blows his horn, you can’t be angry with him’. Wagner agreed with von Bülow: ‘Strauss is an unbearable curmudgeonly fellow but when he plays the horn, one can say nothing, for it is so beautiful.’ As father to Richard Strauss, he was an equally capable composer in his own right. This Nocturno, Op 7, was published in 1904; it is a beautiful lyrical work which has become a staple part of the horn repertoire.

It is perhaps no surprise that Richard Strauss’s writing for the horn represents some of the most idiomatic and challenging music for the instrument. Apart from his two celebrated concertos, Strauss’s tone poems and operas all heavily feature the horn. This short and beautiful Andante was written in 1888 to mark his parents’ silver wedding anniversary.

Schumann’s Adagio and Allegro, Op 70, was composed in 1849, which the composer described as ‘my most fruitful year’. He had been influenced and inspired by the virtuoso horn player Joseph Lewry. The horn was undergoing a radical transformation with the recent invention of the valve, making the instrument fully chromatic. Although some composers, notably Brahms, were wary of this new-fangled device, Schumann was quick to exploit the advances the valved horn afforded him. As well as the Adagio and Allegro, Schumann also wrote the Konzertstück for four horns and orchestra and a deliciously rich Andante and variation for the unusual combination of horn, two cellos and two pianos. The Adagio and Allegro is a hugely dramatic piece exploiting the range and stamina of the player—there are only seven bars rest in the horn part. It is generally regarded as one of Schumann’s lovelier chamber music works, so much so that other versions exist for cello, violin and viola.

Alexander Glazunov’s Rêverie, Op 24, published in 1890, is a much-loved work amongst horn players. It is a short, dreamy piece exploiting the lyrical side of the instrument. In fact Glazunov studied the horn, in addition to the piano, violin, cello, clarinet, trumpet and trombone! I recently heard an anecdote involving the great British horn player Anthony Halstead, which I think encapsulates the piece perfectly; when the LSO went on their great tour of Russia with André Previn, the horn sections of the LSO and Leningrad Philharmonic ended up in the apartment of Vitaly Bujanovsky, the orchestra’s legendary Principal Horn. The English didn’t speak a word of Russian, nor did the Russians speak any English. Bujanovsky picked up his horn and said one word to Tony, also an accomplished pianist: ‘Glazunov’. No music of course but it was obvious what he had in mind. Tony played those great chords of D flat major and off they went! At the end the combined sections of both orchestras were in tears.

Scriabin is most well known for his exquisite and lush piano writing, yet this Romance, probably written at a young age, is a simple yet charming chamber music work. It was not published during Scriabin’s lifetime. Although not challenging technically, it is a beautiful piece and unmistakably Scriabin.

Brass players are indebted to French composers who wrote much of their music as test pieces highlighting all aspects of the instrument’s techniques. This lovely piece, Villanelle by Paul Dukas, is, in my opinion, one of the very best of its kind. It was written in 1906 for the Paris Conservatoire. At its core is the beautiful opening melody to test the lyrical side of the horn—this also has the option of being played using the natural harmonics. The rest of the piece follows the usual pattern of more nimble writing followed by a ‘stopped’ passage where Dukas instructs the player to transpose a semitone higher. This gives the sound a unique and ethereal quality which Dukas also used in his Sorcerer’s Apprentice. Villanelle then explores the muted sounds and ends virtuosically. We are very fortunate to have this piece in our repertoire as Dukas destroyed much of his music and it is a great favourite amongst horn players.

Poulenc’s powerful Élégie was written in memory of the great horn player Dennis Brain, who was tragically killed in a car crash in 1957. It also holds particular significance for Julius and myself as we performed this piece as part of our Wigmore Hall début together. I remember once playing the Élégie at a horn event in Sweden and introduced the piece suggesting the music almost depicted the life of Dennis Brain. After my performance, I was followed by the great French player, Michel Garcin-Marrou, who said he enjoyed my charming little story but explained he would have to tell the truth behind the Élégie! After Brain’s untimely death, Poulenc’s publisher was continually trying to persuade him to write a piece in Brain’s memory. As he admitted, not knowing much of the instrument’s capability, Poulenc phoned Georges Barboteu, the Principal Horn of the Orchestre de Paris and invited him to his apartment to discuss writing the piece. However, they discovered they both had a penchant for fine Chablis so in the end they drank several bottles of wine together and then Poulenc wrote the piece! It is an intensely moving work and to quote my teacher, Ifor James, ‘as long as the horn is played, Dennis Brain will always be remembered.’

Gilbert Vinter wrote Hunter’s moon for the horn player John Burden when they were both posted to Torquay in 1942. It was first performed with the local Torquay Municipal Orchestra but an arrangement for horn and piano was made later the same year. It also became a ‘party’ piece for Dennis Brain towards the end of his life. Originally titled Diana of the chase, the piece certainly has many hunting connotations. Perhaps the opening marking, ‘Allegro (with good humour)’ sets up the tone for the rest of the piece. There are loud ‘stopped’ notes and upward glissandi, perhaps suggesting hiccoughing and burping of our hero huntsman who then falls asleep represented by a lovely dreamy theme first on the horn then on the piano. The catchy 6/8 theme returns before ending in a blaze of glory. All this, of course, suggests a connection between our hero horn player and rather too much alcohol. Vinter and John Burden always insisted this piece represented the full moon after the harvest moon, yet the fact that there was a pub in Torquay called ‘Hunter’s moon’ perhaps gives the game away! This is a brilliant example of light music and an exuberant way to end this recital.