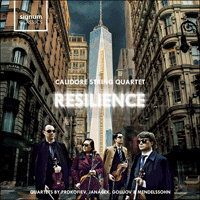 The Calidore String Quartet makes its Signum debut with a programme of four string quartets, by Janáček, Prokofiev, Golijov and Mendelssohn, each work representing for the performers something of the best of the human spirit as their composers attempt to transcend personal grief or geo-political destruction.

The genesis for our album Resilience was conceived during the tumultuous period leading up to and following the US presidential election of Fall 2016. Many millions across the world marched for a cause to address the divided nature of our society. These demonstrations led our quartet to wonder about our purpose as musicians during this time of social upheaval. We settled on the idea that we wanted to offer a message of strength and hope for our audiences across the globe. Furthermore, we wanted to demonstrate through our music that the power to be resilient is inside each of us. With this in mind we began to explore the quartet canon to extract stories of composers who endeavored to create great art despite tremendous internal or external conflict. The result is a collection of four personal narratives as told through the medium of the string quartet by Prokofiev, Janáček, Golijov, and Mendelssohn. These pieces depict an escape from the Nazi eastern offensive in WWII, a life caught in the crosshairs of violence in the Middle East, the struggle of a man trapped in a loveless marriage and a heartbroken brother reeling after his sister’s premature death. In some of the most difficult times of their lives these composers turned to music to vent anger and fear but also to express tenderness, hope, and optimism.

Sergei Prokofiev’s String Quartet No 2, Op 92, was conceived during wartime. When the German Army approached Moscow in 1941, Soviet officials evacuated Prokofiev and other prominent artists out of the city. Prokofiev was relocated to the southern Soviet region of the Kabardino-Balkar Republic where he became fascinated with the local music and folk instruments. During this period Prokofiev began composing his second string quartet. He poured the exotic folk-songs, dance rhythms and harmonies of the region into the classical mold of the string quartet. It seemed that his time as a war refugee spurred his fertile imagination. Incredibly within a short period, he produced a rich volume of additional works including his opera War and Peace and the seventh piano sonata.

In a letter to his love interest Kamila Stösslová, Leoš Janáček writes: 'I was imagining a poor woman, tormented and run down, just like the one the Russian writer Tolstoy describes in his Kreutzer Sonata.' Janáček identified with Leo Tolstoy’s novella The Kreutzer Sonata because like the story’s characters, he too was trapped in a loveless marriage and was hopelessly enamored with Kamila Stösslová, a married woman decades younger. The combination of his unhappy union and his unrequited love compelled Janáček to pour out his feelings into his String Quartet No 1, aptly titled the 'Kreutzer Sonata'. The quartet follows the narrative of Tolstoy’s novella which tells the story of a jealous husband who is driven into madness, convinced of his wife’s infidelity. The husband ultimately succumbs to his paranoia and murders his wife. Janáček shows the full spectrum of the story’s emotions from the sweetness of love to violent rage throughout this string quartet. He utilizes lush textures and harmonies and contrasts it with aggressive strokes, provocative dissonance as well as other techniques that stretch the instruments to their limits, evoking Tolstoy’s protagonists’ descent into madness.

Osvaldo Golijov’s Tenebrae juxtaposes the brutality of war with the innocence and hope of youth. Tenebrae was composed in 2000 and was inspired by two contrasting events in the composer’s life during that year. The first event was a visit to Israel where the Argentinian-Israeli composer found himself amidst a new wave of violence in the Middle East. Only a week later, he visited the New York City planetarium with his five-year-old son who for the first time viewed the earth as a small blue dot orbiting amidst the stars of the cosmos. The inner section of his Tenebrae conveys the aggression and brutality he witnessed in Israel. But the meditative outer movements serve as the antidote. The serene music which opens and closes Tenebrae describes the innocence of his son’s awe which he observed inside the tranquil atmosphere of the planetarium. Golijov writes that the music is intended to be listened to from different perspectives. If one listens from afar the music portrays a serene texture. But if listened to closely, there are tense undercurrents evoking the pain of the ongoing war in the Middle East.

The story behind String Quartet No 6, Op 80, by Felix Mendelssohn doesn’t hide behind any fictional tale. In 1847, Felix Mendelssohn was overwhelmed with grief after he lost his closest friend, collaborator and sister Fanny Mendelssohn to a sudden fatal stroke. Upon learning of her death he reportedly shrieked and collapsed to the floor. His last string quartet, his Op 80, has no resemblance to any of his previous works. Instead of the lightness of his famous scherzi, we find a work that is unrelentingly angry and at times brutal. He infused the first and second movements with pain and frustration through repeated accentuations, furious tempos and the dark and gloomy key of F minor. Furthermore, the drama of Beethoven’s own string quartets and the contrapuntal texture of Bach are clear influences in these movements. After two tumultuous movements, the third is a reprieve from the onslaught of grief. It is a nostalgic episode where Mendelssohn reflects on his love for his sister with tender and graceful figures. The primary theme is a sorrowful but sweet melody that is reminiscent of his Songs Without Words. A hushed peaceful chord concludes the movement but Mendelssohn’s anguish returns in the finale. The conclusion of the Op 80 is one of the most virtuosic in the repertoire. The final coda moves with breathtaking speed and force and solidifies this work’s stature as one of the most celebrated quartets ever written.

Prokofiev, Janáček, Golijov and Mendelssohn found the strength to compose music in some of the most difficult moments of their lives. These works are imbued with such emotional potency that they are still revered decades and even centuries after their creation. We hope that our performances of their quartets can inspire resilience in listeners during challenging times.