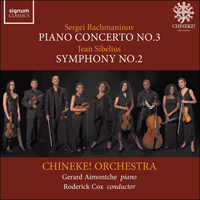 Drawn from exceptional musicians from across Europe, the Chineke! Orchestra is part of the Chineke! Foundation whose motto is ‘championing change and celebrating diversity in classical music’. In this live concert recording under conductor Roderick Cox they perform two popular works by Sibelius and Rachmaninov.

‘[Chineke! Orchestra] are certainly on their way to showing that they can be considered on a par with any non-Black and Minority Ethnic (BME) orchestra. Since their previous recording … they have clearly improved greatly on their ensemble playing and overall presence. And they still radiate dedication and energy’ (Gramophone)
‘The notorious difficulties of the solo writing seem to present no problem to the agile and sonorous pianism of the young Russian virtuoso Gerard Aimontche, while the American conductor Roderick Cox unfolds Rachmaninov’s leisurely and discursive continuities with a firm hand. Cox also offers a forthright performance of the Sibelius. His must be among the most electrifying accounts in the catalogue of its strange dramatic scene of a second movement … an encouraging marker of an orchestra on the rise’ (BBC Music Magazine)

Sergei Rachmaninov Piano Concerto No 3 in D minor Op 30
An anxious and melancholic individual by nature, Sergei Rachmaninov rose above his personal issues at a young age to become one of the giants of the Western classical canon. Yet there was nothing inevitable about Rachmaninov’s meteoric rise. In fact, it nearly did not happen at all.

From a young age, Rachmaninov had been marked out as a prodigy. At the tender age of nine he was admitted to study at the St Petersburg Conservatory. By the time he was fourteen he had written his first full piece for orchestra. Aged twenty, he had finished a piano concerto and an opera, Aleko, which premiered, with enormous success, at the Bolshoi Theatre. Expectations were high for the young Rachmaninov, and there was great anticipation amongst concertgoers when it was announced that he was in the process of writing his very first symphony.

However when the work finally premiered in 1897, after two years of gestation, it was greeted neither with praise, nor even with apathy, but with abject revulsion. Prominent critic César Cui even described it as suitable only for ‘the inhabitants of Hell’. While the modern consensus is that the work is sprawling and unfocused, the disaster of the premiere was undoubtedly exacerbated by the conductor, Alexander Glazunov. Glazunov, a fellow composer who was famed as much for his drinking habit as for his compositions, supposedly barely glanced at the score before he took to the stage, blind drunk, to conduct it.

The result was not pretty: Classical concertgoers in those days were not known for withholding their displeasure, and at some point during the performance Rachmaninov retreated backstage before fleeing the building altogether.

After a glittering start to his career, the failure of the Symphony No 1 crushed Rachmaninov. He left the city, retreating to the seclusion of the countryside, and for three whole years composed nothing. Although he still performed during this period, going so far as to undertake a concert tour in the UK, he found himself completely unable to produce any new works. As time went on, he lapsed into despondency, depression and alcoholism. Friends and family tried various remedies, including one disastrous visit to the celebrated novelist Leo Tolstoy at the recommendation of bassist Fyodor Chaliapin (after Chaliapin performed one of Rachmaninov’s songs for Tolstoy, the great writer wasted no time in telling the composer how much he disliked it).

Eventually, Rachmaninov was brought to Dr Nikolai Dahl, a highly regarded hypnotist and doctor of internal medicine, who embarked on a programme of positive reinforcement and hypnosis, willing Rachmaninov to begin work on a long-promised piano concerto, and encouraging him to have confidence in his abilities. Amazingly (perhaps most of all to Rachmaninov himself, who set no store by such treatment), it worked. Later, he would write: ‘Incredible as it may sound, this cure really helped me’.

Whilst the resulting Piano Concerto No 2 would put Rachmaninov’s career back on track, his Piano Concerto No 3—composed a little over eight years later—would firmly secure his compositional reputation. Renowned as one of the most technically daunting concertos in the repertory, the ‘Rach 3’ is a work that many pianists aspire to perform. Rachmaninov maintained that this concerto was 'more comfortable' to play than the second, although this is perhaps of little comfort to any performer lacking the composer’s phenomenal hand span and seemingly limitless stamina. It was even out of reach for the great Josef Hofmann, admired by Rachmaninov above all other pianists and to whom he dedicated the work. Hofmann had considerably smaller hands and, as a result, never performed the concerto which bears his name.

Rachmaninov denied any specific thematic influences within the piece. 'It is borrowed neither from folk song nor from liturgical sources. It simply wrote itself', he stated about the primary melody, in which the pianist enters, subdued, underneath the orchestra. 'If I had any plan in composing this theme, I was thinking only of sound. I wanted to ‘sing’ the melody on the piano, as a singer would sing it—and to find a suitable orchestral accompaniment, or rather one that would not muffle this singing.' Although Rachmaninov may have sincerely believed the theme was his creation scholars have found strikingly similar music in Russian Orthodox monastic chants. The Intermezzo and Finale are played without pause, an abrupt transition from the reflective melancholy of the second movement to the ferocious virtuosity of the Finale.

Jean Sibelius Symphony No 2 in D major Op 43
The success of Jean Sibelius’s tone poem Finlandia led many, both in his homeland of Finland and internationally, to associate all of his music as being representative of something (usually Finland itself). But while the nationalistic source material of Finlandia was never in doubt, when it came to his symphonies, Sibelius was an avowed absolutist. He never sought, nor desired anyone to see, anything except the pure music of these works.

Composed while Sibelius was travelling through Italy and central Europe, and coming hot on the heels of Finlandia, audiences and critics quickly attributed the character of the Symphony No 2 to the sun-drenched landscapes of southern Europe. Others still detected hints of nationalism in the work, with conductor Georg Schnéevoigt, a close friend of Sibelius, later claiming that the opening movement depicted the carefree pastoral life of the Finnish people before the coming of the ‘Great Enemy’ (Russia).

Sibelius conducted the premiere of the Symphony himself in Helsinki on 8 March 1902. It proved to be a hit, and by popular demand the program was repeated three more times that month, each time to a capacity audience.

In an article that appeared the day after the premiere, Finnish conductor Robert Kajanus described gave his own vivid interpretation of the final three movements:

The Andante strikes one as the most broken-hearted protest against all the injustice that threatens at the present time to deprive the sun of its light and our flowers of their scent … The scherzo gives a picture of frenetic preparation. Everyone piles his straw on the haystack, all fibres are strained and every second seems to last an hour. One senses in the contrasting trio section with its oboe motive in G flat major what is at stake. The finale develops toward a triumphant conclusion intended to rouse in the listener a picture of lighter and confident prospects for the future.

For Sibelius, however, the Symphony No 2, like all his other symphonies, was a medium through which to express the form and development of musical ideas and motifs. But while these works may not have been intended to reflect directly upon the real world, they each have a personality and character of its own. Like a person, each symphony was moulded by the context of its composition, influenced by, but not mirroring, the place and time of its creation, and the mood and circumstances of Sibelius’ himself.

The Symphony No 2 is characterised by its simple, folksong-like melodies—perhaps explaining Schnéevoigt’s interpretation of the work as representing the pastoral Finnish people—and unorthodox approach to thematic material: most symphonies introduce themes and motifs in full at the start of the work, then dissect and alter them throughout the course of the piece before finally returning to the basic themes at the end. Sibelius however uses the first movement of the Symphony No 2 to first present the listener with fragments of thematic material which he then builds into full themes before pulling them apart again.

The opening Allegretto is followed by a restless slow movement, characterised by moments of calm disrupted by forceful outbursts. For Schnéevoigt, this movement represented the incursion of Russian forces into the Finnish nation.

The third movement, a scherzo, opens with concerted energy, (the ‘great conflict’ with Russia for Schnéevoigt), which gradually forms a link to the bold, uplifting finale (‘the triumph of Finland’). The second subject of this concluding section is a sorrowful lament, which some believe to have been composed by Sibelius for his wife, in memory of the death of her sister.

Whilst the symphony may not have been composed to represent any specific theme or events, it is perhaps this very characteristic which has made it one of the composer’s most popular works, allowing Schnéevoigt and other listeners to project their own ideas and stories onto the music, keeping the piece fresh for each new generation.