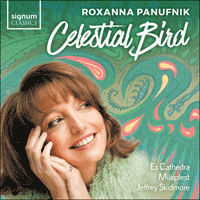 One of the UK’s most lauded composers, Roxanna Panufnik celebrates her 50th birthday with a new release of her previously unrecorded choral music, performed by leading British choir Ex Cathedra under Jeffrey Skidmore.

‘As the title-work—a luminous and enticing if understated setting of Jessica Powers—demonstrates, her writing for voices is always fluent and idiomatic … a pleasurable disc’ (Gramophone)
‘Celestial bird sets a mystical poem by Carmelite nun Jessica Powers with sumptuous harmonies that soar and sting, aptly showcasing Ex Cathedra's magnificent purity of sound … Child of Heaven … is elegantly shaped and full of warmth, rather like this disc as a whole’ (BBC Music Magazine)

This collection of choral music by Roxanna Panufnik emerges as the composer celebrates her fiftieth birthday in 2018. A half-century can be a crucial moment for any creative artist, a time to take stock and assess one’s identity, achievements and aims. And for Panufnik there is also plenty to celebrate: this recording is the latest in a series of landmark events, including the powerful impact of her ‘People’s Opera’ Silver Birch, premiered at Garsington in 2017 and shortlisted for an International Opera Award, and a choral commission for the Last Night of the Proms 2018.

While many listeners associate her with choral music, and with good reason—the genre accounts for around 70 per cent of her compositions—this output encompasses great variety, from ecstatic religious settings, such as the St Pancras Magnificat and Nunc dimittis or St Aidan’s Prayer, to the vivacious and the romantic (Since we parted), as well as influences from different musical traditions as diverse as South Asia (Unending love) and a hint of English and Celtic folksong (Celestial bird). This album, Panufnik reflects, is 'very personal, showing different sides of me and my music. There are many, and some that people haven’t necessarily seen before.'

Unending love, the most substantial work on the album, sets a poem by the Indian poet and polymath Rabindranath Tagore (1861-1941), a seminal figure in the mystically-inclined artistic circles, among others, of the early twentieth century. The piece was a response to a commission from the National Youth Choir, requesting a Tagore setting with accompaniment by the traditional South Asian ensemble Tarang—which includes the Indian violin, percussion and sitar, as well as a Carnatic singer. Panufnik based the work’s harmonies on Indian ragas: 'I was eager to explore a multitude of kaleidoscopic Indian modes and instruments,' she says, 'and I instantly fell in love with this colourful and passionate poem. I particularly wanted to use some of the original Bengali words, including those for ‘unending love’—Jonme jonme juge juge—which provided the rhythm for the entire last verse.' NYCGB requested 'a Bollywood ending'—and Panufnik says she was delighted to oblige.

The album’s title, Celestial bird, is from a setting of a mystical poem by Jessica Powers (1905-1988), who became a Carmelite nun in Wisconsin, but had Scottish and Irish ancestry; Panufnik says she discovered this fact only after imagining the music with Celtic influences. 'I have heard her described as an ‘artist, painting words’—which fits my overt style of word-painting in music,' Panufnik writes. The piece was composed originally for VOCES8 in thanks for their participation in another recording, and dates from 2013.

The setting of Salve regina is a tribute of a different kind: Panufnik wrote it for the 80th birthday of Dame Raphael, a Benedictine nun formerly based at an abbey which the composer used to visit on occasional retreats and who has remained an artistic and spiritual consultant ever since. 'A friend of hers sent me her favourite plainsong, which was the Salve regina,' says Panufnik. 'I’ve set it for unison women’s voices with piano accompaniment—in a very unplainsongy way.'

O hearken’s genesis was a little more surprising: it started life as a raffle ticket prize at Westminster Abbey Choir School’s Summer Fête in 2015. Panufnik had promised a fanfare, but the raffle winner, Pamela Carrington, persuaded her instead to write a new piece for the Westminster Abbey Choir and its director James O’Donnell. For the resulting Introit, says Panufnik, O’Donnell requested that it should be 'pithy' and celebratory. Panufnik’s young son, Benedict Macklow-Smith, is a chorister at the Abbey: 'It was the first time I’d heard my son sing my music,' she remembers. (He is not singing in this piece on the recording, but features later in the album.)

The St Pancras Magnificat and Nunc dimittis was commissioned by the London Festival of Contemporary Church Music and first performed by the Choir of St Pancras Church directed by Christopher Batchelor at the festival in 2014—therefore is named after that choir’s home base. Panufnik often assigns place names to her religious settings, following a pattern set with her breakthrough work, Westminster Mass.

Here the a cappella setting for six voices is both dramatic and colourful: 'It has myriad different textures and overlapping harmonies,' says Panufnik. 'There’s a lot going on: it’s full of energy and is very vivid.' At first she was nervous about writing it, she adds, since it was not long since she had previously set a 'Mag and Nunc' and her existing music kept surfacing when she looked at the text. 'A combination of advice from my ever-helpful Facebook friends and the fact that this was a cappella and in Latin (whereas the first one had been accompanied by organ and set mostly in English) helped, and soon I was flying,' she says.

Two works on the present album were commissioned by Ex Cathedra and Jeffrey Skidmore. The first is Since we parted, written in 2014 as part of the choir’s commemoration of the centenary of World War I. It is, says Panufnik, 'extremely romantic, more romantic than the music people might associate me with, and it’s for mixed voices and instrumentation of trumpet, harp, cello and piano.' The words mingle two different poems—a technique Panufnik increasingly likes to use. The first is ‘A Year and a Day’ by Kathleen Coates, included in Vera Brittain’s Testament of Youth: written between 1910 and 1913, it seems, says Panufnik, 'prophetic of the impending war in its depiction of a woman and man in love, reluctantly separated and missing each other'. Foil to this, as refrain, is ‘Since we parted, yestereve’ by the Victorian statesman and poet Robert Bulwer-Lytton. 'The whole piece is made up of my typical major-minor harmonic language which sets a bittersweet atmosphere,' Panufnik says. 'The trumpets remind us, from time to time, of the backdrop of war.'

Panufnik set William Blake’s A cradle song in fulfilment of a long-standing wish to write a Christmas carol in the style of a lullaby. Presented with this option by the Royal Choral Society, she says she 'leapt at it'. The piece was commissioned by the RCS 'in affectionate memory of their chairman, Anthony Forbes MBE', who sadly had died in 2017. 'Just as I was starting to compose, photos appeared of a friend’s newborn baby daughter, Daisy McNicholl, on Facebook. It brought home how the soothing nature of a lullaby is so important at every stage of the ‘circle of life’,' Panufnik explains.

Deus est caritas, too, was commissioned in 2017 in 'affectionate memory', this time by the lay clerk Marcus Carney for the choir of Peterborough Cathedral, in tribute to his late parents. 'Marcus asked for ‘profound joy’,' relates Panufnik. 'I hope I’ve managed to convey this with bright and vivacious harmonies and church peals.'

Panufnik’s chorister son, Benedict Macklow-Smith, is the treble soloist for St Aidan’s Prayer, which Panufnik wrote in 2016 as an 80th birthday gift for her godfather, the Polish artist Andrzej Dzierzyński. He lives part of the time in Italy and therefore Panufnik decided to set the words of St Aidan of Lindisfarne in both English and Italian. It was first performed by the choir of the Church of Our Most Holy Redeemer and St Thomas More, Chelsea, in December 2016. 'I’ll never forget Uncle Andrzej’s face when he saw Ben singing,' Panufnik says. 'This album is all the more personal because Ben is in it. In a few years his voice will have broken, so it is wonderful to have this as a permanent record.'

Finally, commissioned by Ex Cathedra for its ‘Summer Music by Candlelight’ concerts in 2018, Child of Heaven finds Panufnik revisiting the enticing world of Indian music. It forms part of the choir’s ongoing ‘Dawn Choruses’ series from various composers. The words are drawn from the ‘Hymns to Dawn’ in the Rig Veda (a collection of Indian Vedic Hymns, translated by Ralph T H Griffith [1826-1906]). 'The melodies emerge from overlapping Indian modes, sung by one half of the choir. The first of these is the mysterious Bhairavi mode, depicting barely half-light as hints of dawn emerge from the darkness,' says Panufnik. 'As light establishes we go onto the more ‘happy’ Kãfi mode …' The start of day is represented by the Purvi mode: 'mysterious but joyful,' as Panufnik says.

And perhaps 'mysterious but joyful' is also, in summary, a fine description of Panufnik’s musical voice. She expresses deep thanks to Ex Cathedra and Jeffrey Skidmore for their excellent performances herein: 'I’m thrilled that they have made this recording because I love working with them. They’re a brilliant choir, they make the most glorious sound and they are a lovely group who understand exactly what I and my music are all about.'