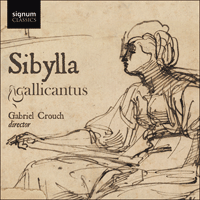 Orlande de Lassus’ much-vaunted Prophetiae Sibyllarum are here complemented by parallels from Hildegard of Bingen and Dmitri Tymoczko in powerful performances from Gallicantus.

In this age of modern technology and instant media we hardly have need of soothsayers and prophets, and since the colourful setting by Orlandus Lassus in his early output there has been a dearth of musical settings of the sayings of the sibyl. Yet in the 5th century BC, the Greek writer Heraclitus refers to ‘The sibyl, with frenzied mouth uttering things not to be laughed at, unadorned and unperfumed, yet reaches to a thousand years with her voice by aid of the god’. There appears to be some supernatural influence in the predictions of these female oracles, each given a name according to the location of their prophesies: Delphi, Tiburtina, Phrygia and so on.

The received wisdom in the Greek sources is that the sibyls relayed their message in song—and this might have served as an inspiration for composers, although the take-up of the invitation has been disappointing. By medieval times, the Latin term 'sibylla' had taken on the generalized meaning of ‘prophetess’ with perhaps less of the pagan connotation, and a stronger association with the prophecies of the Old Testament. It is certainly plausible that Lassus had already seen the representation of five sibyls in the Sistine Chapel, and maybe other examples in Italy. The very presence of these images in the Borgia apartments of the Vatican is a hint that folklore, and even blatant myth, could coexist beside the official doctrine of the Church. Shakespeare includes references to sibyls in Othello, Titus Andronicus, The Merchant of Venice and Troilus and Cressida. This last play was reincarnated in operatic form by William Walton in 1954, and Berlioz’s treatment of Cassandra in The Trojans (1858) casts her clearly in the mould of a sibyl without too much embroidery. Yet it was a long time prior to these adoptions into art and literature that Christ was referred to as: ‘He, whom seer and sibyl sang in ages long gone by’ (Prudentius, 4th Century AD).

Carmina chromatico, the title of Lassus’s introductory section, is a phrase which on its own might suggest music with lots of chromatic writing as we define it with our knowledge of the terms: diatonic, chromatic and enharmonic. Yet the two words do not belong together in the manner that we might expect in a language such as English. The ‘chromatico’ refers in the explanatory text of the prologue to the tenor—the voice which holds on to the longest notes in the choral texture. However this line is simply diatonic and it might be that the description, set to music in the Prologue, alludes to the overall colourful alchemy which Lassus brings to his outlandish sounds. This harmony, unparalleled in contemporary practice and the subject of intense analysis over the years, is certainly arresting to the listener. How thoughtful of Lassus to provide in song a description of what was about to happen in aural terms—a warning clause. Yes, if examined from either viewpoint of tonality or atonality, the remarkable modulations appear incongruous. The composer appears to want to be forward-thinking in creating a New Music, as was evidenced by heated argument with other musicians at the time. If the listener is tempted to think that the astonishing shifts of harmonic context (NB: not modulation as we know it) are simply gratuitous, then be assured that harmonic analysis suggests convincingly that the composer’s aim is simply to avoid the close occurrence in the vocal lines of the dreaded tritone or diminished fifth. In addition, when the voice-parts are examined horizontally, there is no sense of the singer having to perform acrobatics or negotiate baffling intervals, except where the disposition of chordal writing is adjusted to avoid classic, parallel flaws. It is possibly an attempt to set the unique texts of the twelve sibyls as if from a world unbound by the constraints of rules and conventions.

Examining the texts from the point of view of the composer, it is remarkable that the prophesies were supposedly written by twelve different sibyls and yet conform to a structure of six-line poems in dactylic hexameter. The concordant message of the prophecies shows some of the imagery of, for example, the Book of Revelation, with its flavour of apocalyptic warning, and clear prediction of Christ’s incarnation and the purpose of his mission. Why therefore is this renowned setting a solitary example of such a remarkable set of texts? Were later composers overawed by Lassus’s prototype—had he said it all? The present-day setting by Tymoczko combines a comprehensive use of vocal and ensemble techniques with a hint of homage to Lassus. The inspiration of prophecy and impending catastrophe from different eras is shared in the text, and there is a nod to the sonorities and shapes of the earlier work. The modern work makes advanced use of arithmetical complexities in rhythm, but it is the harmonic colour-shifts which might be said to show the strongest connection between the two works.

The Council of Trent (1545-1563) may have dampened enthusiasm for employing these sibylline texts in choral works, as such material might be deemed heretical by ecclesiastical authorities. On the one hand, the tradition of using the prophecies was alive and well in such examples as the Song of the Sibyl, performed on Christmas Eve throughout Europe (especially in Spain), an inclusion in the sequence Dies irae ('Teste David cum Sybilla'), and even references by St Thomas Aquinas (in his Summa, referring to the Incarnation of Christ) and St Augustine (on the foretelling of the end of the world). Yet in the end, it was the Fathers of that Council who relegated the writings to the grey area of folk tradition, a colourful example of a traditional tale possessing the status of fact when it appears to have been doctored at various points after the very events it purported to predict—most notably the birth of Christ. In general terms its position is now akin to being among the Apocrypha, but it is not officially listed as such. There is also the likelihood that the sibyls, being mere women, faced a certain discrimination by the powerful, male figures in the Church. Any inspiration in writings or teachings which appeared to emanate from mystical sources might have been viewed with suspicion and suppressed at the earliest opportunity, as was suffered by Hildegard of Bingen, the multi-talented abbess, known popularly as the Sibyl of the Rhine, who was dealt with so harshly by the local hierarchy on the flimsiest of grounds. Since most composers of liturgical material relied on the patrimony of the Church for a performance platform, there would be reluctance to proffer settings of material which had been effectively proscribed. It was not only in England that composers paid dearly for showing very tangible connections with material deemed to be contrary to doctrine. Selecting acceptable texts was at the least a wise business choice.

The groupings of the settings owe more to musical features than any textual considerations. It is rarely straightforward to make pronouncements on the actual pitches that centuries-old, unaccompanied vocal music was sung at, and there are existing disagreements about presumed transpositions of some of the movements of the Prophetiae. That aside, allowing the Prologue to be classed as precisely that, the twelve movements of the work can be paired in to groupings which offer contrasts in the range of the voices and, to a certain extent, by the appearance of what could be loosely termed ‘key changes’. Pairs 1, 3 and 6 are for conventional four-part grouping (SATB), 2 and 4 for slightly higher pitches and 5 for lower voices. Such aural relief is a common feature of the Renaissance and can be heard for example in Tomás Luis de Victoria’s Tenebrae Responsories where the meaning of the text is partly illuminated by similar treatment. In the Lassus, pairs 2, 3 and 6 have flats at the clefs, although given the accidental-rich nature of the writing, this is not so significant for the listener.

Lassus’s Prophetiae Sibyllarum is discussed far more than it is performed. It eludes conventional categorization and confounds simple analysis, and we linger so long on its peculiarities that we tend to forget just how ravishing it is. This project began as graduate class at Princeton University, where students were introduced to the Lassus work and its riddles, before being asked to compose their own responses to it. Gallicantus performed these eight student works on Princeton’s campus in October 2015, alongside larger responses to the piece by Professors Dmitri Tymoczko and Dan Trueman. This recording represents a partial account of all this work, with Dmitri Tymoczko’s Prophetiae Sibyllarum heard alongside offerings from the ‘Sibyl of the Rhine’, Hildegard von Bingen, and of course the Lassus work itself. Just as the words of the ancient sibyls were manipulated to support a Christian narrative in the 15th and 16th centuries, Tymoczko’s work sets poems by Jeff Dolven which recast the sibyls’ role: this time to the teller of grim truths of present life in post-industrial America. As an epilogue we have included the final movement of the suite Visions, composed by one of the students on the course, Elliot Cole. ‘I saw you under the fig tree’, a simple 4-part setting beneath an extraordinary countertenor glissando, is Jesus Christ’s response to Nathaniel and is held as an affirmation of Christ’s omniscience.