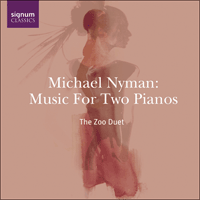 The Zoo Duet perform works for two pianos by Michael Nyman, one of Britain's most innovative and celebrated composers.

'Released shortly after the composer's 60th birthday, this album from The Zoo Duet presents works that deserve to be better known. Taking a line for a second walk is vintage Nyman, conceived originally as an orchestral work for Houston Ballet in 1966 and transcribed for two amplified pianos without any loss of its hypnotic intensity. Water Dances began life as music for Peter Greenaway's film Making A Splash and receives its premiere recording in its five-movement form on this disc' (Music Week)
'Alongside Ludovico Einaudi, Nyman is the world's foremost composer for contemporary piano. But unlike his Italian compadre, Nyman delights in pushing back the frontiers of new compostion. His music is romantic, at times chaotic and always inventive. This collection features three pieces, an orchestral work, a five-movement piece for film and a delightful five-minute interlude' (The Shropshire Star)

Perhaps the most important aspect of Michael Nyman’s music is that it requires little in the way of explanation. It may be interesting to note that Taking a line for a second walk began life in 1986 as an orchestral work from the Houston Ballet, or that Water Dances—originally written for Peter Greenaway’s film Making a splash and appearing here in its five-movement form for the first time—is in part derived from a chord progression taken from a Monteverdi madrigal. Like the best classical , jazz or pop music, Nyman’s output does stand up to closer analysis, but the secret of its appeal lies not in the field of the academic, but rather in its ability to speak to a large and culturally diverse audience.

Nyman is one of the key figures in a nameless movement which has revolutionised contemporary classical music over the last twenty years. ‘Art music’ has undergone a seachange and composers have emerged with the technical ability and the self-confidence to demonstrate that it is possible to write progressive and challenging new music without alienating a large part of the classical audience, while attracting an even broader rock-and poporientated public.

This group of composers has effectively dismantled the barriers which were perceived to have existed between the worlds of classical and popular music, but no-one has played a greater role in bridging this divide than Michael Nyman. He has combined Purcell and Mozart, 1950s rock ‘n’ roll, ancient Sumerian quasi-feminist texts, Queens Park Rangers Football Club and innumerable other diverse musical and cultural sources to produce a style of composition which is romantic, eclectic, occasionally chaotic, but uniquely his own.

Michael Nyman
When Michael Nyman published his study Experimental Music: Cage and Beyond (1974, reprinted 1999), he could hardly have foreseen his own contribution to that ‘beyond’. Disaffected with the then current orthodoxies of international modernism, Nyman had abandoned composition in 1964, preferring to work as a musicologist, editing Purcell and Handel, and collecting folk music in Romania. Later he wrote criticism for several journals, including The Spectator, where, in a 1968 review of Cornelius Cardew’s The Great Digest, he became the first to apply the word ‘minimalism’ to music.

That same year, a BBC broadcast of Steve Reich’s Come Out opened his ears to further possibilities, and a route back to composition began to emerge. In 1968 he wrote the libretto for Harrison Birtwistle’s ‘dramatic pastoral’ Down by the Greenwood Side. Later, Birtwistle, by now Musical Director of the National Theatre, London, commissioned him to provide arrangements of eighteenth-century Venetian songs for a 1976 production of Carlo Goldoni’s Il Campiello, for which Nyman assembled what he would describe as ‘the loudest unamplified street band’ he could imagine: rebecs, sackbuts and shawms alongside banjo, bass drum and saxophone.

Nyman kept the Campiello Band together after the play’s run had finished, adding his own propulsive piano-playing to the mix. A band needs repertoire, and Nyman set about providing it, beginning with In Re Don Giovanni, a characteristic treatment of 16 bars of Mozart. The Band’s line-up mutated, amplification was added and the name changed to the Michael Nyman Band. This is the laboratory in which Nyman has formulated his compositional style around strong melodies, flexible yet assertive rhythms, and precisely articulated ensemble playing.

If works for the Michael Nyman Band have dominated his output, the composer has written for a wide variety of ensembles, including symphony orchestra, a cappella chorus and string quartet. He has written several stage works, notably The Man who Mistook his Wife for a Hat (1986), derived from a case study by Oliver Sacks, and has provided music for such distinguished choreographers as Siobhan Davies, Shobana Jeyasingh, Lucinda Childs, Karine Saporta and Stephen Petronio.

His music has reached its largest audience by way of his film scores, most famously for Peter Greenaway, with whom he collaborated on eleven movies between 1976 and 1991. Other directors with whom he has worked include Jane Campion (The Piano, 1992), Volker Schlöndorff (The Ogre, 1996), Neil Jordan (The End of the Affair, 1999) and Michael Winterbottom (Wonderland, 1999 and The Claim, 2000). He also collaborated with Damon Albarn on the music for Antonia Bird’s Ravenous (1998).

Nyman has provided music for a fashion show ( Yamamoto Perpetuo for designer Yohji Yamamoto, (1993), the opening of a high-speed rail link (MGV, 1993) and a computer game (Enemy Zero, 1996). That sensitivity to occasion is enriched by a talent, shared with baroque composers, for refiguration: the Concerto for Harpsichord and Strings develops ideas encountered in The Convertibility of Lute Strings and Tango for Tim; the Third String Quartet lies behind the score for Christopher Hampton’s 1996 movie Carrington.

The music/multi-video event The Commissar Vanishes, based on David King’s book about Stalinist manipulation of photographic documents, received its first performance in London in December 1999, and the opera Facing Goya was premiered in Santiago de Compostela, Spain in August 2000.

In October 2001, Romaeuropa Festival, Rome dedicated three entire days as a homage to Michael Nyman and his music. The programme included world premieres, including a specially commissioned choral work to celebrate the restoration of Michelangelo’s Mosè statue in the Church of St. Peter in Chains.

In May 2002 Michael Nyman and his band returned to the Royal Festival Hall performing in the UK for the first time the soundtrack to Dziga Vertov’s 1929 classic black and white film Man With a Movie Camera. The film documents the full spectrum of 1929 Soviet urban life with dazzling inve n t iveness. Performed with The Commissar Vanishes, these two films contrast the light and dark sides of Soviet life in 1920s and 30s.

Nyman together with U. Shrinivas (electric mandolin) and the singers Rajan and Sajan Misra presented in July 2002 an evening of music—a joint project that subtly combines the talents of the assembled artists. The works represent a period of collaboration between Nyman and the Indian master musicians, available on CD through Warner Classics.

Nyman revised his opera Facing Goya for the Badisches Stadtstheater, Karlsruhe, premiered in October 2002. This marked the start of a three year period as ‘Composer in Residence’. His first violin concerto, commissioned by the Schleswig- Holstein Musik Festiva, was premiered in Hamburg in August 2003 by violinist Gidon Kremer and the Festival Orchestra under the baton of Dennis Russell Davies.

At every turn Nyman has proved eminently practical. Not for him the ivory tower anguish of a tormented composer grappling with abstract systems. Rather he has consistently displayed an openness to collaboration, a spry sense of humour, a literate imagination and an instinctive ability to engage a highly diverse audience.