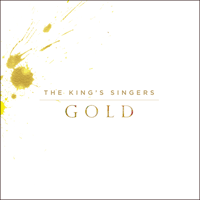 'The plans for our 50th celebrations in 2018 have been some years in the making. We have recorded a brand new triple album—GOLD—which features some of the most-loved pieces in our repertoire, new works from Bob Chilcott, John Rutter and Toby Hession, and some fabulous new arrangements.' (The King's Singers)

‘What hits you first and leaves you last when listening to this project is the astonishing, exhilarating musicianship of these singers … looking back over 50 years of performances and recordings by The King’s Singers, it’s hard to think of a group whose music-making has aged so well. The joy, the generosity and the eclecticism of their earliest recordings are all still the defining qualities in their latest … here’s to 50 more years’ (Gramophone)
‘For King's Singers fans, this set is an automatic purchase. For others, its extraordinary versatility and consistent enjoyability are warmly recommended’ (BBC Music Magazine)» More

It doesn't matter where it's from, who it's by, or when it was written. As we celebrate our soth birthday, we'd like to take you on a new musical journey—one that pays tribute to our heritage, but at the same time showcases the diversity of music in our world today and harnesses the maverick spirit that guided the original King's Singers. It also renews our commitment to be dynamic players both now and in the. future of music. Unleashing all the joy we find in song and crowning half a century of dedication to music, the result is Gold.

The current incarnation of King’s Singers approached this 50th Anniversary release with great excitement—albeit with some trepidation! How could we possibly create an album (or, as it turned out, three albums!) that would reflect all the group’s work over five decades, honouring its history and the achievements of our predecessors? In the end, we decided to go back to basics.

We spent months trawling through programmes and recordings to finalise this selection of music: Old Favourites that the group has performed for decades jostle for position with more Recent Additions (both classical and pop), and compete with Brand New Works commissioned especially for this project. A long-list of well over a hundred pieces has been whittled down to a final track-list of 60 that, we feel, represents all the styles and musical epochs that The King’s Singers have championed across Five Decades of Performance and recording.

Regarding recording style and technique, we again looked to our archives. By modern standards, the technology the original six King’s Singers used when they made their first album in 1971 was pretty basic. Huddled around three microphones in a small studio, they had very little of the control and barely any of the special effects we expect from most commercial recordings today. Fifty years ago, recording capabilities extended to little more than adding reverberation and some basic editing. Most tracks had to be put down in a few long takes, unlike today’s modern computerised recording process where hundred of short bursts may be spliced together to create a track.

Yet, despite the original group’s primitive tools, they produced Something Extraordinary: an album bursting with energy and executed with laser-like precision. Listening today, we literally hear the Excitement in their Voices, and perhaps even the realisation that what they were doing hadn’t really been done before (although of course they can have had no idea what was to become of the group)! That Debut Album has been the benchmark for each and every recording The King’s Singers have made since.

Trying to put our finger on what exactly made this album so special, we concluded that it could be summed up by one word: honesty. Those six singers wanted nothing other than to send their craft into the world, simply and elegantly. And so, Honesty became our watchword.

We want to honour the formidable skill of those original six King’s Singers—indeed, every singer who has been a member of the group throughout its history—by releasing a 50th Anniversary Recording that’s as honest as that very first album. The result is that when you listen to Gold, you hear exactly what you’d experience at a live King’s Singers performance. We sang every piece exactly as if there was an audience in front of us (which, in some sessions, there was), relying heavily on the acoustics rather then individual, close-set microphones—and of course there’s no auto-tuning or multi-tracking! We knew we had to channel the raw purity of our six individual voices if we hoped to recapture the joy the very first King’s Singers album still brings to us. And so, here it is: a set of three Gold albums that aims to let all the music we’ve chosen shine as brightly as possible. We hope you enjoy listening to Gold as much as we’ve enjoyed making it, and that you also find it represents the very best of The King’s Singers. Onwards and upwards: Here’s to the Next 50 Years!

With Thanks: This project was a huge undertaking. First and foremost, The King’s Singers would like to thank Signum Records and Music Productions for their invaluable assistance in making the recording possible. Principally, Steve Long and Mike Hatch at Signum, and Claire Long at Music Productions supplied unswerving support throughout. Nigel Short was a constant source of advice and encouragement as our producer, and constantly pushed us to a higher level. Mike Abrahams was inspirational in his design concept and the results are simply stunning!

We should also like to acknowledge the support of the Minnesota Commissioning Club, who generously gifted Toby Hession’s new work to the group in memory of one of their own, our friend and champion Jerry Fischer.

Finally in this, the group’s 50th Anniversary Year, we feel an especially strong debt of gratitude to all former members of The King’s Singers and all who have been instrumental in our career thus far. Last, and by no means least, to our families and loved ones, without whom we would be lost.

Heartfelt thanks to you all.