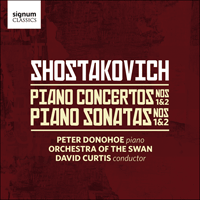 Piano Sonata No 1 Op 12 (1926)
On 20 February 1927 Prokofiev, during his first return visit to Russia since leaving his homeland in 1918, was invited to hear compositions by some rising young composers. Among them was the twenty-year-old Shostakovich. Prokofiev wrote afterwards in his diary: 'Quite a young man, not only a composer but also a pianist. He played by heart and with panache, having passed me the score to peruse as I sat on the sofa. His Sonata opened with a vigorous Bach-like two-voice counterpoint, and the second movement, which followed without a break, is written with supple harmonies surrounding an interior melody … it was altogether so much more lively and interesting than Schillinger’s piece [played previously] that I am quite happy to start praising Shostakovich. Asafiev [a musicologist and friend of Prokofiev’s] laughs at me, saying I like Shostakovich so much because the first movement is so clearly influenced by me.'

There is indeed a distinct echo in Shostakovich’s first piano sonata from the opening of Prokofiev’s third piano sonata, composed in 1917 but itself based on an earlier work Prokofiev composed aged 16. There are hints, too, of Prokofiev’s penultimate Vision fugitive, itself inspired by the street fighting during the February 1917 Revolution. It is altogether one of Shostakovich’s most ferocious works, and amply demonstrates the young pianist-composer’s ambition. Indeed, Shostakovich was already seen as one of the brightest hopes of Soviet music: in just the previous year he had been unanimously accepted on the Leningrad Conservatory’s post-graduate composition course, aged 19, having already composed his first symphony—the work which in May 1927 was to receive its first Berlin performance conducted by Bruno Walter and then subsequently taken up by Toscanini and Klemperer. His promise as a pianist was virtually on the same level: only a month before his first encounter with Prokofiev, Shostakovich had participated in the first Chopin Piano Competition in January 1927, in which he reached the finals; and his repertoire encompassed such virtuosic works as Liszt’s Venezia e Napoli and Beethoven’s 'Hammerklavier'.

In his compositions Shostakovich, after mastering the orthodox nationalist style of Borodin and Rimsky-Korsakov in his earliest orchestral works, had quickly shown a rebellious streak. To the dismay of both his composition teacher Maximilian Steinberg (Rimsky-Korsakov’s son-in-law) and his piano teacher Leonid Nikolayev, Shostakovich increasingly turned for inspiration to such leading modernists as Stravinsky and Prokofiev. Nikolayev was distinctly unimpressed with Shostakovich’s Op 12, calling it 'a sonata for metronome to the accompaniment of piano'. It is, of course, far more than that, but it is unquestionably a gnarly and knotty work for both performer and listener. It starts with a by turns nervy and thunderous allegro, eventually arriving at a rumbling tremulando in the bass punctuated with pugnacious note clusters. Then follows a lento in which an alto melody is picked out, sandwiched amid what Prokofiev described as 'supple harmonies' (here one may suspect the lingering influence of Scriabin, notwithstanding the fact his work was much reviled by Shostakovich in public). This leads without a break into a concluding allegro, boiling upwards from the bass like a malevolent spirit (and surely recalled by Prokofiev in turn in his eighth piano sonata composed during World War II).

Piano Concerto No 1 Op 35 (1933)
In 1932, having composed his opera Lady Macbeth of the Mtsensk District, Shostakovich decided to return to the concert platform as a pianist. For that purpose, he composed a set of 24 Preludes, Op 34, in December, shortly followed by his concerto for piano, trumpet and strings in spring 1933. Though this was his first attempt at the concerto form, his original intention—as might be guessed from the work’s title (often replaced retrospectively and misleadingly with the title Piano Concerto No 1)—was not to create a performing vehicle for himself: Shostakovich later claimed that its unusual instrumentation of piano with string orchestra and solo trumpet was due to his original intention to write a trumpet concerto, and he only added a piano when he found writing for that instrument alone too great a challenge.

Again, as with the first sonata, we can hear the influence of Prokofiev. Shostakovich had performed Prokofiev’s first piano concerto several times in the late 1920s; one of the most haunting sounds of his own first concerto is a lone muted trumpet playing a theme originally heard on the strings, then played by the piano soloist—which surely recalls the moment in Prokofiev’s slow movement when the piano melody is given a sardonic, ‘off-key’ imitation by a muted trumpet. Yet in the dour poetry of Shostakovich’s movement one senses that here he is speaking from the heart rather than indulging in the wry humour to be found abundantly in the concerto’s outer movements.

Though nominally in four movements, the third movement, notwithstanding its striking moment of Mahlerian pathos, is so brief that it effectively serves as a prelude to the finale; so to the casual listener the work falls into three main movements: a slow movement framed by lively outer movements in which we are presented with a circus-parade of Classical clichés in the style of Mozart, Haydn and Beethoven (including an actual quotation from Beethoven’s ;Rage over a lost penny'), overseen by a swaggering trumpet soloist. Myaskovsky, a fellow composer and close friend of Prokofiev’s, noted in his diary after hearing a performance: 'Piano Concerto—brilliant, with philistinism.' The concerto found greater favour outside the Soviet Union, and alongside the first symphony and Lady Macbeth was one of the few works for which Shostakovich was widely celebrated before the appearance of his seventh symphony during World War II.

Piano Sonata No 2 Op 61 (1943)
For all Shostakovich’s rebelliousness as a student, his appreciation of his Conservatory piano professor became clear when he received news in 1942 of his death. Leonid Nikolayev died on 11 October from typhoid fever in Tashkent, where he had been evacuated during the Nazi invasion of the Soviet Union. Before the end of the year, Shostakovich had sketched out a piano sonata dedicated to Nikolayev’s memory. In January Shostakovich himself caught typhoid fever, and after withstanding its most painful phase turned again to the sonata; by February he had managed to complete its sonata form first movement, which he showed to Lev Oborin (the winner of the very Chopin Competition he had competed in in 1927). Oborin gave Shostakovich helpful feedback and much encouragement to complete the work. This he did on 17 March 1943.

Shostakovich’s second piano sonata is one of the most substantial works he composed for that instrument, second only to the mighty cycle of 24 Preludes and Fugues he composed less than ten years later. It opens with a limpid allegretto whose opening (mostly) two-part texture suggests a milder form of the 'vigorous Bach-like two-voice counterpoint' Prokofiev identified in the first sonata. This builds and reaches the second subject: a more straight-forward texture of a melody in octaves with a simple chord accompaniment. These two themes are developed, building an increasingly involved and chromatically more anguished texture. The slow central movement offers hints of a more lyrical style in the midst of bare and often angular accompaniment with bitter harmonic implications. The finale, in the form of a set of nine variations, was in direct tribute to Shostakovich’s teacher who had recommended variation writing as a perfect exercise for budding composers to discover their own style.

Piano Concerto No 2 Op 102 (1957)
Shostakovich composed his second piano concerto in 1957, just as he was recovering from the huge emotional blow of the sudden death of his first wife, Nina. When in December 1954 she had succumbed to a cancerous tumour, Shostakovich was left a widower with two teenage children, with only his mother to help. Slightly less than a year later, on 9 November 1955, she too died. Shostakovich, lonely, coping with two wilful and almost adult children, and just short of his fiftieth birthday, over-hastily remarried in July 1956. His new wife, a member of the Communist Youth Organization, had no understanding or interest in music. She showed, if anything, even less understanding of Shostakovich’s far from biddable offspring.

It was in the first year of his new marriage that Shostakovich composed his second piano concerto for his son, Maxim, who was then studying at the Moscow’s Central School and showing some promise as a concert pianist. Scored more or less for a conventional classical orchestra (supplemented by a piccolo and side drum with their 'fife and drum' militaristic—or perhaps more precisely in this context, Soviet Pioneer—associations), the work appears a light divertimento rather than offering any of the shadows to be found in Shostakovich’s earlier concerto, let alone the darkness of his sonatas. At first listen, one would hardly guess that the second concerto was composed during such a fraught time in Shostakovich’s life:apparently bright and even mischievous in its outer movements (the brilliant finale with its lively 7/8 episodes being particularly memorable), the central movement is one of Shostakovich’s most easeful and has itself become a popular favourite. Yet the pianist, Peter Donohoe, hears a darker subtext in the typically ‘triumphant’ treatment given to the first movement’s second subject, the modulation from C major to the minor for the end of the second movement (whose final bars are reminiscent of those of the enigmatic fourth symphony), and the relentlessness of the superficially light-hearted third movement. Maxim gave the first performance of the Second Piano Concerto on his 19th birthday, on 10 May 1957.