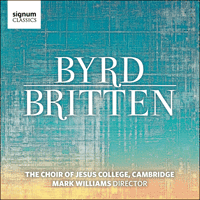 Led by Mark Williams, the Choir of Jesus College Cambridge continues its much-praised series of recordings on Signum with a new album of works by Britten and Byrd, composers separated by some four centuries and whose lasting significance on English music can scarcely be equalled.

'These are good performances of two British composers by noth choirs of Jesus College, Cambridge. The College Choir, which uses female undergraduate singers, gains the edge over the choristers in a focused, sparkling performance of Byrd's 'Laudibus in sanctis'' (BBC Music Magazine)

William Byrd (1540-1623) and Benjamin Britten (1913-76), their respective careers separated by about three hundred and fifty years, share one very significant characteristic. They were both, in quite different ways, outsiders. As a devout Catholic existing within an alien environment—a state which ultimately viewed Catholicism as the equivalent of sedition—Byrd was obliged to pursue a kind of double life. In the 20th century Shostakovich’s situation was not dissimilar, as he tried to steer a course between the opposing demands of the Soviet authorities and his own creative instinct. Byrd’s name appeared on a list of recusants—those who maintained their loyalty to the Catholic Church and refused to attend Church of England services. The term is now used more generally but it originated in Byrd’s lifetime. Composers such as Dowland and Philips chose foreign exile, whereas Byrd, White and others remained in England and expressed their spiritual exile in music of emotional intensity.

Like Byrd, Britten became highly regarded by the establishment for his artistic achievements, but reservations regarding his homosexuality prevented his complete acceptance. Although he was elevated to the House of Lords in June 1976, both his pacifism and his sexual orientation (a crime until the Sexual Offences Act was passed in 1967) made him an outsider. He was created a Companion of Honour and accepted the Order of Merit, but he had previously declined a knighthood.

This disc brings together two of Britain’s most celebrated composers whose lives and beliefs estranged them from the British establishment. Throughout history, there are many examples of oppressive circumstances inspiring powerful music of protest. In Byrd and Britten, this protest is subtly portrayed through the choice and setting of text, through the use of allegory and through a certain melancholy which is often intangible but undoubtedly present.

While Byrd was employed at Lincoln Cathedral, serving from March 1563 as organist and master of the choristers, he was asked to maintain a supply of divine services, but also of “songs” for use in church. These were what we now understand as English church anthems. O Lord, make thy servant, Elizabeth our Queen, a nation-uniting prayer for the health and welfare of Queen Elizabeth I, is an example of this new style, with words adapted from Psalm 21. Its intricacy is such that at one point six different words are sung simultaneously. In the sumptuous Amen section the soprano line holds a long note above the interweaving of the other five parts.

The Nunc dimittis recorded here—a tract for the Feast of the Purification—is not a setting intended for Evensong or Compline, but is taken from the Gradualia, a great cycle of liturgical settings for the Catholic calendar from Advent to Trinity, published in two volumes in 1605 and 1607. In the passage beginning Quia viderunt Byrd employs some false relations, and the bell-like descending scales at Lumen, immediately inverted in the other parts, reflect earlier figures at saltare tuum and quod parasti.

Also from the Gradualia sequence is the 4-part motet Ave verum corpus, intended for the Feast of Corpus Christi and one of Byrd’s most frequently performed and recorded works. Byrd wrote a dozen pieces for this feast-day and associated rites. Biographer Kerry McCarthy writes “One household near Byrd’s in rural Essex showed a remarkable mixture of piety and audacity by leading a Corpus Christi procession around their gardens in 1605”—“the house being watched” … “which we knew not till the next day.” The opening harmony, with the mediant shift between the Ave and Verum, which would have been shocking to contemporary ears, is widely regarded to be a subtle reference to the importance of the word verum (meaning true) and the significance of the Roman Catholic belief in transubstantiation, a doctrine which was abandoned by the reformed Church.

In Laudibus in sanctis Byrd sets an anonymous Latin paraphrase of Psalm 150, a rare example of his use of a complete psalm. This, the opening piece of the 1591 Cantiones Sacrae publication and one of Byrd’s most popular motets, is written in elegiac couplets and is characterised by abundant syncopation—“a battery of very lively contrasted rhythms”, in Joseph Kerman’s words. Byrd also plays with the kind of word-painting more customarily found in madrigals. Kerman describes it as employing “a style … designed to dazzle Morley and his admirers in the 1590’s”.

Praise our Lord, all ye gentiles (a setting of Psalm 117) appears in the 1611 songbook, sub-titled “Psalms, songs and sonnets, some solemn, others joyful, framed to the life of the words.” It has been noted that Byrd always renders the Latin Dominus or Greek Kyrios as “our Lord” rather than “the Lord”. This was widely recognised as a specifically Catholic usage. George Abbot, Archbishop of Canterbury from 1611, observed “… our English people do practise it if they savor of Popery.”

Byrd composed more than forty keyboard works but inclusion of lost or fragmentary pieces would increase the number to over 60. The Queen’s Alman is a group of variations on a well-known Italian melody which had become equally popular in England. The melody itself has a structure of four bars plus eight bars. Together with the works of several other late Elizabethan and early Jacobean composers, The Queen’s Alman appears in the Fitzwilliam Virginal Book, so-called because it was the 7th Viscount Fitzwilliam who bequeathed the volume to Cambridge University in 1816. This very large manuscript collection is held in the museum founded that year and named after him.

In 1584 Byrd engaged in a dialogue in motet form with Philippe de Monte (1521-1603). De Monte had travelled to England as a singer in the Royal chapel choir forming part of the Spanish King Philip II’s entourage as he celebrated his marriage to Queen Mary. The 11-year-old Byrd is believed to have met him on that occasion. Thirty years later de Monte, now employed in Prague, sent Byrd his 8-part motet Super flumina Babylonis, a setting of the first three verses of a well-known song of captivity, Psalm 137 (136 in the Vulgate). Its meaning ‘By the waters of Babylon, we sat down and wept when we remembered thee, O Zion’ would not have been lost on Byrd, who reciprocated by setting the next four verses of the same psalm, also in eight parts and in the same key. The translation of Quomodo cantabimus (How shall we sing the Lord’s song in a strange land) can leave little doubt about Byrd’s feelings as a recusant Catholic in the newly-protestant England.

Britten composed A Hymn of St Columba for chorus and organ in December 1962, about eighteen months after the War Requiem. The piece was intended to mark the 1,400th anniversary of the saint’s missionary voyage from Ireland to the small island of Iona in the Inner Hebrides. From there, where he founded a monastery, he made further trips to the Scottish Highlands. The premiere of Britten’s piece was given in Gartan, County Donegal, (Saint Columba’s birthplace) on 2nd June 1963. The words of the hymn (Regis Regum Rectissimi) are attributed to Saint Columba (521-597). Britten’s performing instruction to sing “with fire” reflects Columba’s missionary zeal.

In 1961 Britten added to his 1934 Te Deum a setting of Jubilate Deo, words from Psalm 100. The relatively conventional earlier piece was negatively—and rather unfairly—reviewed by Constant Lambert as “drab and penitential”. The Jubilate Deo, written in response to a request by the Duke of Edinburgh for performance in St George’s Chapel Windsor, is arresting, uplifting and inventive, with a quieter middle section between the joyful outer sections, and a jaunty organ part.

Hymn to St Peter dates from 1955. Britten wrote this piece for the quincentenary of the Church of St Peter Mancroft in Norwich. With words from the gradual of the Feast of St Peter and St Paul, the work is based on the plainsong Tu es Petrus, played initially by the organ before the first choral entry. The middle section has the character of a scherzo and is marked “quickly and lightly”.

Britten composed Antiphon for chorus and organ in March 1956. A setting of words by George Herbert, the piece was written for the centenary of St Michael’s College, Tenbury. The beginning of Herbert’s poem—“Praised be the God of Love/Here below/And here above”—and its ending—“Praised be the God alone/Who hath made of two folds one”—gave rise to Britten’s division of the choir into two groups. The composer’s use of bitonality reaches its apotheosis in the final section where the solo trio and main choir alternate chords until they settle on a consonance on the final word ‘one’. This invigorating piece is among the more neglected of Britten’s works. It was sung at his memorial service in Westminster Abbey.

Britten composed his Missa Brevis in 1959 for the boys of Westminster Cathedral and their director George Malcolm. Malcolm, about to retire from that post, had cultivated a tone which happened to perfectly suit Britten’s approach to boys’ choral writing—bright and sharp-edged, rather than the smoother effect of later cathedral tradition. This concise mass has no Credo and is accompanied by organ. Marked Slowly moving (passionato), the broad Kyrie is followed by a setting of the Gloria (marked Lively) which has an infectious rythmic quality—notated in 7/8 almost throughout. In the Sanctus (Broadly) Britten employs in quick succession the full range (all twelve notes) of the chromatic scale, to symbolise Pleni sunt caeli et terra gloria tua (Heaven and earth are full of Thy glory). The Benedictus (again Broadly—Slow and gentle) features two solo treble voices and the final Agnus Dei (Slow and solemn) has regular semitonal clashes of B flat and A in the organ part. A climax to fortissimo is followed by a quick diminuendo to the final staccato “dona nobis pacem”.

The 20-year-old Britten dedicated his Te Deum in C to Maurice Vinden and the Choir of St Mark’s, N. Audley St., London. In 1936 the BBC commissioned Britten to make a version for harp/piano with strings. Above a syncopated organ ostinato, C major arpeggios form the basis of much of the opening material, but Britten—like any top-rank composer—avoids banality or triteness. In the serene middle section a solo treble sings Thou art the King of Glory, O Christ (here sung by two sopranos and a treble), before the more animated and affirmative mood of the opening section returns. Relatively conventional, this early Te Deum is a deeply rewarding work, undeservedly among Britten’s more neglected compositions.