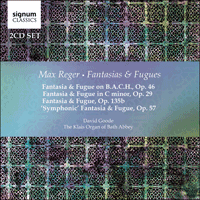 These discs bring together Reger’s four large-scale Fantasias and Fugues, which span the greater part of his career from 1898 to 1915. Even in this small group of works it is possible to see a progression from an early and partially-assimilated neo-Baroque idiom, through the complexity and grandeur of his middle period in Weiden, to the transparency and thoughtful atmosphere of Op. 135b.

The Fantasia and Fugue in C minor, Op 29 was written in 1898 when Reger was twenty-five. The Fantasia suggests an influence from Bach’s Fantasia in G minor, BWV542 in the rhetorical figuration of the RH, juxtaposed with dramatic chordal progressions, and the periodic introduction of quieter fugal sections. The Fugue adopts a moto perpetuo of constant semiquavers, developing textures of some complexity. It is arguably too long at 110 bars, although when the climax arrives, with the tune in stretto between the outer voices, it is certainly effective.

The Fantasia and Fugue on BACH, Op 46 is one of Reger’s most assured and successful inspirations, and has achieved well-deserved popularity despite its significant technical demands. In using the letters of Bach’s name for his musical material (in German musical nomenclature they become B flat, A, C and B natural), Reger was following in an august tradition dating back to Bach himself, and including works such as Schumann’s 6 Fugues on BACH and Liszt’s Prelude and Fugue on BACH In the Fantasia, as in Op 29, Reger structures the piece as an alternation between rhetorical chordal flourishes and more regular contrapuntal writing, usually beginning mezzo-forte before a crescendo; however, he manages to integrate the whole with impressive success. The Fugue follows a pattern common to a number of Reger’s fugues, but also to a standard late nineteenth-century way of playing Bach fugues: namely, a slow and quiet beginning followed by a gradual crescendo and accelerando. Here that dynamic is overlaid onto the structure of a double fugue; the energetic second theme, comprising an arch of running quavers, combines in due course with the main theme, before a heroic conclusion that revisits the opening chords of the piece.

The Symphonic Fantasy and Fugue, Op 57, written the following spring, in some ways represents a central marker in Reger’s organ music. Although he wrote two works that are slightly longer (Opp 73 and 127), never again would he write organ music of such textural density and harmonic instability. The piece is based on Dante’s Inferno, and it shares the key of D with Liszt’s piano sonata on the same subject. As part of a bold opening gesture, Reger creates an arresting dissonance for his first chord. The Fantasia is basically in ternary form—after a soft central section the opening material reappears, further thickened, two-thirds of the way through—but most listeners will apprehend it as a swirling panorama worthy of Hieronymus Bosch, sometimes lyrical (indeed the first soft music we hear becomes motivically significant) and sometimes of almost frightening grandeur. The Fugue has a lighter aspect, although the highly chromatic subject ensures that a somewhat febrile atmosphere remains as the piece progresses. Halfway through, a slower theme, built on a descending chromatic scale, is presented; and (as in BACH) this eventually combines with the main subject, towards a conclusion of granitic power.

The Fantasia and Fugue in D minor Op 135b was one of Reger’s last pieces, completed in 1915, and its genesis was closely tied up with his two settings (one unfinished) of the Requiem. Some of this can be heard in its largely elegiac tone; also noteworthy is the greater transparency of the writing, something towards which Reger had been steadily moving in recent years. At the opening, delicate arpeggios alternate with chordal writing and as the piece progresses a motif of four descending quavers becomes significant. The climax of the development, and an important passage in the middle of the Fugue, were (possibly at Straube’s instigation) omitted by Reger for the first edition; the complete version is played here. The Fugue begins in slow crotchets, with a grave lyricism. The note values gradually increase through quavers and triplets to semiquavers, before an elegant staccato theme, in a buoyant 12/8 metre, appears and—not surprisingly—is combined in various ways with the initial theme.

Over the centuries organs in Bath Abbey have stood in various different places in the building. In 1914 Sir Thomas Jackson built a gallery and organ facade in the North Transept for the Norman and Beard organ; it is still thought that this position provides the best compromise between the demands of liturgy and acoustics.

The new Klais Organ (1997) stands on this gallery and the Jackson case, which had already been supplemented by a Positive case designed by Alan Rome (1972), has been raised some 18 inches. Carved fretwork replaces the solid panels either side of the console to allow egress of sound from the Solo division placed immediately behind.

The case has also been given a back, sides and roof. Behind the facade the entire structure, action and windchest are new. The organ has mechanical action with electric coupling. Approximately half the pipes are built by Klais and the rest are from builders of earlier instruments (Wm Hill & Son; Norman and Beard; Hill, Norman and Beard). The organ has 4 manuals and pedals and 62 stops.