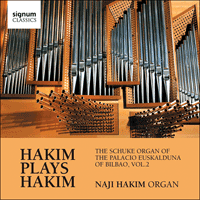 The Schuke organ of the Palacio Euskalduna of Bilbao – 2

Naji Hakim returns to the console of the Schuke Organ of the Palacio Euskalduna in Bilbao for a further volume of his powerful organ works, this time inspired by different locations around the world.

'Hakim is a composer of great individuality and wit. Harmonies from the French organ school and his native Middle East combine deliciously. He gets some thrilling colours from the Schuke organ in Bilbao' (BBC Music Magazine)

Ouverture libanaise (To Zeina Alam)
Commissioned by the City of Ingolstadt, this rhapsodic piece is based on several Lebanese folk tunes and makes use of mid-eastern scales and rhythms. In its last pages it also quotes the Lebanese national anthem.

Suite norvégienne (To David Scott Hamnes and Orgelklubben Ludvig)
This cycle of nine short and easy pedagogical pieces is built on melodies from the popular Norwegian repertoire, developed through contrasted compositional techniques and registrations. The opening piece, Langeleik, is a waltz with modal variations. Dype, stille, sterke, milde is a cantus firmus chorale prelude with the tune on the pedal division. Kråkevisa is characterised by its lightness and ornamental accompaniment. Mitt hjerte alltid vanker marks the center of the cycle; it is an expressive meditation on the cromorne. Bånsull i vals evokes classical writing using alberti bass. Håvard Hedde develops through a contrapuntal accompaniment and Byssan lull on a harmonic pedal. Litle Fuglen evokes the chorale style, before Kjerringa med staven leads into a cheerful and rhythmic dance to conclude the work.

Langeleik (Norwegian droned zither)
This tune was first transcribed in Kvam, possibly by Olav Sande (1850-1907). An important work based on the tune is Geirr Tveitt’s “Langeleik-låt” from Hundrad folketonar frå Hardanger, Op 150 No 27. A langeleik-slått or dance tune may be in the style of a halling, depending on the tempo, and is often used as an instrumental work.

The langeleik is a Norwegian droned zither, usually with one melody string and up to eight drone strings. While related to the German Scheitholt and Swedish Hummel, the Norwegian langeleik predates these instruments. The earliest dated instrument is from c.1524. Early instruments were tuned according to the Pythagorean scale; later instruments (post 1850s) may be equal-tempered. The tune used in this work is from Kvam in Western Norway.

Dype, stille, sterke, milde (Deep, silent, strong and mild)
This tune was composed by Ludvig Mathias Lindeman in 1871, for a hymn text by T. W. Oldenburg (1805-1842). Lindeman was the editor of the chorale book (1871) for M. B. Landstad’s Kirkesalmebog (1869), the first Norwegian hymnal. The Lindeman family was highly productive and influential in church music in Norway.

Kråkevisa (The crow song)
Over 100 text variants and more than 75 melodies have been associated with this well-known children’s folksong or medieval ballad common to all the Nordic regions. M. B. Landstad published two short variants in Norske folkeviser in 1853; the oldest known source is from a 17th-century Danish publication.

Mitt hjerte alltid vanker (Always my heart wanders)
This melody is the Norwegian variation of a Swedish folk tune from Västergötland, c. 1816.

Bånsull i vals (Lullaby waltz)
This tune and melody are from an anonymous Norwegian folk tune. Texts to bånsull-tunes are usually improvised for the actual occasion, and often consist of phonetic sounds.

Håvard Hedde (Håvard Hedde)
Using a Norwegian folksong from the late 1700s, the text is a simple poem about a humble man from Helle (Heddi) in Setesdal who lived in the late 18th century. His fate was unhappy; in one version, his betrothed betrays him; in another, he drowns on the way to make a marriage proposal.

Byssan lull (Sea shanty or lullaby)
The melody is a variant of a fisherman’s sea shanty found across the Nordic region. The initial rising fifth from the tonic is typical for this style of tune. The first phrase is usually also repeated, and the second phrase ends with a falling second interval. The text in this version was reworked and popularised by Evert Taube (1890-1976) in 1919.

Litle fuglen (Little bird)
Based on a Medieval religious folksong from Valdres, L. M. Lindeman transcribed this text and tune in 1848, according a form sung by Marit Larsdatter Leira (Leiro) in Aurdal. The text is perhaps better known as Tore liti or Duva sætter sig på Liljanqvist.

Kjerringa med staven (The woman with the staff)
Kjerringa med staven is a traditional Norwegian triple-metred slåttestev or slåtterim, derived from the Norwegian word to strike. While sometimes performed with fiddle, mouth harp or langeleik accompaniment, these tunes are meant to be sung a cappella by the dancer, who dances the springer or pols. The slåttestev consists of one strophe, although it is usual to add new text variants according to local tradition.

This music was used for a variety of purposes, both as entertainment and as accompaniment to dance and children’s games. The text was first notated by L. M. Lindeman in the mid-19th century, taken from the form sung by Anders Olsen Graff of Løten. The tune is from an older source; it was first published in Paris under the name Bondedans fra Bergens stift i Norge (Farmer’s dance from Bergen diocese in Norway). The traditional reading from Nittedal interprets the text as a spiteful poem about the dairymaids in Kongsvangskogen, where the farmers from Kirkeby and surrounding areas sent their cows to roam in the summer. These farmers claimed that the cows produced too little butterfat. Åtte pottar rømme is equivalent to about eight litres of cream, which is normally enough for around two kilograms of butter. However, Kari only managed to produce half as much, or fire merker (four cups). It seems reasonable to suspect Ola: He probably ate Kari’s cream!

Esquisses persanes (In memoriam Dr. Behnaz Payandeh)
The Esquisses persanes (Persian Sketches) were commissioned by my friend Prof. Marc Robert in memory of his wife, Dr. Behnaz Payandeh. They consist of two movements, Niya Yesh (gnosis) and Raqs (Dance), built exclusively on the Persian scale D flat C E F G flat A flat B and its twelve transpositions. The two part melismas of Niya Yesh symbolise the revelation of divine knowledge through self-knowledge. The melodic periods grow according to the principle of variation. Raqs is a joyous rondo toccata with an ornamental episode inspired by the negro spiritual Nobody Knows the Trouble I’ve Seen.

Suite française (To my wife Marie-Bernadette and my children, Katia-Sofia and Jean-Paul)
In this suite, which includes twelve short movements, the composer pays tribute to France; a country he has loved since his childhood for its music and its culture which remains dear to his heart, where he founded his family to whom this work is dedicated.

The general organization and the titles of each movement refer to the keyboard music of the French Grand Siècle which inspired the various forms and registrations used by the composer.

The dance is emblematic of French culture in the 16th and 17th centuries, and in this setting the development of instrumental music flourished. The Baroque suite stylises the court ballet and binds in a sequence of contrasting tempos, rhythms and characters.

Naji Hakim uses different sources and draws his thematic material from the repertoire of dances from the Renaissance and early Baroque:

Three Basque Dances
1. Zortziko (Danza vasca en homenaje a Pablo Sorozábal; A ma fille Katia-Sofía)
This work was commissioned by the Quincena Musical de San Sebastián 2016. 2016 was a very important year for the city, selected as the European Capital of Culture. The Zortziko (of eight) is a very popular Basque dance in a subtle bar with unequal beats. Pablo Sorozábal was a composer from San Sebastián who died in 1988, famous for his zarzuelas (opérettes), from whom Naji Hakim quotes allusively one of his songs (Maite).

The piece is shaped as follows: A majestic introduction (inspired by the incipit of Maite); an ornamented recitativo; a toccata in perpetuum mobile of semiquavers above an ostinato in double pedal articulating the rhythmical periods of the characteristic 8 beats of the zortziko; a recall of the introduction preceding a lightning conclusion, including in particular percussive chords alternating on three keyboards.

2. Ezpata Dantza (Sword Dance; A mon fils Jean-Paul)
The sword symbolizes the solar power and the generating energy. By symbolic homonymy, the composer chose the key of G Major to figure the Christ. The ezpatadantza comes from the region of Durango and is danced in front of the authorities and at the feast of Corpus Christi, during the mass, in front of the Holy Sacrament.

Naji Hakim’s Espata Dantza plays on the alternation between a ritornello and a light theme full of joy. The 8/16 barring is divided into two unequal beats: 8 = 5 + 3. The bouncing character arises from the 6th beat’s anacrusis impulse that should be slightly accentuated.

3. Fandango (A ma femme María-Bernadette Dufourcet Bocinos; Commissioned by the Houston Chapter of the American Guild of Organists for the 2016 AGO National Convention in Houston.)
The dance is introduced by equivocal barring 6/8 – 2/4, before the exposition of a festive theme in bouncing and light periods alternating with percussive chords on the hands. A more singing central episode precedes the recapitulation. The Basque fandango ends always with another dance step, Arin Arin in 2/4, characterized here by scales in dactylic rhythm prolonging the character full of life and joy.