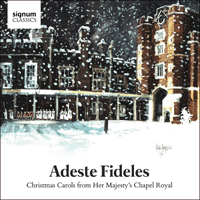 The Choir of the Chapel Royal, Huw Williams (conductor)

Cover artwork: Watercolour of the Chapel Royal in procession at Christmas (1989) by John Castle
Archive of Chapel Royal

Huw Williams leads the choir of Her Majesty’s Chapel Royal in a festive recording of Christmas carols old and new from St James’s Palace, London.

'This is a charming addition to the huge number of Christmas Carol CDs. The added-value is the warm and friendly mood created by this choir, which lends enchantment and magic to these diverse carols' (MusicWeb International)

The emergence of a version of the Adeste fideles in a manuscript from the Harmsworth Library auctioned as Lot 1958 in 1946, with its internal royal prayer for “Regem nostrum Jacobum” immediately preceding the Adeste fideles, places the latter’s origins over fifty years earlier than the hitherto earliest copies dated around 1740-60 bearing the name William Francis Wade. Lot 1958 may refer to King James II rather than his son James Francis Edward who tried unsuccessfully to regain his father’s Crown, and if so dates MS Lot 1958 to between 1685 and 1688 (unless continuing the Jacobite stance of recognizing King James II in exile nevertheless as rightful King after 1688 until his death in 1701), and would place Wade as a later copyist rather than the composer. If this is so then the early nomenclature of the Adeste fideles as “The Portuguese Hymn” would stem from its composition by Arabadoes (Friars of the Observance of the Order of St Peter of Alcantara), who were summoned from Portugal in 1667 by Catherine of Braganza to live in the Friary serving The Queen’s Chapel at St James’s Palace, and ended up serving both this Consort of King Charles II and also his brother James, both as Duke of York and later from 1685 as King, together with his Consort, Mary of Modena, at the Queen’s Chapel.

MS Catherina R, 16712 details payment “to the Syndick of our Fathers Arabadoes, to be spent for them the manner we have commanded 1000 l. Eleven Franciscan Friars”, and the Angliae Notitiae of 1684 continues to make mention of them at Court. The 15th-century founder of the Order, Peter Garavita, influenced St Teresa of Avila and was eventually canonized as St Peter of Alcantara in 1669 while members of the Order were serving at The Queen’s Chapel. It would have been a cause for much celebration—and perhaps the occasion for a new musical composition?! We should perhaps picture the origin and first rendition of the Adeste fideles amongst a group of friars each wearing a brown habit, hood and capuce with a seven decade rosary, a cord girdle, and sandals, singing in The Queen’s Chapel.

The Sans Day Carol—a variant of The holly and the ivy—was first transcribed from the singing of Thomas Beard, who lived in the Cornish village of St. Day (named after a Breton saint). Its publication in the Oxford Book of Carols in the 1920’s led to its universal popularity. John Rutter arranged his version while still an undergraduate.

Mary had a baby (sung here in Malcolm Sargent’s arrangement) is believed to have originated on St Helena Island, off the coast of South Carolina. It was collected by the Sierra Leonean scholar and researcher of West African music Nicholas G. J. Ballanta-Taylor.

Elizabeth Poston (1905-87) composed her beautiful version of Jesus Christ the apple tree in 1967. The best-known previous setting of this anonymous 18th-century poem is by Jeremiah Ingalls (1764-1838). Ms Poston composed much choral and vocal music as well as instrumental works (some for unusual combinations) and many scores for TV and radio productions.

Once in Royal David’s City, with text by Cecil Frances Alexander, was first published in 1848 and set to music a year later by Henry John Gauntlett. Since 1919 this carol has opened the Festival of Nine Lessons and Carols from King’s College Cambridge.

The now-familiar tune of The Sussex Carol (On Christmas night all Christians sing) was discovered and notated by Ralph Vaughan Williams when he heard it sung by Harriet Verrall of Monk’s Gate, near Horsham (hence the “Sussex” of the title). The text dates back to 1684 when it was published by the Irish bishop Luke Wadding. Vaughan Williams included The Sussex Carol in his Fantasia on Christmas Carols, but the arrangement sung here is by David Willcocks.

John Tavener (1944-2013) composed his setting of William Blake’s poem The Lamb (from Songs of Innocence and of Experience) in 1982 for his nephew Simon’s third birthday. Quietly haunting, it has become one of the most popular of modern choral works.

For his setting of A maiden most gentle Andrew Carter (born 1939) paraphrased the original words by the Venerable Bede, added an attractive organ part to a traditional French melody, and incorporated a wide variety of textures.

Thomas Weelkes’ glorious full anthem Hosanna to the Son of David is based on a paraphrase of verses from the Gospels of Matthew and Luke. Weelkes gained a reputation for drunkenness and was eventually dismissed from his position of organist at Chichester Cathedral. His final book of madrigals has on its title page “Gentleman of the Chapel Royal”, though as no records exist it seems that he was at best a Gentleman Extraordinary—i. e. unpaid supernumerary.

Jonathan Dove (born 1959) set Dorothy L. Sayers’ The Three Kings in 2000 in response to a commission from King’s College Cambridge for the Festival of Nine Lessons and Carols. The three stanzas represent young, middle-aged and old kings respectively, with a surprising change to the major key for the old king’s golden treasures (“many a gaud and glittering toy”).

An extrovert, celebratory contrast to its lullaby companion-piece, A Spanish Carol is one of a pair of traditional carols arranged by Andrew Carter, several of whose carol compositions or arrangements are among the most frequently performed today.

Suo Gân is a traditional Welsh lullaby, its title literally meaning lulling song or lullaby. Its tune (anonymous) first appeared in print in about 1800, while the words were written down by the folklorist Robert Bryan (1858-1920). George Guest’s arrangement was published as part of Two Advent Carols and a Lullaby. The song featured prominently in Spielberg’s 1987 film Empire of the Sun.

Mendelssohn’s There shall a star from Jacob come forth is from his unfinished oratorio Christus, of which he completed only thirteen movements in 1846, while he was working on Elijah. This title Christus was attached by Mendelssohn’s brother Paul after the composer’s death, but it is believed that Felix originally planned this music for a work to be entitled Erde, Himmel und Hölle (Earth, Heaven and Hell).

The text of O little town of Bethlehem was written by Phillips Brooks, a Philadelphia rector who was inspired by his visit to Bethlehem in 1865. He wrote the poem for his church three years later and the melody was added by his organist Lewis Redner. However, the best-known setting in the UK is the English hymn-tune known as Forest Green, adapted by Vaughan Williams from an English folk ballad called The Ploughboy’s Dream.

What is believed to be the earliest version of I saw three ships derives from 17th-century Derbyshire. Various explanations of the line “O they sailed into Bethlehem”—twenty miles from the Dead Sea—have been offered, but none is particularly convincing. David Willcocks’ version is one of many of his arrangements which appear in the five volumes of Carols for Choirs.

Michael Head (1900-76) is chiefly known for his songs—over a hundred of them, notable for their integrity within a conservative style. Among the most popular is The little road to Bethlehem, with touching words by Margaret Rose.

In A New Year Carol Benjamin Britten set the Pembrokeshire folk-song Levy-Dew (also known as Residue) in Walter de la Mare’s version from the anthology Tom Tiddler’s Ground. It appears as the fifth song of a collection of twelve entitled Friday Afternoons, Opus 7 (1934), composed for the boys of Clive House School, Prestatyn, where Britten’s brother Robert was headmaster.

Richard Popplewell (born 1935) preceded Andrew Gant as Organist and Master of the Children of the Chapel Royal, from 1979 to 2000. His Blessèd Jesu! here we stand, sung at Prince George’s christening on 23rd October 2013, was originally composed for the Duke of Cambridge’s own baptism on 4th August 1982.

While in Paris in 1934 among the large Russian emigré community, Stravinsky, having spiritually reconnected with the Russian Orthodox Church in which he was raised, composed a setting of Ave Maria. In 1949 he reissued this miniature with the original Church Slavonic text translated into Latin, as sung here.

The music of Adeste fideles was long attributed to John Francis Wade, but an earlier manuscript version appeared in 1946, relegating Wade to probable copyist rather than composer. Among the various other composers to whom the tune has been speculatively attributed is King John IV of Portugal (1604-56)—“The Musician King”, who amassed one of the largest musical libraries in the world.

The Epiphany anthem The Three Kings is the most widely popular work by German-born Peter Cornelius (1824-74), although his opera The Barber of Baghdad is occasionally staged. In The Three Kings, originally part of a song-cycle entitled Christmas Songs, the solo voice sings Cornelius’ melody above a chorale tune by Philipp Nicolai.

De Virgin Mary had a baby boy, the second of Two Christmas Spirituals which Malcolm Sargent arranged, comes from Trinidad and Tobago and was popularised by the West Indian-born singer and actor Edric Connor.

Herbert Howells (1892-1983) composed A Spotless Rose as the second of his Three Carol-Anthems (1918-20). His setting of this anonymous 15th-century poem has completely natural changes of metre and an inspired ending of which composer Patrick Hadley wrote: “I should like, when my time comes, to pass away with that magical cadence.”

Charles Wesley’s text of what we know as Hark! the herald angels sing first appeared in 1739 in the collection Hymns and Sacred Poems. Originally the first line had different words and Wesley intended the tune to be the same as his Christ the Lord is risen today. The now-familiar music originated in a Mendelssohn cantata (celebrating Gutenburg’s invention of the printing press) but in 1815 it was adapted by William H. Cummings to fit Wesley’s words.

We wish you a merry Christmas is a traditional West Country carol which may have originated in the 16th century. What is certain is its connection with the tradition of wealthy people giving treats to carollers on Christmas Eve. Andrew Gant, organist, choirmaster and composer of the Chapel Royal from 2000 to 2013, skilfully incorporates other carol tunes in his exuberant arrangement.

This is a colourful and diverse selection of carols with music from the Sixteenth Century to the present day. There are several pieces with close Chapel Royal or Royal Family connections: Thomas Weelkes was a Gentleman of the Chapel Royal in the Sixteenth Century. Andrew Gant and Richard Popplewell were Organists, Choirmaster and Composers of the Chapel Royal between 2000-2013 and 1979-2000 respectively. Felix Mendelssohn was a close friend of Queen Victoria and Prince Albert and was the music teacher for the Royal children. Recent evidence suggests that Adeste fideles (O come all ye faithful) was written in Latin for The Queen’s Chapel at St James’s Palace (now part of the Chapel Royal). The selection of music is from seven different countries (including Russia, Wales and Spain!). Contemporary composers include Jonathan Dove, Andrew Gant, Andrew Carter, John Rutter, Richard Popplewell and the recently late Sir David Willcocks.

Cover artwork: Watercolour of the Chapel Royal in procession at Christmas (1989) by John Castle
Archive of Chapel Royal