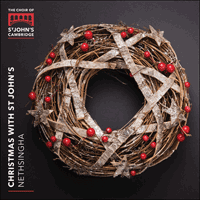 Christmas with St John's presents a typically adventurous programme from this most illustrious of choirs, as new commissions by Judith Bingham and Michael Finnissy join established favourites by the likes of Bob Chilcott and John Rutter.

'This is a highly enjoyable and superbly performed Christmas collection. It respects the traditions of Christmas music but provides plenty of examples of how composers are developing that tradition in exciting ways' (MusicWeb International)

For many people, the pleasures of the Christmas season can be summed up in a single word: tradition. However, perhaps strangely for a world so steeped in the music and practices of centuries past, the English sacred choral scene is as much about the new as it is the old at this time of year; Christmas presents a golden opportunity to present brand new music to wide audiences, and the role played by St John’s College Choir in this area has been significant, as demonstrated by this recording. A contemporary highlight on the disc is the recent St John’s College commission, Michael Finnissy’s John the Baptist, while the programme also includes Bob Chilcott’s The Shepherd’s Carol commissioned by Stephen Cleobury (a former St John’s Organ Scholar) for King’s College Choir, and Creator of the stars of night, composed by another former St John’s Organ Scholar, John Scott.

Bob Chilcott’s exquisite The Shepherd’s Carol (2000) is set to a poem by the English author and playwright Clive Sansom, which deals with the shepherds’ arrival at the stable door. Constantly switching duple and triple time signatures give Chilcott’s theme the same unhurried, easy-flowing vernacular feel as Sansom’s powerful verses, and the overall structure is equally effective; the melody is first presented by trebles alone before the other voices softly enter, one by one, gradually layering a serene pillow of harmonic suspensions. The one fortissimo moment comes at the central climax, when all the vocal parts join in homophony, for the first and only time, to describe the angels’ voices.

Henry Walford Davies’ popular 1913 arrangement of The holly and the ivy sticks to the tune first collected by Cecil Sharpe in Chipping Campden in 1909, but spices it up ever so slightly with the addition of extra dotted rhythms and syncopation.

Whilst appearances of Father Christmas within sacred music are thin on the ground for obvious reasons, William Mathias’s energetic Sir Christèmas of 1969 is exactly that. Sir Christèmas announces Christ’s birth then tells everybody to get drinking, and the music is correspondingly boisterous; the organ part is full of delicious dissonances, whilst the dancing modal melody is harmonised with medieval-sounding fifths and fourths.

Light versus darkness is the theme of Cecilia McDowall’s O Oriens (2012), which sets one of the seven Advent “O” Antiphons. Her music celebrates the rising of the morning star with richly luxurious, suspension-filled harmonic textures.

Perhaps surprisingly, considering its beauty, Adam lay ybounden was the only musical work ever published by Boris Ord, who was organist and choirmaster of King’s College Cambridge between 1929 and 1957. A setting of an anonymous fifteenth century text, it leads us from the fall of man through to our redemption through Christ’s birth to Mary, finishing with thankful praise to God.

Philip Ledger was Organist of King’s College, Cambridge from 1974-82. His A spotless rose (2002) is, like Chilcott’s The Shepherd’s Carol, a beautiful modern example of highly effective word painting. The unharmonised antiphonal lines of its bright B major opening suggest delicate purity. Then, the combination of simple monody and homophonic textures is only broken once, over the carol’s three loudest central bars beginning “to light…the dark…”, set in the tender key of B flat. The spotless rose finally unfolds by means of a series of scrunched chords widening out eventually to return to B major for the clean, bright closing triad.

William Whitehead’s momentum-charged arrangement of The seven joys of Mary (2010) couches the traditional melody in jaunty, and symbolic seven-beats-to-a-bar form and the numerical symbolism continues as the voices build in volume and textural richness through the verses—one voice in the first verse, two in the second and so on—until the sixth, when we suddenly drop down to a quiet solo over held organ chords. Then all voices return, the organ dancing beneath, for the joyful forte concluding verse.

Dormi Jesu, or The Virgin’s Cradle Hymn, sets an anonymous Latin text with its translation by Samuel Taylor Coleridge. John Rutter’s tender lullaby is a classic example of his style, with its final blues-esque chord being an especially lovely touch.

It seems fitting to include a work by John Scott (1956-2015), who was Organ Scholar at St John’s during the time when George Guest ran the Choir and thereafter retained a strong, fond relationship with the choir. Creator of the stars of night (2007) is composed to a text whose origins date back to a seventh-century plainsong hymn, and his warm arrangement retains this plainsong quality.

The words of I wonder as I wander were collected by the American composer and song collector John Jacob Niles from verses sung to him by a young woman in Murphy, North Carolina. So, it feels rather appropriate that this 1996 setting by the Swiss composer Carl Rütti should have melded the English choral tradition with the rhythms and harmonies of jazz and the blues.

British congregations are most familiar with O little town of Bethlehem in its setting to the English folk melody, “The ploughboy’s dream”, but Sir Henry Walford Davies’ smoothly serene version of 1913 has become a much-loved alternative amongst choirs. It begins with a solo treble recitative, of text from the angel’s message to the shepherds in the Gospel of Luke.

It’s something of a mystery as to exactly which sailing vessels I saw three ships could refer to, Bethlehem being a considerable distance from the Red Sea, but no matter. Simon Preston’s delightfully quirky, texturally varied and thoroughly unpredictable arrangement of 1965 capitalises on the original melody’s vivace bounce.

The German composer and poet Peter Cornelius (1824-74) wrote three operas and many songs, but to British audiences he’s best known for The Three Kings, or Die Könige, which is the third of his Op 8 Weihnachtslieder of 1856. We have Franz Liszt to thank for the carol’s masterstroke though, because it was him who suggested that Cornelius juxtapose his original solo baritone melody, composed to his own text, with a piano accompaniment playing the Lutheran chorale, “How brightly shines the morning star”. This more well-known version for choir and soloist was arranged by Ivor Atkins.

Ding, dong! merrily on high first appeared as a French dance tune published in 1588. The English composer George Radcliffe Woodward then attached lyrics for The Cambridge Carol Book of 1910, his fondness for bell-ringing no doubt leading him to hear a peal of bells in its melody. Soon afterwards, Charles Wood added his solidly jolly harmonisation.

Peter Warlock’s pint-sized, gossamer-weighted As dew in Aprylle deserves to be much better known than it is. First published in 1924, much of its charm comes from the delicate chromaticism of the harmonisations, and the constantly changing metre—flitting mostly between five and four beats to a bar—which creates a smoothly flowing feel.

Michael Finnissy composed John the Baptist for St John’s Choir in 2014, and it went on to win a British Composers’ Award. The text is predominantly from the Gospel of St Matthew, the Middle Eastern folk music inflections refer to the location of Christ’s baptism in the Jordan river by St John. The setting’s soft, rapt central chorale forms a visionary moment, interspersed by more lively sections, written in the style of the songs of sixteenth-century Spanish pilgrims from the Jewish diaspora—‘raucous, happy pilgrims’ as the composer put it! The organ interludes are direct transcriptions from Moroccan Berber recordings.

Andrew Carter’s tender lullaby of 1986, Mary’s Magnificat, combines words written by the composer with those of the Magnificat from St Luke’s Gospel. Scored for organ, treble and mixed choir, the three only come together for the final few bars.

Peter Tranchell originally scored his celebratory People, look East (1982) for alto, tenor and bass, but it was later arranged with a treble line by Peter Marchbank. It’s a great fun piece, full of syncopations and changing time signatures, and with a melody full of unexpected twists and turns. The organ part is particularly delightful, strongly reminiscent of light music, and finishing with a humorous cascade of chromatic figures.

Gloucester Cathedral was the original recipient of Mark Blatchly’s arrangement of Franz Gruber’s Silent night. The comforting thirds of his harmonisations, together with the rich, hymn-like textures, reflect his love of England’s Victorian musical heritage. He saves his only fortissimo for the final verse’s climax, sung in German.

Anthony Milner composed his anthem, Out of your sleep arise, in 1959 to a fourteenth-century text. Energetic and full of satisfying contrapuntal textures, its joyful tone is accentuated by Milner’s use of rising motifs, particularly noticeably in the successive ascending scales of “Glory to God in the highest”.

The text of Jesus Christ the apple tree may have its roots in the old English tradition of wassailing. Elizabeth Poston’s serene, smoothly flowing composition of 1967 marries her love of folk song with a traditional four-part hymn style.

John Gardner wrote a substantial number of carols, but it’s his infectiously toe-tapping Tomorrow shall be my dancing day (1965) that has achieved immortality. Bouncing between triple and duple time signatures, its already-lively rhythms accentuated by tambourine and side drum beats, it seems a fitting piece to represent a composer who combined a love of jazz (during the Second World War he served in the RAF as a bandmaster and dance band pianist) with a love of the English choral tradition.