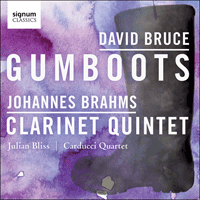 This inspired coupling from Julian Bliss and the Carducci String Quartet presents David Bruce's riotously enjoyable Gumboots—an evocative affirmation of the power of music against the odds—alongside Brahms's timeless Clarinet Quintet, the undisputed masterpiece of the genre.

'Bruce's piece pivots on the contrast between its elegaic first movement and the five dances that follow it, and Bliss and the Carduccis relish the expressive variety' (The Times)» More

There is a paradox in music, and indeed all art—the fact that life-enriching art has been produced, even inspired by conditions of tragedy, brutality and oppression, a famous example being Messiaen’s Quartet for the End of Time, written while he was in a prisoner of war camp. Gumboot Dancing bears this trait—it was born out of the brutal labour conditions in South Africa under Apartheid, in which black miners were chained together and wore gumboots (wellington boots) while they worked in the flooded gold mines, because it was cheaper for the owners to supply the boots than to drain the floodwater from the mine. Apparently slapping the boots and chains was used by the workers as a form of communication which was otherwise banned in the mine, and this later developed into a form of dance. If the examples of Gumboot Dancing available online are anything to go by, it is characterised by a huge vitality and zest for life. So this for me is a striking example of how something beautiful and life-enhancing can come out of something far more negative. Of course this paradox has a far simpler explanation—the resilience of the human spirit.

My Gumboots is in two parts of roughly equal length, the first is tender and slow moving, at times ‘yearning’; at times seemingly expressing a kind of tranquility and inner peace. The second is a complete contrast, consisting of five, ever-more-lively ‘gumboot dances’, often joyful and always vital.

However, although there are some African music influences in the music, I don’t see the piece as being specifically ‘about’ the gumboot dancers, if anything it could be seen as an abstract celebration of the rejuvinating power of dance, moving as it does from introspection through to celebration. I would like to think however, that the emotional journey of the piece, and specifically the complete contrast between the two halves will force the listener to conjecture some kind of external ‘meaning’ to the music—the tenderness of the first half should ‘haunt’ us as we enjoy the bustle of the second; that bustle itself should force us to question or revaluate the tranquility of the first half. But to impose a meaning beyond that would be stepping on dangerous ground—the fact is you will choose your own meaning, and hear your own story, whether I want you to or not.

I am always on the lookout for new and exciting music, especially when it comes to chamber works. A year or so prior to recording this album a music festival asked me if I would play David Bruce’s piece, Gumboots. When I listened to it I thought it was fantastic and exactly the sort of piece that really interests me—exciting, challenging and fun for the audience. David had managed to create such evocative music, inspired by Gumboot Dancing—a form of secret communication developed by miners, chained together while they worked in brutal conditions in the flooded gold mines of South Africa, under Apartheid. I got in touch with David and found out that we only lived a matter of minutes from each other, so we decided to meet at a local pub and talk through the piece. This was to be my first foray into the world of bass clarinet, something I’d always wanted to explore. After the first performance and after seeing the audience reaction I decided that I had to record this piece, not only because I wanted to, but because I thought everybody should hear it! Pairing it with Brahms’s Quintet was quite a natural choice and one that David and I discussed quite a bit. Whilst they seem polar opposites, they work really well together. I really liked the idea that people will be familiar with the Brahms, and will hopefully enjoy our rendition of such an iconic work, whilst also having the opportunity to discover what I believe is a great addition to the chamber repertoire.

Working with the Carducci Quartet was and always is an absolute pleasure. We get on well which helps when you’re in a recording studio together for a few days! What has always struck me when I play with the Carduccis is their ability to make the quartet at times sound like one instrument, one voice. Their attention to detail is unlike any other.

So here we have it, something old and something new; something familiar and great, and something fresh and innovative. I hope you enjoy discovering Gumboots and end up loving it as much as I do. Thanks David for writing a corker!