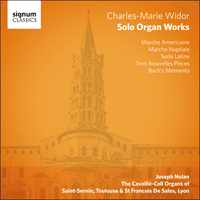 Joseph Nolan follows his five acclaimed volumes of the Organ Symphonies of Charles-Marie Widor with a collection of the composer’s other works for solo organ.

‘In the death of Charles-Marie Widor. Paris has lost one of her oldest and most distinguished musicians […] Many of the younger French composers have studied in Widor’s composition classes […] As will all real personalities, he had his little prejudices, and if one of his pupils recalls some such remark as this, 'The harp? I’d hardly call it an instrument—just a lot of exasperated toothpicks,' he nevertheless will refer to his master with affection and esteem’ (New York Times, 18 April 1937). Born in Lyon, protegé and champion of Cavaillé-Coll and his era-defining empire and république organs, indelibly associated with Saint-Sulpice and the Paris Conservatoire, inventor of the symphonie pour orgue, supreme improviser, his skills as a player dazzled a long generation. ‘He could be majestic with grandiloquence, elegant without affectation, austere without coldness, fiery while remaining absolute master of the rhythm’ (Vierne). One of his many beliefs was that ‘the clarity of a work is a result of the sincerity and the force of the idea that gives it life; but, to be complete, it exists also in an exact replication of its essential elements, its expressive details, and their mutual subordination’.

‘The most open and most understanding professor […] One day I presented […] a score that excited him. He invited me to lunch’ (Varèse). Despite a willing eye for ‘the daughters of Eve,’ he married late in life, in 1920, his bride an aristocratic woman thirty-nine years his junior, ‘heiress of a great name and an imposing fortune’ one of whose ancestors had been nurse to Louis XV—Mathilde, Mademoiselle de Montesquiou-Fezensac.

Contemporary with early Sousa, garnished with a dash of Parisian Left Bank belle époque, the rousing A minor/major Marche américaine, Op 31 No 11, comes from a set of twelve Feuillets d’album for piano (1876), dedicated to a young American woman, Leila Morse—Cornelia ‘Leila’ Livingston Morse [Rummel] (1851-1937), youngest daughter of Samuel Morse the inventor. In 1923 Widor orchestrated it for Walter Damrosch. The present transcription by Marcel Dupré (1886-1971) dates from 1939.

Serving to remind that Widor’s copious catalogue embraced mediums well beyond the organ bench, the Marche nuptiale in F (1890) closes some incidental music he wrote for a production of Auguste Dorchain’s poème/four-act comedy Conte d’avril (April tale) at the Théâtre de l’Odéon, 12 March 1891. Loosely based on Shakespeare’s Twelfth night, this play, then with ‘only a minor score’ (Near), had first been staged at the this venue in September 1885, two weeks before Bizet’s L’Arlésienne. But for the ten-performance 1891 run, Widor noted, ‘the director and poet asked me for a little bit of [added, revised] symphony "to put the audience in a lyrical mood"‘. Believed by critics to have ‘made the play’s reputation’ (Ménestrel), ‘expanding the repertory of drames lyriques’ (Les temps), compared with L’Arlésienne, Mendelssohn’s A Midsummer night’s dream and Beethoven’s Egmont, and benefitting from the Orchestre Lamoureux in the pit, the music was well received (and not only in France), with Édouard Colonne extracting two orchestral suites and conducting the complete score at the Châtelet, 15 November 1891. The Marche nuptiale had its origins in the third number of the second edition of the Six Duos for piano and harmonium, Op 3, published (judging from the plate number) around 1889. Starting demurely, Andantino, rising to a glowing, exultant finish, fff, Widor’s organ arrangement appeared in 1892. Recessional music to rival the best.

Premiered by Widor on the Madeleine’s newly restored Cavaillé-Coll, 13 January 1928, the Suite Latine, Op 86 (1927)—‘Latine’ in the religious rather than Respighi understanding—was inspired by the devotion and support shown him by his American student, the Bach scholar Albert Riemenschneider (1878-1950). Rivalling Shaw’s pithiness across the Channel, one French critic the morning after was lost for words—‘Maître Widor played the organ: that says it all’ (Gaulois). Riemenschneider considered it ‘the wonderful product of a man old in years, but who seems to keep eternally young through his work and interest in the progress of others’. Marcel Dupré, a former (pre-War) composition student at the Conservatoire, found within its leisurely, cultured pages ‘a definitively purified and spiritualised sentiment’. Like the last two organ symphonies (Gothique, Romane, 1894/99), three of the movements draw on Gregorian plainchant. II Beatus Vir, ‘Blessed is the man’ (Psalm). E flat major, Andante. IV Ave Maris Stella, ‘Hail Star of the Sea’ (Marian vespers hymn). D minor, Andante moderato molto. VI Lauda Sion [Salvatórem], ‘Sion, lift up thy voice and sing’ (Sequence). C minor, Tempo di marcia).

The Suite Latine featured with the Gothique in Widor’s last foreign concert, in Salzurg Cathedral opening the 1932 Salzburg Festival (31 July). His proximity to the greats of the pastùWagner, Liszt, Verdi—caught everyone’s imagination. ‘How lyric the Suite Latine, of which the Adagio [fifth movement] evokes a brother of Bruckner, for Widor has also known him.’ The critic Felix Aprahamian, as a boy of nineteen, heard Widor play this same piece at Saint-Sulpice the following year. ‘It was a revelation for the youngster: instead of adding and subtracting stops at every crescendo and diminuendo, Widor simply opened or closed the swell box’ (David Aprahamian Liddle, February 2005).

A quarter-of-a-century separates the last of Widor’s ten organ symphonies, the Symphonie Romane, and Bach’s Memento, a suite of free paraphrase-transcriptions without opus number. Giving the first performance on 30 June 1925, he wrote the set to inaugurate a three-manual Jacquot-Lavergne instrument in the Salle du Jeu de Paume of the Conservatoire Américain, Fontainebleau – of which post-war ‘summerschool’ institution he was director, Nadia Boulanger lending support on the teaching staff. ‘I have recently “orchestrated” six pieces of Bach for organ […] drawn from the harpsichord [sic] works or the cantatas,’ he informed Albert Schweitzer, 13 August 1926. ‘I wrote just five […] originally, but I did the sixth because the number five is lame.’ The most ‘direct’ homage of his entire catalogue to the composer whose works ‘had been the cantus firmus of his whole life’ (John R Near), it pleased some but offended others. Especially Joseph Bonnet, a former student of Guilmant’s and founder, in 1921, of the organ department at the Eastman School of Music, Rochester. ‘In this collection,’ he vented—undeterred that ‘taking the elder statesman of French music to task […] was tantamount to questioning papal infallibility’ (Near) – ‘some noble pieces of Bach are mercilessly deformed and gain nothing from these tasteless treatments.’ A century on, faced with the intimate contemplation, chess-play and ascending grandeur of these pages, we beg to differ. I Pastorale. C minor, Allegretto, flute/oboe. Source: Pastorella BWV 590, third movement (Weimar c 1710). II Miserere mei domine. F sharp minor, Lento. Forty Eight I:vi, Prelude in D minor, BWV 851 (Cöthen 1722). III Aria en e-moll. E minor, Adagio. Forty Eight I:x, Prelude in E minor, BWV 855 (1722). IV Marche du beilleur de nuit (March of the night watchman). E flat major, Moderato. Cantata 140, ‘Wachet auf, ruft uns die Stimme’ (Leipzig, 1731 [Lutheran hymn, 1599]). ‘Awake, the voice is calling us.’ V Sicilienne. E flat minor, Andantino. Flute Sonata BWV 1031, second movement, attributed Quantz/CPE Bach—the adagio of Mozart’s A major Concerto K 488 ever prescient. VI Mattheus-final. C minor, Andante. St Matthew Passion, BWV244, closing chorus (Leipzig 1727).’Wir setzen uns mit Tränen nieder’, ‘We sit down in tears/And call to thee in the tomb’.

The Miserere mei domine was included in Widor’s final recital on the ‘operatic period’ Cavaillé-Coll at Saint-Sulpice, 19 April 1934, aged ninety. ‘A musician whose name honours French art and towards whom a testimony of respectful and fervent admiration was shown’ (Ménestrel).