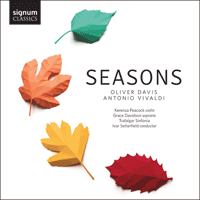 Seasons combines Vivaldi’s perennial 'Four Seasons', performed with flair by the Trafalgar Sinfonia and soloist Kerenza Peacock, with a new composition by British composer Oliver Davis. Inspired by the set of sonnets upon which Vivaldi based his work, Anno is a beguiling composition for orchestra and solo soprano. 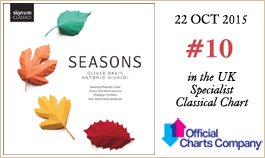 Anno
In September 2014 Ivor Setterfield and I discussed the concept of an album based around Vivaldi’s Four Seasons incorporating a complementary original work, perhaps for voice and strings. I decided to look for poetry based on the seasons and then set this in the form of a song cycle. Whist researching potential texts I soon discovered (as many already knew) that Vivaldi had based the Four Seasons on four existing poems; in fact some believe the poems to be by Vivaldi himself, since they very conveniently support the structure of the four concertos.

For the recording with Trafalgar Sinfonia Ivor suggested we approach soprano Grace Davidson and I was of course delighted when she agreed to record the work. To complete the disc I wrote an additional short piece, Anno Epilogue. This quotes one of the key themes of Anno but in a more reflective mood. We recorded at All Saints, Orpington on March 4th, coincidentally Vivaldi’s birthday!

The Four Seasons
A dashing figure with long, flowing auburn hair and boyish good looks, Vivaldi was the musical pin-up of Baroque Venice. His vast musical output includes an astounding 500 plus concertos, 86 solo and trio sonatas, some 46 operas and a substantial quantity of vocal music. He originally studied for the priesthood and received Holy Orders in 1703, earning the nickname ‘Il prete rosso’ (‘the red priest’) on account of the distinctive colour of his hair. Yet following his ordination, Vivaldi turned his back on the church and went in search of ‘worldly’ musical employment. Just a few weeks later he was appointed maestro di violino at the Pio Ospedale della Pietà, one of four orphanages for girls in Venice. This was to remain his musical base for the greater part of his life, and it was for the highly gifted students at the Pietà that he composed much of his music.

The Four Seasons forms the first third of a collection of twelve violin concertos published together in 1725 as ‘Opus 8’ with the overall title Il cimento dell’armonia e dell’inventione (‘The Trial of Harmony and Invention’). The concertos broke new ground not only in terms of their detailed depiction of poetic ideas, but also their technical ingenuity—most noteworthy in this regard are passages of rapid string-crossing with the bow and high-flying virtuosity for the left hand.