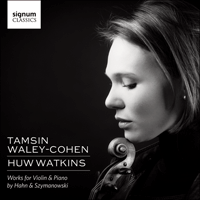 Tamsin Waley-Cohen and Huw Watkins perform two important violin sonatas—by the Polish composer Karol Szymanowski and one by the the Venezuelan-born naturalized French composer Reynaldo Hahn—as well some some charming but more slight contributions to the violin and piano repertoire.

'Waley-Cohen's playing is radiant and soaring, and Watkins's pianism a model, as always, of sensitivity' (The Sunday Times)» More

At first sight, even perhaps at a first hearing, there would appear to be little—if anything—to connect the Violin Sonatas of the Polish composer Karol Szymanowski with those of the Venezuelan-born naturalized French composer Reynaldo Hahn—but there is. The connecting musical thread, albeit a somewhat tenuous one, stems from the extraordinarily original single Violin Sonata of the 19th-century Belgian-born master César Franck, who—like Hahn—spent much of his adult life in France, and is counted a master of the French school.

Franck’s influence runs deep in much French music of the belle époch, that period of 40-odd years between the end of the Franco-Prussian war of 1870-71 and the outbreak of World War I in 1914. Although Franck’s influence is not to be found in operatic works, the strength of this influence (to which we refer in French music as the dawn of the 20th century) can be rather less clearly heard in music for the concert hall. Franck’s evolutionary thematic transformation, amounting at times to what may be termed cross-thematicism (the variation of a single musical idea across various movements in a work), may have had its roots in Liszt and Wagner, but was itself transformed through its use in instrumental music, which seemed to be ‘in the air’ so to speak in France during that era. Franck’s magnificent Violin Sonata of 1886 is itself the exemplar of such works.

Other, non-musical, coincidences link Szymanowski and Hahn. Although the former is the younger man, and is today correctly claimed as a Polish composer, he was born in the village of Tymoszówka, then in the Kiev Governorate of the Russian Empire (now Tymoshivka in Cherkasy Oblast, Ukraine). And Hahn, the youngest of twelve children, left the Venezuelan capital Caracas with his family at the age of three for France, five years before Szymanowski was born: thereafter, for all the world, Hahn is correctly considered a product of the French school, although he did not actually become a naturalized French citizen until he was 35.

Both men were gifted writers, and not solely on musical subjects, although the complete manuscript of Szymanowski’s novel Efebos was lost in Warsaw in World War II (just one chapter has survived). Both were homosexual—Hahn’s most famous lover being the novelist Marcel Proust. Of the two, it was Reynaldo Hahn who led the more cosmopolitan existence, appearing professionally in concert, as well as on disc, as a composer, conductor, pianist and possessor of a trained and well-modulated baritone voice. But despite whatever Bohemian aspects of their daily lives might have run parallel (there is no firm evidence they ever met), it is the quality of their music that unites them on this disc.

Szymanowski’s sole Violin Sonata, in D minor, Op 9, predates Hahn’s by 22 years. It was composed in 1904, and is dedicated to Bronisław Gromadzki, an amateur violinist and close friend of the composer. Written when Szymanowski was just 21, it remained unplayed for five years until it was at last taken up, and very successfully premiered, by Paweł Kochański (later known as Paul Kochanski) and Arthur Rubinstein in Warsaw in April 1909.

Szymanowski’s Violin Sonata falls into three movements: Allegro moderato, patetico; Andantino tranquillo e dolce – Scherzando – Tempo primo; Finale: Allegro molto, quasi presto. The overall shape of the work adheres to what might be termed a relatively standard ground plan, although the insertion of the 3/4-6/8 Scherzando in the slow movement is a highly appealing touch. The language at this stage of the composer’s career had not fully absorbed those influences, which are occasionally discernible, from the music of Richard Strauss, Alexander Scriabin and especially César Franck—whose evolved ‘cross-thematicism’, which often used to be referred to as ‘cyclic’ composition, is recalled, albeit treated in a manner more familiar from that of Szymanowski’s later, more individually mature, style.

It should not be thought that Szymanowski’s assured and confident Sonata is a pale reflection of Franck’s earlier work, although it may be claimed that the later work would not have taken its cohesion and nature without the existence of the former, or its relatively youthful confidence from Richard Strauss’s sole Violin Sonata, Op 18, for the themes of all three movements are very subtly related cross-thematically. Such was the success attending the premiere of this work that the middle movement had to be encored at once.

The significant impact the Sonata made, from its hugely successful premiere, played a major part in the establishment of Szymanowski as a figure from whom much was expected—and he did not disappoint. In turn, Szymanowski remained faithful to his interpreters: within a few years of the Sonata’s premiere, Szymanowski planned a Violin Concerto, and sought Kochański’s assistance in the layout and practicability of the solo part. In the event, Szymanowski dedicated the Concerto to Kochański, who not only gave the premiere of that work but also composed the Concerto’s cadenza.

Nor is that all with regard to either Kochański’s or Rubinstein’s association with Szymanowski: at the time the composer was writing the Violin Concerto, he completed a new work for violin and piano, Nocturne and Tarantella, published as his Op 28. This was written whilst Szymanowski was staying on Józef Jaroszyński’s estate in Zarudzie and also in Ryżawka, the estate of August Iwański. It was to Iwański that the work is dedicated. The composition of Szymanowski’s Op 28 took place during the spring and summer of 1915, although it is said to have been initially sketched in a single evening. The finished work was first performed by Paweł Kochański and the composer’s elder pianist brother Feliks in Warsaw on 24 January 1920. Whilst manifestly by the same composer as the Sonata Op 9, the Nocturne and Tarantella displays a greater individuality, and indeed a greater range of influence with a faint yet apparent Iberian atmosphere.

We might mention that Kochański went on to enjoy a greatly significant career, later giving the premieres of a number of important works by other composers, but his career was brought to a end prematurely from cancer at the age of 43. During the later stages of his illness, Kochański assisted Szymanowski in the composition of a Second Violin Concerto, which was completed after his death in 1934, and dedicated once again, posthumously, to the violinist. Szymanowski’s Fourth Symphony, the Symphonie concertante for piano and orchestra (1932), is dedicated to Rubinstein, who made the first recording of the work 1952.

For Reynaldo Hahn, the 1920s had moved far away from the world of the belle époque into which he had grown up and reached his musical maturity at the Paris Conservatoire, whose director, Jules Massenet, encouraged him greatly. Hahn later wrote that 'Never, never did Massenet impose his own ideas, preferences or style on any of his pupils. On the contrary, he identified himself with each of them, and one of the most remarkable features of his teaching was the faculty of assimilation he showed when correcting their work.' It is not without interest that Massenet dedicated his song Petite Mireille (1899) to Hahn, writing in turn of Hahn that ‘he is a man of the utmost refinement, combining with musicianship the qualities of a scholar and a man of letters.’ Some idea of Hahn’s dedication to scholarship may be gleaned from his devotion to the operas of Mozart, and his own widely-admired conducting of them, in an era which did not regard those works with the universal admiration that later generations have bestowed.

We have mentioned Hahn’s wide-ranging musical activities, and—like Massenet—he appeared to be able to work consistently under high pressure, yet a study of his many works shows that any feelings of intensity of expression, of any aspects of musical neurasthenia, are absent. Indeed, in hearing such works as Hahn’s Sonata for Violin and Piano in C major of 1926-7, composed (as the note at the end of the published score states) in Nice, Toulon and Paris, we may well feel that Massenet’s assessment of his pupil, almost 30 years earlier, was correct: the ‘utmost refinement’ Massenet divined in Hahn’s work runs consistently through the score.

The Sonata opens with a deceptively simple lyrical theme in the clearest C major on the violin, against flowing supporting triplets from the piano; the deception is that, as the theme progresses, the tonality is subtly shifting, eventually arriving at the second subject in G flat—the furthest possible key from C major. Again, Hahn’s compositional subtlety is at work in enharmonically treating G flat as F sharp, the leading note of G, the dominant of C. Thus, with what may appear to be the simplest of compositional stratagems, Hahn has spread the widest tonal spectrum with the simplest of means—a touch that would surely not have been lost on Massenet.

By opening with a theme of great simplicity but taking it far and wide, Hahn prepares us for further surprises, not least the second movement, a fast Scherzo in G minor, also full of quicksilver changes, preparing us for a finale in which, we might come to expect, almost anything can happen—at least, in harmonic and tonal terms. And so it does: in this movement, Hahn takes us on the most wide-ranging yet subtlest of musical journeys, seemingly coming to a half close on a quiet, deep G sharp underpinned by the piano: in turn, that G sharp is the dominant of C sharp—so near, yet so far, from the simple opening of the work—and a simple fall to C major brings us full circle in a manner that César Franck (and Massenet) would have applauded, for now the first subject of the first movement can return, ending this wonderfully lyrical masterpiece in a beatific mood of completion, the final cadence.

What is so remarkable in Hahn’s output is that the year 1926 saw him unveil two significant theatre works, the musical comedies Le temps d’aimer in three acts, and Une revue in one act, alongside two vocal concert works and of course the Violin Sonata. This followed the extraordinary success of Hahn’s operetta Mozart of 1925, based on a factional account of the young composer’s visit to Paris in 1778.

Hahn’s Violin Sonata is his largest work for violin and piano, but among his shorter pieces for the combination are Nocturne in E flat, from 1906 and the Romance dating from 1901—both of which further attest to Massenet’s view of this exceptionally gifted and refined creative figure.