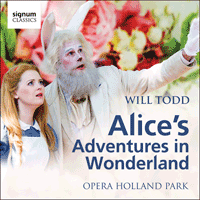 11-year-old Alice lives in the not terribly exciting town of Grimthorpe. On a boring Wednesday in the summer holidays Alice’s family, wandering around town, gets caught in a downpour. They rush into the nearest shelter, which turns out to be a pet shop—much to Alice’s parents’ delight. Alice is lost in a daydream of exotic holidays … suddenly she is jolted out of her reverie by one of the animals—a white rabbit—who starts talking to her …

Opera Holland Park’s production of Alice’s Adventures in Wonderland, a family opera by composer Will Todd and librettist Maggie Gottlieb, is here recorded for the first time after two critically praised runs in 2013 and 2014. 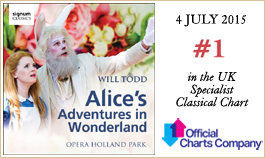 'Like most judicious entertainment for children, Todd's opera is nimble on its feet (69 minutes) and relying on quick changes of mood, colour and content to stop young minds from wandering … every number is different, ranging from soprano coloratura fireworks for a singing bottle … to—by far the best—the Caterpillar's Wonderland Blues, which Keel Watson turns into a showpiece cameo' (Gramophone)
'The label “opera” gives the wrong impression. Although it is sung the whole way through, the score’s idioms range from bluesy jazz and big band swing to West End musical … Flur Wyn makes a delightfully pert Alice, and the rest of the cast presents vivid characterisations of the familiar caricatures' (The Daily Telegraph)
'Skilfully and more or less seamlessly he blends Broadway ballad … jazz and blues into an opera that has all the good things about the form with none of the vocal pomposity that children find ridiculous. On record, all the words are crystal clear. The wordplay is tart and taut … and vibrantly delivered by the cast' (The Times)

It’s fitting to be nervous when you try to turn a literary classic into something else—a play, a film, an opera. How should you approach something as iconic as Lewis Carroll’s Alice in Wonderland?

Maggie Gottlieb, the librettist who wrote the opera with Will Todd, says:

When we were commissioned by Opera Holland Park back in 2012, we thought there were three main issues. First we needed to ask ‘why are we making this into a musical piece?’. Second, the characters are sacred—and they are also the greatest gift you could have. The last was that the Alice books are really a succession of episodes, not obviously connected or linear, something that it is hard to make work on stage, particularly for an audience that includes children. So while you really want to use plenty of those episodes—both because they are funny and because the audience would go crazy if you didn’t—you also need to join them up into a narrative. But really, my job was easypeasy—I was just building the framework on which Will could create his musical Wonderland.

'You basically try to create something that is not too unworthy of the original', agrees the composer:

When I first met James Clutton and Sarah Crabtree, the producers of Opera Holland Park, in 2012, I had no idea what they were going to ask me, and it was a surprise when they mentioned Alice—it’s daunting to take on a book that is so well known and loved. My starting point was to try to find a musical character for Alice, the only real ‘human’. So we began with Alice’s song, which eventually became ‘I flew high in my dreams’, the moment in the show when she is at her most anxious, but also the moment where she realises ‘the world is bursting with wonder!’ Then I looked for a language for Wonderland, something slightly eerie and chromatic and uneasy, a completely unfamiliar place where all these fantastic characters could spring to life.

For an opera, Todd’s score sounds pretty jazzy, with interludes of blues and swing:

I wanted to make it musically various. For one thing, we didn’t want to be boring. Maggie wrote words that lend themselves brilliantly to the characters—of course the caterpillar would sing the blues! The characters are really individual, and they need their own characterisation in music. I like to let the audience relax in a familiar musical idiom so that they can get into the words and action without fretting about missing something. And at the same time there are many lyrical, more traditionally operatic episodes where the music and emotion and action are very closely intertwined.

The musical texture I chose, the style and scoring, was a result of where the opera was going to be performed: on a lawn surrounded by woodland in Holland Park, with a number of different ‘stages’ where the action moves from scene to scene—with the audience moving too. So we needed a mobile band, and also one which would sound good outdoors, would be jolly and characterful without drowning the singers.

That’s where the 'Victorian Quartet' comes in too—a foursome of argumentative and not very intelligent characters who react to the action, and lead the audience to the next location around the lawn.

Contemporary opera is not an easy form, but when Opera Holland Park commissioned this piece they were making a point about the future of the company and about their belief in the artform. 'In our theatre we stage masterpieces from 400 years of opera', says Clutton; 'but we also believe that we should contribute to present-day opera by performing contemporary works and by keeping in touch and developing the audience. What better way could there be than creating a new work designed especially for families? New opera can be a genuine delight, and the children who come will grow up thinking that going to an opera might, after all, be quite a normal thing to do!'

Will Todd and Maggie Gottlieb’s Alice’s Adventures in Wonderland is entering on its third season of performances in Holland Park in 2015, with more productions planned further afield in future too, including at The Royal Opera’s Linbury Theatre. The writers have captured the glee and madness of Lewis Carroll’s creations, and brought his characters vividly to life in a musical world of great charm. 'Our Alice opera is totally a homage to Lewis Carroll’s books and characters', says Will; 'if we have made them alive in music on the stage in a way that doesn’t belittle them, we are happy!'

11-year-old Alice lives in the not terribly exciting town of Grimthorpe. On a boring Wednesday in the summer holidays Alice’s family, wandering around town, gets caught in a downpour. They rush into the nearest shelter, which turns out to be a pet shop—much to Alice’s parents’ delight: now the children will be kept entertained for a while by the animals. Alice’s gluttonous siblings start making plans to eat the pets, while Alice is lost in a daydream of exotic holidays … Suddenly she is jolted out of her reverie by one of the animals—a white rabbit—who starts talking to her …

Things quickly get out of hand and Alice, chasing after the rabbit, falls down a rather deep hole. She emerges into Wonderland; and in this fantastical place Alice comes across a number of peculiar characters, including a highly-strung drinks-container, an egg-stremely pompous teacher, a very relaxed caterpillar, a happy cat, a depressive hare, a mad hatter and a dozy dormouse, and learns that all is far from sunny in Wonderland: a mysterious (and very cross) Queen of Hearts seems distressingly keen to chop off everyone’s heads …

The Queen interrupts a not very jolly tea-party and hauls everyone off under guard (except Alice) to slave away in her evil sweat-shop making teatime treats. Alice, with the help of a chivalrous but impractical white knight and a romantic, forgetful duchess, has to cook up a plan to rescue the others and deal with the unstable Queen …