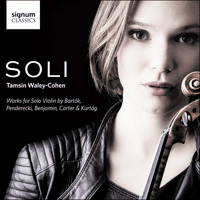 'Waley-Cohen's devotion to her cause is palpable, and her interpretative flair likewise' (The Sunday Times)» More

Every musical genre has its own aura, its own tradition, its own signal masterpieces. Where the unaccompanied solo violin is concerned, the magnetic poles are Bach’s set of three each of sonatas and partitas, then Paganini’s collection of twelve caprices. During the century after Paganini these works remained without successor, ready to guide and focus composers who came so much later.

With Bartók the connection to Bach, in particular, is clear. So is the connection to the violin, for which he wrote two mature sonatas with piano (plus a student piece that is by no means negligible), two concertos, six quartets and other chamber pieces. However, he might never have composed for violin alone without the encouragement of Yehudi Menuhin. Menuhin, who had been led to Bartók by Antal Doráti, a former pupil of the composer’s, had programmed both the Second Violin Concerto and the First Violin Sonata for the autumn of 1943. Before performing the latter he arranged to meet Bartók, who duly attended the recital, at Carnegie Hall, at which the renowned violinist also played the Sonata in C from the Bach set. Bartók immediately accepted Menuhin’s commission for a similar solo piece, on which he worked during a winter stay in Asheville, North Carolina. He completed the sonata in March 1944, and Menuhin gave the first performance on November 26 that year, again at Carnegie Hall. With only ten months left to him, Bartók worked on his Third Piano Concerto and Viola Concerto, but the Sonata for Solo Violin was the last work he finished.

The Bach piece he studied most closely would seem to have been the Sonata in G minor, which he followed in matters of tonality (even if his G minor is some way from Bach’s) and form, putting a fugue in second place and a slow movement in B flat third—though the chaconne rhythm of his opening movement surely nods to the monumental finale of Bach’s Partita in D minor. This is the rhythm of the first subject, and it returns emphatically at the start of the development section and again in the recapitulation, with more flowing material in contrast. Venturing away again from the smoother harmony of his Concerto for Orchestra, Bartók spikes his motifs with fourths and seconds.

They persist—though the fugue subject of the second movement starts out from a bold rising minor third, also including gaps that invite dialogue treatment, as in the passage about halfway through where the theme, arco, is in canon with itself in inversion, pizzicato. The fugue is in four parts, but often, as in Bach’s solo string music, one or more will be only implicit.

The ensuing ‘Melodia’ is based on a theme related to the first movement’s second subject. In ternary form, the music has a muted middle section of rustlings and tremblings such as Bartók himself categorized as night music. The reprise, very much altered, closes in harmonics.

In final place comes a perpetuum mobile, where Bartók introduced microtones as an option. The activity breaks off for two episodes of folk-style fiddle playing, pentatonic and then diatonic.

Coming forward forty years, Krzysztof Penderecki’s Cadenza was written in 1984, when the composer was well into his more sober, neo-Romantic phase and had left behind the novel string effects of his youth. A cadenza is normally an unaccompanied dazzle in the midst of a concerto, especially a first movement, and this one certainly rises to the challenge. It begins, however, as if recalling that a cadenza is in origin a cadence, a fall, falling as it does through a minor second, from A flat to G, the instrument’s lowest note. Out of this comes a scalewise melodic motif that is developed mightily before the piece returns whence it came.

Later yet, all written around the turn of the millennium, are the pieces by George Benjamin, Elliott Carter and György Kurtág, Benjamin’s Three Miniatures dating from 2001. All were written for friends: the violinist Jagdish Mistry, whose daughter receives a lullaby; the music publisher Sally Cavender, Benjamin’s staunchest advocate; and Klaus Lauer, who presented concerts of new music at his hotel in Badenweiler, where the three pieces had their first complete performance at the hands of another friend, Irvine Arditti. According to the composer, they all explore ‘different facets of the same compositional technique’, which perhaps has to do with a modality rooted in the instrument’s tuning and with canonic processes not limited to the second piece. The first is a sombre melody with double stops and accompanying open strings, lifting off into the upper air of harmonics. ‘A Canon for Sally’, as canons will, mixes constraint and freedom. In the finale, delicate pizzicato music prefaces and accompanies the song.

The two Carter pieces come from his set of Four Lauds, honouring musicians whose friendship he enjoyed for many years. ‘Statement – Remembering Aaron’ (1999) is a tribute to Copland, which, Carter said, ‘suggests the warmth and generosity and nobility’ of his character and also includes ideas from his Ukelele Serenade, an early jazz-style piece for violin and piano—worked, however, into music of reach and grandeur. Improvisatory and passionate, ‘Rhapsodic Musings’ (2000) was an eightieth-birthday present for Robert Mann, who, as leader of the Juilliard Quartet, played an important part in establishing Carter’s quartets in the repertory. His initials are planted in the title and also in the music, as re-mi (i.e. D-E in tonic solfa), these notes often placed together as a gruff discord.

With both these composers, Benjamin and Carter, the solitary violin is a challenge simultaneously to technique and imagination, as it was for Bach—a challenge to create something that is at once structure and poem, something that also seems to spring out from the nature of the instrument. It is the same with Kurtág, who, in parallel with his vast array of Games for piano, put together a large collection of Signs, Games and Messages for solo string instruments and small groups, the violin volume containing pieces written between 1989 and 2004.

The dimensions are those of a telegram, an inscription or, indeed, a postcard—‘A Postcard to Anna Keller’ (1993) as it might be, which was dashed off, a scrap of a children’s song, on the day the dedicatee was born, her father being the violinist András Keller.

‘In nomine all’ongharese’ (2001) was Kurtág’s contribution to a festoon of pieces commissioned for the festival of new chamber music at Witten, all based on the polyphonic model that had stimulated English composers from Taverner to Purcell. Kurtág’s meditation, originally for cor anglais, must bear some hidden relation to that source, but the second part of the title is more in evidence, as the line moves through steps worn smooth by Hungarian folk song—ultimate source and ultimate standard for this composer, as for Bartók.

‘In memoriam Tamás Blum’ (1995) is also an adaptation, of a piano piece remembering a friend who, forty years before, conducted the first performance of the composer’s Viola Concerto. Often Kurtág’s memorials are written in despite of death; this is one of his fiercest and most touching.

Another recurrent type among Kurtág’s instrumental inventions is the homage. ‘Hommage à John Cage—Faltering Words’ (1987, rev. 1991) has the violin trying to enunciate and failing, time and again.

By contrast, ‘Hommage à J. S. B.’ runs continuously through widening circles, though eventually it, too, starts to falter. This is the piece Kurtág placed first when publishing his violin pieces, and of course it hails as well across the centuries to one of the prime movers of the solo violin repertoire.

Finally, ‘…féerie d’automne…’ is again a broken line, played with a practice mute One might think the fairies had been overhearing plainsong, and not known what to make of it.

There is nothing like the experience of being completely alone on stage, just with my violin. It is the ultimate soul-baring communion both with myself and with the audience. And it is no coincidence that many of the works written for solo violin explore the depths of our shared human experience through this intense medium.

For musicians, composers and performers alike, sound is our medium. Through sound we must express everything we wish to communicate. The works on this disc take the violin to its expressive limits. The technical demands on the performer are always in the service of heightened expression, whether of ecstasy, pain, doubt, loneliness, desperation, or acceptance and peace. For me, this is at the heart of why I play the violin, and why I play music, to explore our inner life through the language of sound.

Each composer on this disc displays a great depth of knowledge and understanding of the instrument, not only how it can be played, but of how natural resonances interact, uniting or jarring or distorting, often using the open strings as building blocks. Although there are moments when the writing is at the edge of what is playable, it is always possible, and the struggle can even add to the content.

The recording process was extraordinarily intense, not only because I was alone in the hall. The emotional rawness of the material took its toll each day, so in the evening, to play a Kurtág miniature was a wonderful balm. I would like to say an enormous thank you to Nick Parker and Mike Hatch who produced and engineered this disc, and for the invaluable support they gave during the recording sessions.