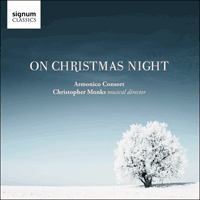 Armonico Consort return to disc on Signum with a festive selection of classic carols and hymns alongside new commissions and arrangements. The programme is rounded off by Benjamin Britten’s timeless A Ceremony of Carols.

'Christopher Monks, conducting the Armonico Consort, presents a festive selection of classic carols and hymns alongside new commissions and arrangements. The programme is rounded off with a dynamic account of Benjamin Britten's timeless A Ceremony of Carols. Highly recommended' (The Northern Echo)

The word ‘carol’ or rather ‘carole’ is of medieval origin from French and Anglo-Norman tradition and usually meant a dance-song or circle dance accompanied by singing. In French, the equivalent word is Noel and in German, Weihnachtslied, both of which mean a song for Christmas. It became closely associated with the Christmas season from about 1500 onwards and the traditional carol developed, irrespective of changing musical styles, over the next 400 years. The present collection groups some of the most famous carols from the eighteenth and nineteenth centuries, together with more recent examples, and concludes with one of the great twentieth century choral masterworks—Benjamin Britten’s A Ceremony of Carols.

Away in a Manger is one of the most famous of all and, like many carols, is of German origin. At one time it was even spuriously attributed to Martin Luther and was called ‘Luther’s Cradle Song’. However its melody is definitely from the mid nineteenth century and it first appeared in print as late as 1884.

The tune of In dulci Jubilo (In sweet rejoicing) first appears in the Codex 1305, a manuscript dating from about 1400 preserved in Leipzig University, but may date from an earlier time. Using a macaronic text (a blend of Latin and German) it was printed widely in collections from the 1530s onwards. Robert Pearsall’s lovely arrangement of 1837 is the version most often used today.

O Come All Ye Faithful is a cornerstone of the eighteenth century carol tradition and was originally sung in Latin as Adeste Fidelis. John Francis Wade (1711-1786) is the composer, although some sources attribute the melody to King John IV of Portugal from the mid sixteenth century. The English words are by a Roman Catholic Priest, Frederick Oakley and date from 1841, while the harmonisation used today comes from the English HymnalM of 1906.

Two very recent carols by the young English composer Jonathan Roberts (born 1983) were written expressly for the Armonico Consort, as part of their regular educational workshops, with which he has been much involved. Hope Finds a Way is to a deeply felt text by Jonathan’s father, the Rev Vaughan Roberts, and like Britten’s Ceremony of Carols, is scored for treble voices with harp. The second carol is appropriately entitled Mistletoe.

Silent Night is originally from Austria (Stille nacht, heilige Nacht), composed by Franz Gruber in 1818 and possibly the most famous carol of all, having been translated into over 140 languages. It was even awarded the curious title of Intangible Cultural Heritage by UNESCO in 2011. In this anniversary year of the centenary of the Great War, it is worth remembering that Silent Night was sung simultaneously in French, English and German by troops, during the famous Christmas truceof 1914, as it was the one carol that soldiers on both sides of the conflict actually knew.

The Sussex Carol does not appear to have its origins in Sussex. Its words were first published by the Rev Luke Wadding, a seventeenth century Irish bishop, in a work called Small Garland of Pious and Godly Songs (1684). Its later association with Sussex appears to be through Ralph Vaughan Williams, who heard it being sung by a Harriet Verrall of Monk’s Gate, near Horsham, Sussex (hence 'Sussex Carol'). The tune to which it is generally sung today is the one Vaughan Williams took down from Mrs. Verrall and then published in 1919. The arrangement by Sir David Wilcocks heard on this recording is especially fine.

Once in Royal David’s City began life as a poem by Cecil Frances Alexander (also responsible for All Things Bright and Beautiful) The carol was first published in 1848 in Miss Cecil Humphreys’ hymnbook Hymns for Little Children and a year later, the organist Henry John Gauntlett set it to music. Since 1919, the Festival of Nine Lessons and Carols on Christmas Eve at Kings College, Cambridge, has used this famous carol as its Processional.

O Magnum Mysterium is a responsorial chant from the medieval Choral Matins for Christmas. A large number of composers have reworked the chant into a contemporary setting and there are famous examples by Byrd, Victoria, Gabrieli, Palestrina, Poulenc and many others. The work recorded here is by the modern American composer Morten Lauridsen (born 1943) and dates from 1994, although it respects its ancient stylistic antecedents.

God Rest You Merry Gentlemen is a traditional English carol first published in its present form in 1833 by William B. Sandys, though its author is unknown. The earliest known publication of the carol appears on a rare 1760 broadsheet, where it is described as a 'new Christmas carol', suggesting its origin is actually from the mid-eighteenth century. It became famous after it was referred to in Dickens’ A Christmas Carol in 1843, when: ' …at the first sound of ‘God bless you, merry gentlemen! May nothing you dismay!’, Scrooge seized the ruler with such energy of action that the singer fled in terror …'

Ding Dong Merrily on High is another carol from the 16th century that has become synonymous with the festive season. The tune first appeared in print in a book entitled Orchésographie, circa 1550, although the words by George Ratcliffe Woodward date from the twentieth century. Charles Wood harmonised the famous tunewhen it was first published with Woodward’s text in The Cambridge Carol Book in 1924.

Have Yourself a Merry Little Christmas is not a Christmas Carol as such, having started life in a famous Hollywood musical of the mid 1940s—Meet Me in St Louis—in which it was sung by Judy Garland. It was written by Hugh Martin and Ralph Blane and has been recorded by almost every major popular singer since. Over the years, its lyrics have been frequently altered and it has recently become a favourite item for choirs, for concert use. The present a capella arrangement by composer Peter Gritton, director of music at St Paul’s School, dates from 1989.

Benjamin Britten A Ceremony of Carols, Opus 28
Britten’s first published choral work was A boy was born in 1933 and it heralded the arrival of a major figure in the setting of words to music, who would eventually become a worthy successor to Henry Purcell. It is interesting that his next major choral work would also focus on the story of the Nativity, clearly a theme which resonated with Britten.

A Ceremony of Carols, Op 28, is scored for three-part treble or soprano chorus, solo voices, and harp and consists of eleven movements, with texts drawn from medieval and 16th century poems. Most of it was written in 1942, about the same time as the Hymn to St Cecilia (with which the work shares certain stylistic similarities) and it was actually composed while Britten was at sea, returning from the United States to England after a fairly unhappy period of self-imposed exile in California. During the long voyage, the ship berthed at Halifax, Nova Scotia, where Britten came across a book of medieval poems and immediately began to set them, but without any fixed plan of the work as we know it today.

The unusual addition of the harp may have been because Britten had intended to write a harp concerto at this time and had been studying the instrument. The harp solo which comes about half way through, is based on the same opening plain chant, along with a few other motifs from the first carol, Wolcum Yole, to further unify the composition. In addition the later movements This Little Babe and Deo Gracias have the choir declaiming harp-like effects, by employing imaginative and complex canonical devices.

The collection only became a cycle when Britten added a framing processional and recessional chant, sung in unison, based on the Gregorian antiphon Hodie Christus natus est (Today, Christ is born). Incidentally, this framing device is reminiscent of Holst’s Hymn of Jesus written some 20 years earlier, a work undoubtedly known to Britten.

Throughout, Britten is most particular in his focus on choral resonance and many of his vocal effects are clearly designed to reflect the considerable acoustic possibilities afforded by a traditional church space, rather than a concert hall. The remarkable variety of moods and the exciting contrast in his frenetic rhythms, together with the complex melodic interplay between the individual lines makes A Ceremony of Carols one of the most difficult and rewarding twentieth century choral works to perform.

The first (incomplete) performance took place (not under Britten’s direction) on December 5, 1942 at Norwich Castle by the Fleet Street Choir. In 1943, Britten added That yonge child and the solo harp interlude. It is interesting to note that originally, Britten specified women’s voices. Only somewhat later did he become convinced that it would be better suited to boys, perhaps to underline the innocence and freshness of the story and its special importance for children, the world over. He also seems to have been influenced in this by several fine rehearsal-performances in the run up to its London premiere at Christmas 1943.

As he wrote to his friend Margaret Mayer: '(the carols) have had a series of thrilling shows by a choir of little Welsh boys …!' This was the boys’ choir of Morriston School, Swansea and the work indeed finally received its first complete performance by them, on December 4 that year, at the Wigmore Hall, with Britten conducting. A few days later, in a letter to Mary Behrend, one of his wealthy patrons (she commissioned the String Quartet No 2 in 1945) Britten wrote 'I think the little boys were enchanting—the occasional roughness was easily overweighed by their freshness and naiveté …'. In fact, this happy experience was to influence Britten towards writing for boys’ voices on numerous subsequent occasions. Nowadays of course, it has been sung by a wide variety of different vocal ensembles and A Ceremony of Carols, one of Britten’s most successful and almost instantly popular compositions at the time, has takenits rightful place as a masterwork, whose popularity has never diminished.