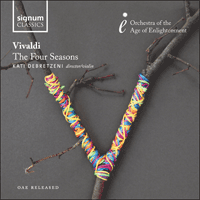 Kati Debretzeni (violin), Orchestra of the Age of Enlightenment

With its vivid poetry and technical ingenuity, Vivaldi’s Four Seasons was ground breaking at the time of its release and to this day remains as influential and transfixing as ever. In this recording, violinist Kati Debretzeni directs the Orchestra of the Age of Enlightenment in an energetic, historically informed performance. From the commanding heat of the Summer sun, to Winter’s foreboding darkness, the power of Vivaldi’s masterpiece is inescapable.

The booklet includes a ‘Guided tour of the Four Seasons’, allowing listeners to follow the poetry that inspired Vivaldi as they hear the performances on the disc, including additional composer’s notes from Vivaldi’s own scores.

'So many recording of The Four Seasons tend to play the notes, often with little regard to the descriptive painting of the text in the music. In this excellent recording not only is the music so vividly portrayed by the players (soloist and OAE alike) that the text is almost implied, but the booklet supplements this by providing the sonnets (in both Italian and English translation). It also gives the timings in the recording of the letters that the composer gives in the score, enabling the listener to follow precisely every line of the poems represented in the music. Kati Debretzeni's playing is both technically impressive and imaginative. I enjoyed her subtly ornamented lines and the tasteful rubato, which always added a subtle point of repose in the music. This is probably one of the noteworthy period-instrument 'Seasons' recordings' (Early Music Review)
'The leading period-instrument ensemble, the Orchestra of the Age of Enlightenment, has never before recorded Vivaldi 's evergreen The Four Seasons. The OAE's leader—Transylvanian-born violinist Kati Debretzeni—has often played and directed the work live, to great critical acclaim. The Independent commented that she 'may rival Nigel Kennedy in both showmanship and virtuosity.' Particularly, this version of the work accompanied performances in which the OAE fused authentic performance with contemporary choreography. Debretzeni sets out to highlight the descriptive aspect of the music by finding many more colours and contrasts in the orchestral texture than are usually heard, and the period instruments give the familiar movements a new attack, making the work sound as fresh today as the day it was written' (Classic FM)

A dashing figure with long, flowing auburn hair and boyish good looks, Vivaldi was the musical pin-up of Baroque Venice. His vast musical output includes an astounding 500+ concertos, 86 solo and trio sonatas, some 46 operas and a substantial quantity of vocal music. He originally studied for the priesthood and received Holy Orders in 1703, earning the nickname 'Il prete rosso' (‘the red priest’) on account of the distinctive colour of his hair. Yet following his ordination, Vivaldi turned his back on the church and went in search of ‘worldly’ musical employment. Just a few weeks later he was appointed maestro di violino at the Pio Ospedale della Pietà, one of four orphanages for girls in Venice. This was to remain his musical base for the greater part of his life, and it was for the highly gifted students at the Pietà that he composed much of his music.

The Four Seasons forms the first third of a collection of twelve violin concertos published together in 1725 as 'Opus 8' with the overall title Il Cimento dell' armonia e dell' Inventione ('The Trial of Harmony and Invention'). The concertos broke new ground not only in terms of their detailed depiction of poetic ideas, but also their technical ingenuity—most noteworthy in this regard are passages of rapid string-crossing with the bow and high-flying virtuosity for the left hand.

Vivaldi’s Four Seasons is the one piece of Classical music (alongside Mozart's Eine Kleine Nachtmusik) that is ubiquitously present in our lives. From lifts to ring-tones, there is no escaping it. The subtleties of its programme, however, are not always as evident. We all know that the birds sing at the beginning of Spring, but do we hear the peasants stagger around in a drunken stupor in Autumn? Are we aware of the relentless rain, or of people ice-skating and falling over in Winter? This Bruegel-esque musical scene-setting is one of the outstanding facets of the work, and Vivaldi is very specific when describing what his music should represent. So specific, in fact, that he writes a capital letter in front of every line of the sonnets he composed to accompany the concerti. These letters appear in the score at relevant places, and Vivaldi elaborates further by adding brief descriptive notes to the various instrumental parts.

Here is a 'Guided tour of the Four Seasons', imparting those comments. The timings of the album refer to the point in the score where the capital letters appear above the staves, linking the poems to the music. Vivaldis comments, as printed underneath the various instrumental lines, are also given with their respective timings.

May it add another layer to your listening experience.