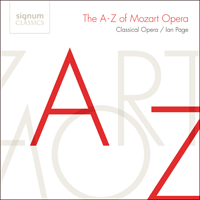 The A-Z of Mozart Opera

Signum is proud to reissue Classical Opera’s debut album, ‘The A-Z of Mozart Opera’, selected for Gramophone magazine’s annual Critic’s Choice in 2007. Based on the coincidence that Mozart’s first opera (Apollo et Hyacinthus) begins with ‘A’ and his last (Die Zauberflöte) with ‘Z’, the programme takes the listener on a chronological journey through Mozart’s operatic canon, featuring an aria or ensemble from fifteen of his operas.

'First released in 2007, this is the CD that introduced Ian Page's Classical Opera to disc. It offers a whirlwind traversal of Mozart's operas in chronological order, including extracts from no fewer than fifteen of the 22 (if unfinished works are included). Page, to my mind one of the most talented of today's younger British conductors, immediately announced himself with this CD as a natural Mozartian. Indeed, one of the chief pleasures is the juxtaposition of graciously phrased cantabiles—listen, for example to the line he achieves in the delectable 'Ruhe sanft' (Zaide)—and the dramatically incisive rhythms of an aria like 'Se vuol ballare' (Figaro), all splendidly played … possibly it could serve as an introduction to a newcomer to what is arguably the greatest of all operatic canons? That it will do admirably' (Early Music Review)» More
'This splendid recording will surely whet your appetite for the complete operas' (Early Music)» More

This recording takes its inspiration from the coincidence that Mozart’s first opera begins with ‘A’ and his last with ‘Z’. Considering the almost universal appeal and popularity of his music, it seems extraordinary that less than half of Mozart’s operas command a regular place in the repertoire of the world’s opera houses, and this chronological journey offers the opportunity not only to see how his genius developed between Apollo et Hyacinthus and Die Zauberflöte, but also to appreciate the immense range and versatility of his writing. Of course no one can pretend that the early operas are as accomplished as the masterpieces of his maturity, any more than one would argue that the plays of Shakespeare are all uniformly great, but like Shakespeare, Mozart had a staggeringly profound and compassionate understanding of human nature which, to a greater or lesser degree, shines through in every one of his stage-works.

This is even true of the first three operas—Apollo et Hyacinthus (1767), La finta semplice (1768) and Bastien und Bastienne (1768)—all written before Mozart became a teenager, and the first two in particular contain numerous intimations of the beauties and expressive depths to come. The duet ‘Natus cadit’ from Apollo et Hyacinthus, in which father and daughter lament their estrangement from the god Apollo, is symptomatic of the young composer’s unerring ability to capture the mood and emotional truth of a dramatic situation.

At the beginning of the 1770s, Mozart’s father took him on three separate trips to Italy—still considered the ideal training ground for aspiring composers and singers—and each trip culminated in the première of a new opera in Milan. These were Mitridate, re di Ponto (1770), Ascanio in Alba (1771) and Lucio Silla (1772), and they each reveal Mozart’s growing assurance and mastery of his craft. In December 1771, though, Archbishop Schrattenbach of Salzburg died, and his successor, Archbishop Colloredo, took a far less favourable view of the Mozarts’ frequent absences.

For the rest of the decade they were required to stay in Salzburg and fulfil their duties as court musicians, and for Wolfgang the only meaningful exceptions were a trip to Munich to supervise the première of La finta giardiniera in 1774–75, and the ill-fated visit to Paris in 1778–79, during which his mother died. In Salzburg he was commissioned to write Il re pastore in 1775 in honour of a visiting archduke, but he found his home town parochial and limiting, and was increasingly frustrated by its lack of a proper theatre. In 1779–80 he began work on a new opera in German, Zaide, but he was destined never to finish this intriguing work.

It was with the composition of Idomeneo, commissioned for the 1781 carnival season in Munich, that Mozart really came of age as an opera composer. It received its première a couple of days after his twenty-fifth birthday, and remains to this day one of his greatest and most underrated masterpieces. The work is charged with an elemental energy which drives the drama forward with visceral force, and recitatives, arias and ensembles lead into each other with a seamless flow. Nowhere is this more evident than in the extraordinary quartet from the final act, where all four characters give vent to their various states of anguish and misery.

Idomeneo provided Mozart with the acclaim and the confidence to escape at last from his servitude in Salzburg, and in 1781 he made a famously acrimonious break from Archbishop Colloredo and set up as a freelance composer in Vienna. He soon received a commission to write a new German comedy, Die Entführung aus dem Serail, which was first performed at the Burgtheater on 16 July 1782, and the next few years were among the happiest of his life. But while he continued to pour out a seemingly endless supply of new music, he struggled to find the right material for his next opera. He started but failed to complete both L’oca del Cairo and Lo sposo deluso, and in 1786 wrote the one-act comedy Der Schauspieldirektor for a performance in the gardens of Schönbrunn Palace, but it was his collaboration with the librettist Lorenzo da Ponte which took his operatic writing onto a new level. They collaborated on three operas, Le nozze di Figaro (1786), Don Giovanni (1787) and Così fan tutte (1790), and this famous sequence of works represents the pinnacle of Mozart’s achievement as an opera composer.

By the summer of 1791, though, Mozart was out of favour at the Viennese court, debt-ridden and in ill-health. He agreed to collaborate with Emanuel Schikaneder on Die Zauberflöte, a magnificent vaudeville comedy written specifically for the ‘popular’ audiences at the Theater auf der Weiden, and when this work was almost completed, Mozart received a commission to write a new opera for Prague to celebrate the coronation of the new Emperor Joseph II as King of Bohemia. He allegedly wrote La clemenza di Tito in an astonishing eighteen days before returning to Vienna to complete Die Zauberflöte, the première of which he conducted on 30 September, but before the end of the year he was dead. It is tempting to view his tragically short career as a perfect, inevitable whole, possessing the same symmetry that marks his operatic voyage from A to Z. But one cannot help wondering what might have been had he lived as long as such contemporaries as Haydn, Gluck or Salieri.