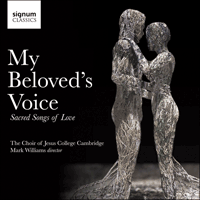 Mark Williams leads the Choir of the Jesus College Cambridge through an evocative selection of choral works inspired in varying ways by the Songs of Songs.

Songs of love have been written from the earliest records of human existence. None are more passionately ecstatic than the Songs of Songs, which occupies a unique place in the Holy Bible in both style and content. It contains lyric poems of love and courtship, as might have been sung at Jewish weddings. For Christians, these poems speak to the beauty of the union of Christ and his ‘bride’, the Church. The present collection presents a diverse group of choral works written between the 16th century and the present day, with most inspired by this unique sacred text.

'This is a fine and enjoyable disc, full of vivid performances and imaginative programming. Under Mark Williams' direction, the choirs make a clear elegant and focused sound, and clarity is very much the watchword in the performances' (Planet Hugill)» More

Songs of love have been written from the earliest records of human existence. None are more passionately ecstatic than the Song of Solomon, which occupies a unique place in the Holy Bible in both style and content. It contains lyric poems of love and courtship, as might have been sung at Jewish weddings. For Christians, these poems speak to the beauty of the union of Christ and his ‘bride’, the Church. The present collection presents a diverse group of choral works written between the 16th century and the present day, with most inspired by this unique sacred text.

The earliest examples on this recording all date from the early 16th century. Antoine Brumel (c1460–c1515) was a French composer and was ordained in the Roman Catholic Church. His serene motet Sicut lilium inter spinas sic amica mea inter filias (As the lily among thorns, so is my love among daughters) appears in the Medici codex of 1518. This short and simple piece has a special atmosphere of quiet serenity. Martín de Rivafrecha (c1479–1528) is even more enigmatic than Brumel and very little is known about him. He was also a priest and spent most of his career as Kantor of Palencia Cathedral, though regrettably hardly any of his music has survived. The manuscript of Anima mea liquefacta est ut dilectus meus (My soul melted when my beloved spake) is fortunately preserved in the Biblioteca Columbina of Seville. Jacob Clemens non Papa (c1510–c1556) was a prolific Flemish composer of the high Renaissance, based mostly in Flanders. His sacred motet Ego flos campi (I am the Rose of Sharon) is one of over 230 known examples and dates from about 1540. It is an unusually complex setting for seven separate vocal lines, with its concurrent melodic streams nevertheless attaining a satisfying cohesion.

Pablo Casals (1876–1973) is arguably the most famous cellist of the past century. A Catalan, he was also a renowned teacher and conductor, but his compositions are now somewhat neglected. His setting of the verse Nigra sum (I am black but comely) has become popular however, with its lovely, unusual, quasi-operatic melodic turns. It was written in Prades (where he was in exile from fascist Spain) for the boys’ choir of Montserrat Cathedral in 1943, the same year that he began composing his oratorio El Pessebre (The Manger) with which, stylistically, it has much in common. Healey Willan (1880–1968) was a prolific British composer and organist, spending most of his career in Canada. He has over 800 works in all genres to his credit. Rise up my love dates from 1929. The text for I beheld her is taken from an 8th century hymn to the Blessed Virgin Mary, but is no less passionate in tone. Willan was devoted to the Gregorian tradition, as can be heard in these two simple but effective pieces. Edward Bairstow (1874–1946) was almost his contemporary and equally admired as an organist, particularly at York Minster. He wrote a number of large-scale choral works, but it is perhaps his miniatures that are the most effective, of which the anthem I sat down under his shadow dating from 1925, is a particularly choice example.

From the somewhat later English tradition come the exact contemporaries William Walton (1902–1983) and, Edward Bairstow’s noted pupil, Gerald Finzi (1901–1956) with Set me as a seal and My lovely one respectively. Walton’s piece (using a famous extract from the Song of Solomon), with its typical, ravishing, late-romantic harmony, was composed in 1938 for the marriage of his friends Ivor Guest and Lady Mabel Fox-Strangways. Finzi’s piece is also a marriage anthem and dates from 1946. It sets some post-metaphysical verses by the 16th-century poet Edward Taylor that share, with the Solomon text, the mood of impassioned devotion for a loved one.

The Norwegian composer Edvard Grieg (1843–1907) wrote his Four Psalms for mixed choir and baritone in 1906 and these are in fact his very last compositions before his death the following year. The text of How fair is thy face (in an English translation by Percy Grainger) does not come from the Song of Solomon but is from a 17th-century hymn of rapt devotion to Jesus Christ with strong echoes of the biblical love songs. While the music is rooted in traditional folk idioms and quasi-historic psalmody, there are also some surprising new sounds in Grieg’s harmonic palette, which indicate a possible new direction his music might have taken, had he lived. The French composer Louis Vierne (1870–1937) is one of a long line of French and Belgian organ composers, among them Widor, Dupré, Franck and Messiaen. He is mostly associated with grandiose organ works, particularly six impressive organ symphonies, yet in his Pièces de fantaisie perfected the art of the miniature. The theme of love and devotion is continued here in the understated Aubade from the Fourth Suite Opus 55—an aubade is actually a morning love song, sung by a troubadour below the window of his beloved. Written in 1927 and cast in a simple ternary structure, it offers a haunting, relentlessly undulating melodic line with a restless chromaticism entirely typical of the composer.

Patrick Hadley (1899–1973) was a Fellow of Gonville and Caius College Cambridge and a pupil of Vaughan Williams. His music (like that of his teacher) reflects a love of folk idioms although his small output is rarely encountered today. This setting of My beloved spake dates from 1938 and also exists in an orchestral version. The harmony is ravishing, although there is undoubtedly a sardonic nod to the serialists of the New Viennese School—whom he loathed—at the line ‘The Fig tree putteth forth’, in which all twelve notes of the chromatic scale appear within just two bars, albeit within a highly tonal framework. At the hushed conclusion, Hadley allows his music to fade away after the final climax on the words ‘come away’ to magical effect.

Composers in the 21st century continue to be fascinated by the Solomon verses, as can be seen in the works by Howard Skempton (b1947) and the American Nico Muhly (b1981) included here. Howard Skempton has published over 300 works, and his musical style seems to have been totally unaffected by trends or fads. Rise up my love was a commission by the Estonian Philharmonic in 2002 and offers four short settings of texts from the Song of Solomon. The first, which gives the work its title, is for mixed voices characterised by a simple, flowing structure. How fair is thy love offers a change of vocal colour, using the basses in unison at the bottom of their register, over a sustained note from the tenors; it is particularly effective. My beloved is gone down is in four-part close harmony for sopranos and altos and the final movement How fair and how pleasant returns to SATB mixed voices, marked by slow chordal writing.

Nico Muhly, the youngest composer represented here, is also the most eclectic. He has collaborated with (among many others) Philip Glass, Britten Sinfonia, Bjork and various rock bands and he is the youngest composer ever to have been commissioned by the New York Metropolitan Opera. He is known for his love of the Anglican choral tradition and his commission for the Choir of Jesus College Bright Star Carol may be heard on their disc Journey into Light. It is interesting to compare Muhly’s 2003 setting of Set me as a seal with that by Walton. Muhly innovatively uses both the Hebrew words and their English translation, while the piquant colour of the busy piano accompaniment clearly betrays the influence of Philip Glass and acts like a relentless commentary on the vocal line. Robert Walker (b1946), a former organ scholar of Jesus College Cambridge, is perhaps best known for his expert realisation of Elgar’s unfinished Piano Concerto in 1998. The serene anthem As the apple tree was written for his nephew’s wedding in 1985 and, in its closing pages, creates an effect of mysterious beauty through the use of unmeasured hushed statements of the opening theme, sung ‘at will’ by each member of the choir.

Two items not related to the Song of Solomon are nevertheless complementary. Maurice Duruflé (1902–1986) belongs (like Louis Vierne) to the grand French tradition of organist composers although his output was very small indeed. Ubi caritas—Where there is love and charity, God is there—is a devotional hymn, long associated with Christ’s washing of the feet on Maundy Thursday. A Gregorian melody (dating from before the 10th century) provides the melody for the piece, although Duruflé harmonises only the refrain and opening stanza. Finally, Samuel Sebastian Wesley (1810–1876) and his noble and deeply felt motet Blessed be the God and Father. It was written in 1834 for the Easter Sunday service at Hereford Cathedral and, from the hushed opening, is characterised by Wesley’s typically elegant, long phrases. An uplifting and triumphant conclusion—But the word of the Lord endureth for ever—follows a beautiful treble solo—Love one another with a pure heart fervently.