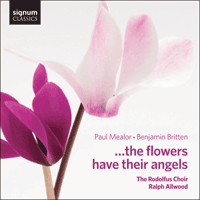 Mealor & Britten: … the flowers have their angels

The Rodolfus Choir marks both Benjamin Britten’s centenary year and the 30th anniversary of the choir’s first concert. The album includes the premiere recording of Paul Mealor’s Praise, commissioned especially for the choir.

Although Britten’s engagement with a huge variety of poetic and other texts was stimulated most profoundly by his friendship with WH Auden in his twenties, it is clear from diary entries and early musical essays that the composer was already hugely enthusiastic for the inspiration that words could bring to his music even from childhood. The finest early example is surely A Hymn to the Virgin written whilst the 16-year-old boy composer was in the school’s sanatorium. The macaronic text alternates medieval English words sung by the full choir with Latin responses, taken by a quartet or semi-chorus. The melodic lines are elegant and the harmonic language has a diatonic simplicity that occasionally allows flickers of an earlier English choral language to appear: there are some cadences on bare chords without a mediant and a mixture of major and minor colours close together, redolent of much Tudor music. What must have impressed its first audience at a Lowestoft Musical Society concert in January 1931 was the directness of expression that this youthful piece articulated so convincingly and maturely. The strident Catholicity of the medieval text, anathema to that most parochial of audiences, went without comment by its listeners then, as so often, today; the graceful and powerful music says it all.

The music that Britten wrote in the early 1940s, following his return to Great Britain from America—and whilst he was progressing on the composition of Peter Grimes—has a remarkable energy and vitality. Still today, 60 years or so after the first performance of Rejoice in the Lamb, Op 30, it is striking how vividly and brilliantly Britten responds to the witty, idiosyncratic words of poet Christopher Smart. The text is a celebration of the creator God found in all things. It begins with a hushed prayer that leads on to an invocation of a whole series of Old Testament characters sung to some thrilling, rhythmically taxing, music. Then follows a contemplation of the poet’s cat Jeoffry and the animal’s awareness of his maker; here a solo vocal part converses playfully with an obbligato organ line just as a cat might be teased with a ball of wool. Further meditations follow—on a mouse and on flowers, both also reflections of their creator’s greatness—before the concluding sprint through an animated parade of musical instruments and a graceful Purcellian ‘Hallelujah’ that neatly brings the work to a close. It is perhaps typical of Britten that he responded to Walter Hussey’s invitation to compose a piece for an Anglican church service by writing something that was so far away from the manner of other contemporary church music. There is music here that has a deep poignancy in its most contemplative moments but it is delightfully boisterous and almost comical in the fast-moving sections.

In his published oeuvre Britten focused almost exclusively on writing for musicians to play together in ensembles. As a performer he devoted much time to his work with tenor Peter Pears, and the composer’s Aldeburgh Festival appearances included duets with fellow-pianist Richter and accompanying cellist Rostropovich. The Prelude and Fugue on a theme of Vittoria is one of Britten’s rare forays into solo writing; it was the only organ solo by him published during his lifetime. Written in 1946, again at the behest of Walter Hussey, this work has none of the fun of Rejoice in the Lamb. The work’s seriousness is rooted in the plainsong-like melody from the motet Ecce sacerdos magnos, which appears initially as a bold opening statement on the pedals and then in a more demure manner as the theme forms the brooding fugue. The work has had a mixed reception, but the accusation that the composer wrote it in bed one morning before getting up for breakfast seems a little unkind and is certainly untrue. The piece really needs a rather large organ to capture the variety of colours and moods evoked by the composer.

If Britten abjured the manner of his immediate English predecessors and contemporaries in the sacred choral music of the forties, in the Five Flower Songs Op 47, first performed in the spring of 1950 he directly emulated it. Here are five charming pieces, written for botanical enthusiasts Dorothy and Leonard Elmhirst of Dartington, that follow in the line of pastoral English part-songs, the staple diet of Edwardians Elgar, Parry and Stanford. The songs move from the delicate imitative music of the Herrick setting To daffodils to a more wistful approach in The succession of the four sweet months by the same poet. Then comes Marsh flowers by George Crabbe; this poet wrote the original poem of Peter Grimes and Britten retained a fondness for him throughout his life. The melodic lines are more angular here and the harmonic language frequently pushes away from the more stable world of the first two songs as the composer describes a series of less immediately attractive plants such as the ‘slimy root’ of the strong mallow or ‘dull nightshade’ with her ‘deadly root’. John Clare’s The evening primrose returns us to a more gentle and pensive world and this short cycle finishes with a boisterous rendition of the Ballad of green Broom, as the singers tell the cheerful tale in music of increasing pace and virtuosity.

Paul Mealor’s short Now sleeps the Crimson Petal consists of four linked madrigals on texts referring to roses either directly or as a metaphor for love.

The eponymous first song sets a sensual poem by Tennyson in which the closing of flowers as night draws on suggests the union of two lovers. The setting is delicate and reflective but exploits the full range of the choir’s vocal resources. Lady, when I behold the roses sprouting uses a typical English madrigal text, paraphrased from a 16th-century Italian original. The play of dual tonalities expresses the poet’s flattering confusion: is he seeing his lady’s red lips or the petals of a rose? Upon a bank with roses set about contrasts a peaceful pastoral idyll with the sharp pain of a thwarted lover. Fast-moving and quiet, the music evokes a murmuring brook with micro-polyphony and rippling lines, interrupted when the voice of wounded Love is briefly heard.

The final poem, a setting of the Christmas text A spotless rose, is the emotional heart of the cycle, recalling the musical material of all the other three movements. An aural depiction of the petals of a rose unfurling culminates at the words ‘fairest bud unfolds to light’, and the cycle comes gently to rest on a rich B major chord.

The five songs of praise to God take various texts by some of my favourite hymn writers and poets and mould them into one, continuous, devotional anthem. The structure of the cycle is arch-like in design with the two outer movements sharing similar musical material; movements two and four sharing similar material, and the third, central movement reflecting upon material used in all five movements. In fact, the third movement is the emotional heart of the work setting Geoffrey Rowell’s powerful Eucharistic hymn of Christ’s love and sacrifice in a slow, meditative and all-encircling manner.

The compositional inspiration for the entire cycle is that of ‘change ringing’ or, more specifically, the art of ringing a set of tuned bells in a series of mathematical patterns, as we find in churches and cathedrals throughout the world. This musical motif, often a call to prayer in most Christian countries, is explored in many different ways throughout my cycle with the voices themselves becoming the change-ringing bells in the fourth movement and, the inner, most intimate sound of the bell explored through the use of the Tibetan singing bowl, in the second movement with the voices actually becoming the ‘harmonics’ of the bell.

The poetry of the 18th-century mystic, Christopher Smart has long been an inspiration for me and, rather unusually, I have chosen to set two extracts from his glorious poem, ‘A Song to David’ as ‘meditations’ upon spirituality as the two central movements here. Smart’s poetry is cluttered with powerful and colourful images; though, in my selections, I have tried to focus on two recurring images—that of God’s beautiful creation, the earth and, his redeeming light given to us through the birth of Christ. For me, these images strike at the very heart of Smart’s work and offer moments of reflection within my own choral cycle.

Praise is a celebration and was composed as a as a kind of companion piece to Benjamin Britten’s Rejoice in the Lamb and to celebrate Britten’s centenary year of 2013.

Praise was commissioned and is dedicated to Dr Ralph Allwood MBE & The Rodolfus Choir and was premiered by them on their tour of Oxford and Douai Abbey between 28th December 2012 and 5th January 2013.